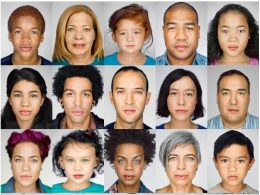 East Asians who migrate to America have been seen historically as the “model minority,” so much so that Asians – and the country of Singapore – are both commonly cited as examples of civic nationalism “working.” It occurred to me that if there was ever a group of people who could be considered “naturally conservative,” that title would most certainly apply to Asians, long before it would apply to Hispanics.

Asians in the United States do indeed appear to be model citizens at first glance. Asians use welfare at a slightly lower rate compared to whites (21.8% and 23.1%, respectively), have a lower rate of single-parent families, a higher rate of obtaining college degrees, and higher average incomes. Asians also boast the highest level of entrepreneurship in the United States, with the highest ratio of businesses to population size.[1]

Over the past twenty-five years, however, there has been a trend of Asians in America becoming increasingly liberal. This, along with issues of social cohesion among groups that seem to have assimilated well, leads us to what I call the “Diaspora Question.”

In 1992, 55% of Asian citizens were Republican voters. By 2012, 73% were voting Democrat. In the 2016 presidential race, Clinton garnered 65% of the Asian vote. The cause of the majority of Asian voters swinging so wildly to the Left appears to be the issue of immigration becoming prominent. Data and election results show that Asians vote against candidates with anti-immigration platforms, even if all other issues are in line with their interests. Although Asians currently make up only 4% of the US population, they are now the fastest-growing population segment. With that, we are seeing a heightened level of ethnic activism and the accompanying behaviors of a diaspora population, not only in regards to open borders but other, more liberal attitudes as well, such as 75% of Asians saying that gun control is more important than protecting the right to bear arms, compared to 40% of whites with the same sentiments. The majority of Asian citizens now say they would prefer a larger government with more services, as opposed to the opposite. This view is shared by the majority of blacks and Hispanics as well; only whites support smaller government. In Asian nations, they are faithful adherents of nationalism, tradition, and cultural preservation; in our nation, they support the erosion of our nation, our traditions, and our culture.

The fact that Asian citizens have begun to favor open-borders candidates now that immigration has become a high-profile issue once again is extremely subversive and duplicitous behavior. East Asian nations tend to be among the most traditionalist, xenophobic, nationalist, protectionist, and closed to immigration of anywhere on Earth. The Chinese, Koreans, and Japanese all have ethnically-defined homelands that do not accept hordes of outsiders, whether economic migrants, refugees, or any other type. Asians, like Jews, have the advantage of an ethnic homeland, yet as a diaspora population, they vote and advocate for open borders in their host nations.

One such example of this diaspora dynamic is Cecillia Wang, an ACLU legal director who has made a career of fighting to keep America’s borders open and to protect criminal aliens. One wonders why Wang does not fight to open China up to the world’s indigent. Surely the Han Chinese, who make up over 90% of China’s population, could use some “enrichment” from Somalis, Afghans, and Algerians. Shanghai deserves their Halal carts, too, do they not?

Korean migrant Sarah Jeong is another example of the Diaspora Question in action. Jeong, a recent hire to the New York Times (NYT) editorial board, has written many things about her host population. Among them: “Dumbass fucking white people marking up the internet with their opinions like dogs pissing on fire hydrants,” and “oh man it’s kind of sick how much joy I get out of being cruel to old white men.” Eli Rosenberg of The Washington Post and Zach Beauchamp of Vox, among others, both rushed to write apologias for Jeong, replete with sophistry and fiat definitions in pathetic attempts to indemnify her. Senator Brian Schatz (D-HI) also expressed his support on Twitter for the anti-white NYT editor, writing “I’m with @sarahjeong. Enjoy your weekend.” Schatz, Rosenberg, and Beauchamp circled the wagons around the Korean migrant as if she were one of their own. I found it fascinating that there was such a similarity in behavior and immediate kinship between these two diaspora groups. They came to a nation that was created and made great without the help of any of their ancestors, then claim victim status and manipulate words to explain away their anti-white vitriol, all while being as antagonistically ungracious as possible.

What people like Wang and the majority of the Asian population in America clearly want is to retain their ancestral and ethnically-defined homelands while simultaneously benefiting from every possible privilege in the nations we built for ourselves. Asians who have absolutely zero connection to our nation can come and are then granted instant “minority” status, along with all the educational, governmental, and corporate benefits this entails. This is irrefutable proof that the benefits granted to the members of so-called minority groups in the US is not about redressing historical grievances but instead is about creating hostile, anti-white situations.

When we hear the daft trope that Hispanics or Asians are “natural conservatives,” in a very nuanced way it is indeed correct. The nuance is that “conservatism” is entirely context-dependent. Two groups may both be trying to conserve something, but that something may be at odds. When people say Hispanics or Asians are naturally conservative, what they are naturally conserving is their own homeland, their own identity, their own culture – not ours. The only cultures the Mexicans or the Japanese can conserve is Mexican and Japanese culture. As a diaspora in our homeland, they continue to try to conserve what is in their own ethnic interests. That very often happens to include open borders, which is antithetical to what we are trying to conserve. We cannot conserve our heritage, identity, culture, people, or nation with the demographics of Mexico or China or India. This is the crux of the Diaspora Question and one of the unavoidable fatuities of civic nationalism.

The final, and perhaps most difficult, component of the Diaspora Question is the notion of the theoretical “perfect” non-white migrant. Let us assume that Asians never shifted so strongly to the Left due to their desire to keep our borders open, and that they continued to own small businesses, support free speech, favor closed borders, and all the other typically conservative American ideals. Would civic nationalism work in that case? Not at all. We will still run into the inevitable issue of seeing our social cohesion destroyed and social capital diminished due to the disparate nature of our cultures. Even if identical civic values were adopted by the diaspora populations among us, all available data undeniably shows that the mere existence of racial diversity leads to enormously negative outcomes: lower trust in government, in each other, and in the media; social isolation; lower levels of happiness; and deracination are the results of racial diversity. The complete and total breakdown of a meaningful civilization is the end result of civic nationalism. It is an ideology destined for failure from its inception.

There was always another nagging issue I had with civic nationalism. This brand of “nationalism,” one that is defined by a people being assimilated to ideals, has never had a solution for dealing with those who do not assimilate. If we take civic nationalism at face value, and if we were to agree that our nation is one of ideals and not of blood, shouldn’t we have a system in place for dealing with those who do not abide by those ideals? If the whole premise of becoming “American” is predicated upon some parchment and a flag, why do we not revoke the citizenship of those who – for example – advocate for hate-speech laws, censorship, and/or gun control? What of those who do not value hard work and industriousness? There is no recourse for the host population to rid itself of newcomers who show an abject disregard for our supposedly sacred American ideals.  If the only thing that binds a nation together are its civic ideals, then those who reject them should be removed from the nation — otherwise, civic nationalism has no way to sustain or protect itself. Indeed, that total lack of any kind of immune system might be civic nationalism’s ultimate folly.

Civic nationalism does not work in practice; worse, it does not work even in theory. It is a notion that fails both a priori and a posteriori. A nation cannot be based upon ideals, economic growth, humanitarianism, or any other contrived value. It can only be based upon a common people, with a common heritage, common values, and a common culture. And it can only continue to exist if all of those things are protected and revered in perpetuity.

In a headline-making speech, Dutch Foreign Minister Stef Blok recently proclaimed that peaceful multicultural societies do not exist. His comments were met with harsh criticism and opposition, and Singapore was offered as a counter-example to his claim. The late Anthony Bourdain once mentioned the “Singaporean model” as the solution to discrimination and Right-wing views. He said this in a conversation about migrants in Cologne who had gone on a New Year’s Eve mass spree of sexual assault. The “solution” Bourdain came up with was the extinction of the white race, a world where everyone is “cappuccino colored”:

It’s our only hope is to fuck our way out of this. It’s going to take some time, but it’s really the only way the sort of Singaporean model where everybody is so mixed up that you really don’t know who to hate because everybody is so hopelessly intertwined. But we’re a long way from that.

Curious, I decided to look and see just how diverse and intertwined Singapore actually is. Singapore is a small island with a population of 5.61 million – in other words, a smaller population than either New York City, London, or Paris alone. And as for the vast and rich “diversity” of Singapore? 76% of the population is Chinese, 15% are Malay, and 7% are Indian (all Asians, and thus coming from similar ethnic and cultural backgrounds, one notes). Singapore is less diverse than the United States, London, Paris, Chicago, New York, Los Angeles, and dozens of other Western cities that rival the size of Singapore itself. In fact, Singapore is a de facto Chinese colony, with two smaller ethnicities living among what is essentially a second Hong Kong. In other words, the nation that is frequently lauded as a pristine example of multiculturalism is in reality made up of a Chinese supermajority.

Far from being an example of a peaceful multicultural society, Singapore is nothing less than a glaring example of the fact that societies function far better not while being “hopelessly intertwined,” but when the vast majority of people share common ancestry, values, and culture.

« There Will Be Civil War