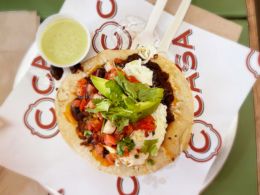 A breakfast taco: the new n-word?

Mexicans are an undeniably proud people, whether they have reason to be proud or not.

I’ve written a lot about Texas lately, but only because Hispanics are goin’ bonkers down there killing other Hispanics in school shootings and migrant-smuggling disasters. In those two incidents alone, the first of which occurred about 85 miles from San Antonio and the other of which happened on San Antonio’s outskirts, Hispanics killed 74 Hispanics.

One would think that 74 dead Hispanics would be more concerning to the National Association of Hispanic Journalists than the fact that First Lady Jill Biden, in an overarchingly clumsy attempt to flatter San Antonio’s Hispanics, compared America’s Hispanics to tacos.

Ms. Biden had been flown into San Antonio — a town which is nearly two-thirds Hispanic and less than a quarter white — to grovel before the assembled Hispanics at the UnidosUS Annual Conference. Formerly known as the National Council of La Raza, the organization is allegedly America’s “largest” Hispanic advocacy group, although I don’t know whether they measure size in terms of membership, revenue, or aggregate height.

The non-profit organization was founded in 1968 with money from the Ford Foundation and initially focused its “outreach” efforts specifically toward Mexican Americans with the intent of squeezing as many of them as possible within US borders and keeping them from deportation once they’ve been squeezed in here. By 1980, the group had expanded to embrace all Spanish-speaking peoples in the United States and was receiving almost all of its funding from the federal government — i.e., indigenous gringo taxpayers. In 2017 it changed its name to UnidosUS, possibly due to the fact that there was no honest way of denying that “La Raza” meant “the race,” and some considered it to be an optical blunder to pretend you’re fighting “racism” while calling yourself “the race.”

The event where Biden was speaking was called “Siempre Adelante: Our Quest for Equity,” and she focused her speech on the work of Raul Yzaguirre, President of UnidosUS, former US Ambassador to the Dominican Republic, and, just last week, the recipient of the Presidential Medal of Freedom, which is the highest award possible for an American civilian. Yzaguirre is also a lifelong member of the Council of Foreign Relations, just like anyone who makes it their mission to fight on behalf of the poor and underprivileged.

Not bad for a fella who for about 50 years had been a pivotal player in an organization called the National Council for the Race.

While giving a tongue bath to Yzaguirre and the very notion of the noble Hispanic race, Ms. Biden’s blunder was to compare them all to tacos:

Raul helped build this organization with the understanding that the diversity of this community, as distinct as the bodegas of the Bronx, as beautiful as the blossoms of Miami, and as unique as the breakfast tacos here in San Antonio, is your strength.

Crammed firmly in there among all the awkward similes like rice rolled tightly into a burrito was the provably fraudulent notion that “diversity is our strength.”

Biden mispronounced “bodega” as “BOW-guh-dah,” recalling the time she told a largely Hispanic crowd “Si se puede!” (roughly, “Yes, we can!”), but instead pronounced it something along the lines of “See say pwodway!”

But the First Lady’s most incendiary comment proved to be the one about “breakfast tacos.” I’m familiar with breakfast burritos. It’s like a regular burrito, but with scrambled eggs rather than dog meat, right? But I’ve never heard of “breakfast tacos” until now. What in the name of Pancho Villa’s smelly corpse is a “breakfast taco”?

This passage suggests that it’s really no different from a breakfast burrito:

People in South Texas call them breakfast tacos, meanwhile, in the Panhandle of Texas and in California they are referred to as “breakfast burritos.” To some, it is considered an insult to call a breakfast taco a burrito because you don’t roll up your breakfast taco (you could, but why would you?), you fold your taco.

Biden’s comparison of Hispanics to tacos earned her a swift condemnation from the National Association of Hispanic Journalists:

Using breakfast tacos to try to demonstrate the uniqueness of Latinos in San Antonio demonstrates a lack of cultural knowledge and sensitivity to the diversity of Latinos in the region. NAHJ encourages Dr. Biden and her speech writing team to (take) the time in the future to better understand the complexities of our people and communities. . . . We are not tacos. Our heritage as Latinos is shaped by various diasporas, cultures & food traditions. Do not reduce us to stereotypes.

Come again, Speedy Gonzales? One of life’s greatest pastimes is reducing people to stereotypes, and I’ll be damned if I let some five-foot-tall Mesoamerican ingrate deny me that pleasure.

I will grant whoever wrote that “We are not tacos” passage the benefit of the doubt and assume that English is not their first language. Jill Biden did not call you tacos. She compared your alleged “diversity” to that of breakfast tacos. It was a simile, not a metaphor. And as far as I can tell, there isn’t much diversity among “breakfast tacos,” but there doesn’t seem to be much diversity when I search for pictures of “Mexicans,” either.

Perhaps Biden’s most grievous mistake, at least in factual matters, was to imply that either breakfast tacos or the Hispanic community was diverse.

I insist on using the term “Hispanic” to describe them. I will never call them “Latinos,” as it’s an affront to the great Roman Empire and anyone who’s ever sat through a Latin Mass. There is nothing “Latin” about Hispanics. In a quite literal sense, the mouth-breathing Dagos of Jersey Shore are more “Latino” than any Mexican boxer is.

They are rightly called “Hispanics” because they speak the language of their Spanish conquerors, and the Spanish had a tendency only to conquer short, brown peoples, whether in the Americas or way out yonder in the Philippines.

In purely racial terms, Hispanics are white only to the degree to which Spanish blood courses through their veins. But the truest “diversity” among American Hispanics, at least in cultural terms, may be the degree to which they identify as white. As of 2010, about half of all Americans born in Mexico identified as white. On the high end of the “white Hispanic” spectrum, 85% of Cuban Americans identified as white. On the low end, only 30% of Dominican Americans considered themselves white.

One thing is for certain: They are definitely not so white that American politicians refuse to pander to them as a distinct racial constituency. It’s known as “Hispandering,” and nearly all politicians do it. Hillary Clinton infamously bragged about how she carries hot sauce wherever she goes, called herself “La Hillary,” and ran campaign ads about how she’s like your Spanish granny. In 1988, Vice President George H. W. Bush referred to his three Hispanic grandchildren as “the little brown ones.” But despite the fact that he never got a wall built, Donald Trump was absolutely hilarious about Mexicans — not only when he called them rapists, but when he tweeted a picture of himself on Cinco de Mayo with a Trump Tower “taco bowl” and the phrase “I love Hispanics!”

Many Hispanics took offense at Trump’s in-your-face attempt at pandering. Imagine being so entitled that you enjoy the privilege of getting offended even when someone tries to compliment you.

Chastened, humbled, and terrified by La Raza’s condemnation, Biden issued an apology through a spokesman on Tuesday: “The first lady apologizes that her words conveyed anything but pure admiration and love for the Latino community.”

So get this straight: The coolest thing Jill Biden ever did apart from eschewing bras in her youth was to upset Mexicans by comparing them to tacos, and here she goes and starts groveling.

It’s been a running joke for about 30 years that when asked to explain anything positive about diversity, the only thing that even its most ardent academic proponents can come up with is, “Well, we get a wider selection of ethnic restaurants in our high-priced, upscale, mostly white urban enclaves.”

Even though no one was literally referring to Mexicans as tacos, I can think of a lot worse things people could call them. “Mexcrement,” for one. Also, “car thieves,” “chili-shitters,” “garden gnomes,” and “Latrinos.” Tacos might be one of the few positive things that normal Americans associate with Mexicans. Why spoil a good thing?

Would they rather be known for rape, drug cartels, corruption, and being short?

I’m from Philly and would be downright flattered if you called me a cheese steak or a hoagie.

Where I grew up, we freckle-faced Celts referred to Italians as “meatballs,” and I don’t ever recall anyone taking offense. Everyone in my neighborhood, Irish and Italian alike, enjoyed spaghetti and meatballs.

Why en el mundo should they be offended at being compared to tacos when it’s a documented fact — and I’m the one who documented it — that the only thing Mexicans have ever invented was the nacho? Maybe they should be even more offended at the fact that no one has ever stereotyped them as geniuses.