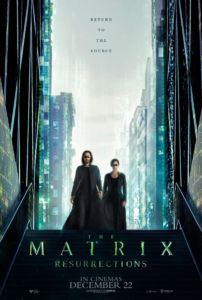 Larry and Andy Wachowski’s The Matrix (1999) is a science fiction classic. The setting is a devastated Earth in the far future. The premise is that humanity has been enslaved by artificial intelligences. Human beings spend our lives in what are essentially coffins while mechanical vampires drain our energy. We don’t know it, because we are asleep, dreaming that we are in a radically different world. This is the Matrix. Today we would call it a multiplayer online game.

Like many dystopias, The Matrix is actually too optimistic. The Wachowski brothers thought the human race would have to be forced into the pods. They didn’t imagine we would choose them. But eventually, gaming addicts will build coffins for themselves as in The Matrix, where they can loll about catheterized, diapered, and fed intravenously, so the game never ends. To sustain themselves, they’d gladly share their body heat.

The image of the human race both enslaved and deluded about its condition by a fake world of mere projections goes back to Plato’s Allegory of the Cave in the Republic. It is echoed in Descartes’ Meditations and the Marxist concept of ideology.

Plato, Descartes, and Marx all believed that emancipation is possible, but there’s no way to think yourself out of the Matrix. If you managed to wake yourself up, you’d discover that you are a naked, flabby blob in a pod full of pink goo, hooked into a machine that both nourishes and drains you.

Plato posited a sunlit world outside the cave where one could live and plan to return and liberate one’s fellows. Outside the Matrix, however, the Earth is devastated and shrouded in darkness. You wouldn’t have a chance.

Thus it isn’t clear how the resistance movement of the Matrix started or how it can end. To begin, the resistance needs a deus not from the machine, but outside of it altogether: perhaps a seed of unenslaved humanity living in a place called “Zion” near the Earth’s core.

Getting people to join the resistance is a hard sell. You can persuade people to quit a job or a relationship by arguing that “it isn’t really you.” But imagine telling people that everything about their world, including the people they love, including their very selves, is fake. The real world is a hellscape where they are living corpses, imprisoned in coffins, fed upon by parasites. Which world would you choose?

However, the ultimate goal of the resistance is to crash the Matrix for everyone, whether they like it or not. But it is not clear how the human race could survive such an event. There’s Zion, but that promised land probably isn’t big enough for everyone.

The Matrix works as the story of the hacker Neo (Keanu Reeves) awakening to reality and joining the resistance. But as far as the larger project of liberating humanity goes, the creators of The Matrix had written themselves into a corner, and they should have quit while they were ahead. The story could not stand up to too much scrutiny about where the resistance came from and where it was going.

The first sequel, The Matrix Reloaded, was a clever movie with a bleak message: The resistance itself is an illusion, created by and subordinate to the Matrix. Of course that’s a useful lesson in a world of coopted and manufactured oppositions. The problem is that on the basic premises of the films, there can’t really be a true opposition — which means that no matter what happens, the machines will always be in control.

The second sequel, The Matrix Revolutions, was pretentious, incoherent garbage in which Neo and the heroine Trinity (Carrie Anne Moss) both die. It sounds like a bleak ending, but look on the bright side: If the hero and heroine are dead, at least there won’t be another sequel, right?

For, as this new movie has the brass to explain, Warner Brothers needed more money, and money has the magic power to resurrect dead franchises over and over again. Hence The Matrix Resurrections. What could possibly go wrong? Look how well it worked for Star Wars!

The Matrix is objectively more useful to the pro-white Right than the anti-white Left, but you have to look past the casting to see that. In The Matrix, the bad guys are all clean-cut white men. The good guys look like the Left: a coalition of non-whites and white misfits. But just bracket that out for a minute. Imagine the movie with a monoracial cast and you’ll see that the story itself is not anti-white. Only the casting gives that impression.

In today’s world, what is the closest thing to the Matrix? The mass media, including gaming. In today’s world, who are the parasites who control the Matrix? They are overwhelmingly Leftist and disproportionately Jewish. (The Wachowskis are not Jewish, but Anglo and Polish in descent.) In today’s world, the race-conscious Right are the advocates of realism — racial, sexual, and political — whereas the Left are advocates of social constructionism, utopianism, gender fluidity, and delusional happy talk. (Both Wachowski brothers have “changed their sex.” Larry is now known as Lana, and Andy now styles himself Lilly.) 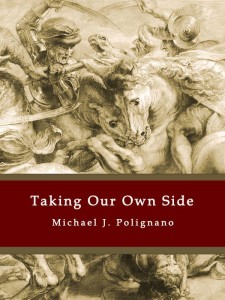 You can buy Michael Polignano’s Taking Our Own Side here.

In today’s world, who are the slaves of the Matrix? The answer is tricky, because almost everyone is deceived and exploited to one extent or another. But whites, especially straight white men, are at the bottom of the progressive stack. Whites are targeted with relentless hate propaganda, including the casting of The Matrix itself. Thus it was natural for race-conscious whites to see The Matrix as an allegory for our situation and to appropriate the “red pill” as a symbol of our awakening. To my knowledge, the first use of the red pill in this manner was in Michael Polignano’s speech “My Awakening Too” from May 2004.

One of the ambitions of The Matrix Resurrections was to somehow “take back the red pill” from the Right. The movie accomplishes nothing of the kind, so I suspect that this was just another cynical attempt to promote a movie by getting race-conscious whites to hate it online. (See my article on the No Time to Die trailers.)

The Matrix Resurrections is directed by “Lana” Wachowski, but after a few minutes, I thought this was the work of Jar Jar Abrams, since it follows the pattern of his cursed Star Wars movies. Because the Mouse needed money, Abrams was tasked with resurrecting Star Wars. Since the purpose was money, and since he held the fans in utter contempt, there was no question of creating an original story within the larger Star Wars mythos (what the money people call a “franchise”). So Jar Jar decided to simply coast on nostalgia. He dusted off the original cast members (who were long past their discard dates) and put them in scene-by-scene, sometime shot-by-shot rip-offs of the original trilogy, this time as farce. Since he had no idea what made the original trilogy popular, he took the 70-IQ cargo cultist route of imitation, thinking that would be safer. He also junked the plots up with so many inanities and gags and leaps of logic that he delivered running times of 138 and 142 minutes, which simply highlighted the vapidity of the stories. Not only did he insult the intelligence, taste, and values of the fans, he bored them silly.

“Lana” follows the Abrams playbook to the letter. The Matrix Resurrections is garbage: pretentious, incoherent, boring, and deeply insulting to its audience. But “Lana” goes Abrams one better: He breaks the fourth wall; he goes “meta”; he thinks that brazenly flaunting the greed and cynicism of the whole enterprise will somehow redeem it. But it doesn’t. Self-conscious, ironic garbage is still garbage.

I like to think that the Wachowskis were sincere when they made The Matrix. It probably never occurred to them that they were far closer to the machines than the plucky resistance fighters. Judging from The Matrix Resurrections, however, “Lana” no longer has any illusions. He’s quite comfortable with his role as deceiver and parasite. If you are a fan of The Matrix and still think that objective reality matters—if you’d like to be liberated from illusion—if you are not comfortable with being a pod-dwelling, bamboozled milch-cow for soulless parasites at  Warner Brothers, I have a red pill for you