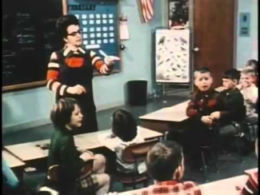 Jane Elliott in her classroom.

Stephen G. Bloom is a Jewish Professor at the University of Iowa. He rose to prominence after he wrote a book about an Orthodox Jewish sect that created problems in Postville, Iowa. His outsider’s perspective on Iowa was published in The Atlantic, just before the 2012 Iowa Caucus.

Iowans responded defensively to the article in The Atlantic, but Bloom’s critique was not entirely without merit. Although heavily agricultural, Iowa is part of the Rust Belt, and the latter’s problems afflict Iowa as well. Many Iowan jobs have been outsourced or downgraded due to globalization. Much of the population is underemployed. The state also has a big problem with substance abuse. And although Iowa is a big food producer, large portions of the state are food deserts. This is because yellow dent corn is their main crop, and it’s essentially inedible. It’s only used for other purposes: ethanol, animal feed, corn syrup, and so on.

Iowa is racially Nordic and has a uniquely Nordic cultural flavor. The first Anglo settlers were mostly Virginians, but most of the state’s culture is an admixture of Yankee Vermont and Quaker Pennsylvania. These Old Americans have intermarried with other European immigrant groups, mostly Scandinavians, Irish, and Germans. Many of Iowa’s Germans and Danes came from the region of Schleswig-Holstein.

Iowa’s most important export is Nordic Iowan young adults, and the impact of this Mid-Western Völkerwanderung upon American culture has been enormous. Many of the old-stock Americans who pioneered the state of North Dakota came from Iowa. Southern California is also basically an Iowan colony. Southern California cultural icons such as John Wayne, Johnny Carson, and Wyatt Earp were either born in Iowa or grew up there.

Iowa’s unique position in the presidential primary system is therefore not entirely unwarranted. The Iowa diaspora is deep and wide. It is South Carolina, with its massive population of sub-Saharans, that warps the primary system.

One of Iowa’s cultural outputs is Jane Elliott. She is a schoolmarm from Riceville, the daughter of Lloyd Jennison and Margaret “Gie” Benson. Elliott’s claim to fame is that, beginning in 1968, she conducted experiments (or “exercise,” as she put it) where her third-grade pupils were divided by eye color. Those with blue, green, or hazel eyes were marginalized and those with brown eyes were praised. The purpose of the experiment was to teach the children about prejudice and racism.

According to Elliott, she came up with the experiment the day after the Angelic African, the Reverend Doctor Martin Luther King Jr., was shot in 1968. When Riceville’s newspaper editor, Smitty Messersmith, got word of it, he published an article about it. This caused Johnny Carson, host of The Tonight Show, to invite Elliott to his show.

The recording of the segment has been lost. As one can imagine, Elliott was not particularly funny, and Carson quickly went to commercial. Regardless, the segment catapulted Elliott to fame. Soon there were news crews crawling around Riceville, hyping the situation. Elliott became the first teacher of the anti-white corporate diversity training sessions that all American professionals are now being forced to endure.

Bloom carefully catalogues Elliott’s career in his book. He found that most of the people in Riceville didn’t particularly like her. Some said she had been an innovative teacher at one time, however. Bloom also discovered that Elliott was cruel. She even left a nasty message on his answering machine after she discovered he was not going to write a “Disney” story about her.

Elliott was not the first provocative teacher in Riceville. Bloom describes another Riceville teacher, Paul J. Richer (Jewish), who had done many of the same things that Elliott did a decade earlier:

Both Richer and Elliott were education reformers and renegades. Both craved the spotlight and were keenly adept at using the media to their advantage. Richer occasionally talked about himself in the third person, a practice Elliott would also employ. Other similarities between the two were their unorthodox teaching methods that roiled locals.[1]

Richer was far Left politically. He was hostile to Senator Joseph McCarthy, who was then a prominent anti-Communist fighter. He also attempted to produce a play at his school called Blackboard Jungle in which an American flag’s pole was used as a weapon by one of the characters against another. This caused a confrontation with the local American Legion Post, and the students eventually chose to abandon the play rather than remove the scene. Richer’s sympathy for Communism likewise caused a Congregationalist minister named William Bohi to organize against him, and he was fired.

Elliott turned out to be more difficult to fire, even though her experiment was terribly cruel to her third-graders. Richer was an out-of-towner, but Elliott was descended from the town’s founders. Elliott had also already established herself as a solid teacher in the years prior to her experiment, so finding a cause for firing her was difficult.

Bloom shows that the experiment was not Elliott’s invention. Such experiments were conducted as early as the period of the First World War, and educational journals published articles on such experiments in the early 1960s. Bloom also shows that many of Elliott’s pupils were psychologically damaged as a result of it, and her claim that a prominent child psychologist supported it is a bald-faced lie.

Elliott appeared on the Oprah Winfrey Show twice. On both occasions, she dominated the audience as well as Oprah. It is very likely that she offended Oprah when she complained about Oprah’s white staff and studio crew. By then she had become a well-paid consultant, although always lived modestly, and she continued to conduct her experiment on corporate employees and other groups.

Elliott has also echoed anti-German propaganda from the Second World War, such as the idea that brown-eyed Poles were used for bizarre medical experiments. Many of her beliefs are inspired by Leon Uris, a Jewish writer who specializes in using preposterous Nazi atrocities in his plotlines. She likewise endorsed the nutty wing of the Democratic Party: the militant homosexuals, Africans, migrants, mattoids, and so on. She’s still living today at age 87.

Bloom’s final assessment of Elliott’s career is that she didn’t help race relations.

How was Jane Elliott Able to Do This?

How exactly did Jane Elliott get away with an experiment that is both cruel and ineffective? Elliott argues that she was able to do it because, as a white woman, she is basically untouchable. I agree with this. I’ll add that because of her Iowa roots, she is easily understood across America. News anchors often seek to adopt the Iowa accent, for example.

Elliott also has natural talent. Again and again, it is clear that Elliott is able to dominate a room and capture the conversation. She sharpened that talent in every class. Elliott is also not a mattoid or a spiteful mutant; she is normal-minded, but possesses a cruel streak. One can see this cruelty in photographs of her.

Elliott’s act is also not valuable in an ordinary economic sense. The time and money wasted by government organizations and businesses on her ideas is considerable. Because of the 1964 Civil Rights Act, however, every money-making enterprise runs the risk of becoming the target of some sort of “civil rights” lawsuit. Companies that hire Elliott to berate their white employees for their racism gain a shield against such lawsuits. It is also notable that Elliott’s cruel experiment took off as a cultural force soon after the “civil rights” movement had made its greatest gains.

What was Jane Elliott Doing Wrong?

Bloom doesn’t speculate much on what is so unsettling about Jane Elliott and her experiment on children. But for me, the experiment is based on false premises. Sub-Saharans aren’t actually “discriminated” against because of the color of their eyes or skin. The racial drama in the United States is the result of sub-Saharan criminality, low IQ, and their other pathologies.

Elliott is not an expert on race relations. She grew up in a white area. She likely had little contact with Africans prior to her rise to fame. And yet she became a priestess of Negro Worship: a Christian heresy which is the wormwood in the Yankee culture of which Iowa culture is a sub-set.

Without a doubt, Jane Elliott is highly talented — it’s unfortunate that her legacy is that of an effective collaborator with the “civil rights” occupation government that has enslaved America.