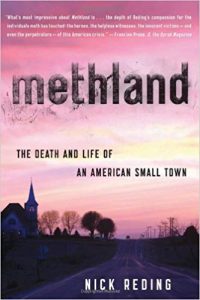 Methamphetamine is the drug for people in hardworking cultures. It was first synthesized in Japan in 1893. It was used by the German and American armies during the Second World War. Initially, meth was considered a miracle drug. It was a pick-me-up that also treated depression, obesity, and erectile dysfunction. Meth also helped a person work hard without breaks, food, or water.

Meth was considered a miracle drug.

As with all miracle drugs, there is a price. To put it simply, meth (also called crystal, crank, ice, or speed) wrecks the user’s health and puts the user out of his mind. Addicts leave behind a trail of destruction; while on meth, they commit different crimes and might sexually abuse their own children as meth makes the libido uncontrolled. Meth use in the gay community is also correlated with increased infections of AIDS and Hepatitis C.

The impact of meth on a small town in Iowa is documented by Nick Reding in his book Methland: The Death and Life of an American Small Town. Although he mentions in the book a number of small towns in the Midwest, Reding focuses on Oelwein, Iowa, a town situated approximately 260 miles west-northwest of Chicago. 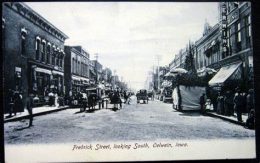 Oelwein, Iowa in days gone by.

Although Methland was published in 2009 and its research was done during the dreadful “Peak Bush” years of 2006, the socioeconomic conditions remain in place for the dystopia described by Reding. The white working class remains in economic and moral peril. For every addict, there are damaged children and families, and fewer of our own people able to advance the collective interests of our race. Those who spend their time high fail to advance their career and generate prosperity. Drug use is an agent of white dispossession.

Initially, meth use wasn’t much of an epidemic. However, the social revolutions of the 1960s provided an opening, or perhaps created a larger opening, for a culture of widespread drug abuse. (One might speculate that whites took to drugs after their elite was displaced by a Jewish elite at that time.) Meth was outlawed in 1970.

The meth situation was extant, although manageable, in Iowa until the Farm Crisis of the 1980s. In the wreckage-strewn wake of the Crisis, matters were made even worse by the neoliberal trade policies of the Bush Senior and Clinton administrations which further damaged the economy of Iowa. Wages fell when Oelwein’s meatpacking plant was sold to a globalist firm. Small farms disappeared into the property of companies like Archer Daniels Midland, or absorbed into the farms of locals that made it through the 1980s. When the meatpacking plant finally closed for good, Oelwein’s economy collapsed, with social disorder following. Streetlights weren’t lit at night, there were fewer police, the jail was not funded, and abandoned houses were prime targets to become meth labs. Idle hands became the devil’s playthings.

This economic desperation occurred when many Iowans and other Midwesterners had settled in Southern California. Los Angeles, writes Reding, was America’s ground zero for meth. Local Mexicans had figured out how to manufacture the drug, and LA’s Iowan population became involved in smuggling meth for users back home. By the mid-1990s, it was widely known how to cook meth and illicit labs popped up across the inland United States. At the same time, the illegal Mexicans who poured into the United States following the North American Free Trade Agreement and the deliberate collapse of border enforcement provided a massive network of transporters and dealers. Non-white immigrants were clearly a major factor in the spread of the drug.

In 2006, the mayor of Oelwein rolled the dice and turned things around. His first act was to replace the chief of police with a long-serving sergeant. This move turned out to be a bold masterstroke of hiring to match political goals. Oelwein’s police department had been slack and corrupt. The police sergeant’s backstory also matches what I’ve found about organizations with dishonest leadership; there are often fast and loose accusations by the most corrupt person leveled at those more honest or effective. The sergeant had been accused by the chief of being a peeping tom, among other perversions, all while the police chief was turning a blind eye to the meth crisis. The sergeant had to skip over the chain of command to talk directly to the mayor in a private office call and plead his case.

After enacting tougher law enforcement, the mayor convinced the town to vote a tax upon themselves to turn abandoned space into a new industrial park and revamp the sewer system. The risk paid off, the industrial park ended up being used by a community college. Meanwhile, abandoned houses were condemned so as to remove potential spots for a meth lab.

Things to think about

Books like Methland are important for white advocates to read and understand because there are a great many towns like Oelwein, Iowa out there. These towns are part of the broodlands of our people. Indeed, Madison Grant wrote:

Iowa, being predominantly agricultural, has felt particularly the unfavorable status of agriculture since the World War. During the decade 1920-30, three of every five of the villages in the State actually lost in population, the people having either moved into the cities or “gone West.” Here as elsewhere, the small village seems unable to meet the needs of the inhabitants. One of the real problems of statesmanship in the near future is to work out a social and economic system under which a larger part of the old native stock, and particularly the most intelligent portion of it, can live under the favorable biological conditions of the small village. [1]

Drug use and addiction must be faced head on. Carry A. Nation was not entirely wrong in denouncing alcohol, and Nancy Reagan was absolutely right to push kids to “just say no.” In some cases, it is okay to have a pint or smoke a joint — but these actions can easily spin out of moderated control. I encourage all white advocates to take a look at their use of intoxicating substances and see if they need to change their behavior.

When meth was a legal drug, it was not as potent as the current, illegal form commonly used today. This situation is part of a trend; consumer choice is making all intoxicating substances more powerful. In Appalachia, where opium is the king drug, a dealer who had a client overdose gets more customers as he is presumed to be peddling more potent stuff. The amount of THC present in marijuana was 2 percent on average in 1970. It is 25 percent today. Wine has gone from 9 percent alcohol to 12 percent, and it is still sold in large quantities. Wine glasses in restaurants are larger than before. 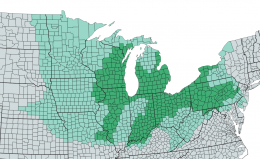 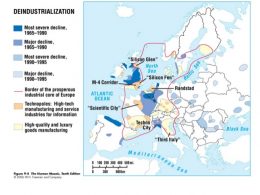 Europe, especially England, has a Rust Belt too. [3]

It is clear that trade policy is a major factor in economic prosperity. Under the protectionist philosophy enacted in the Nineteenth Century, towns like Oelwein prospered. In a neo-liberal environment, these towns languish. It is absolutely critical for white advocates to do everything possible to reverse the deindustrialization of their societies, whether it is in the Midwest of the United States or the Midlands of England. A deindustrialized society will become a plaything for the Empires of the Orientals.