The Optics War is Over, & Both Sides Lost 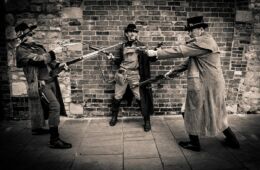 I never took a side in the Optics War. I only wondered why anyone thought it needed to be fought.

I realize I’m going against the general sentiment of nearly every other writer on this site and most of the readers by stating this, but I feel the entire Optics War was ill-advised, divisive, and destructive. And neither side came out in better shape as a result.

Please at least try to hear me out, as annoying as it may be. Try to bite your lip just a little bit while I vent my spleen.

I’ve been around this particular political mulberry bush enough times that I don’t give much attention to the hot new “dissident” trends, because I’m aware of how quickly every last one of them crashes and burns. So the only opinions I publicly expressed while this war was raging were that in a modern technocratic dystopia, traditionalism is bound to lose and religion is a distraction from politics. Traditions emerge in specific cultural and technological environments and become obsolete once the demographics and technology change. Regarding religion, when the war is on the ground, it’s foolish to keep your head in the clouds.

But that’s as far as I went. Otherwise, I found it depressing to see this fraternal war that took everyone’s attention away from the rapidly encroaching barbarians.

By the way, I don’t think it qualifies as a “war” when it’s “fought” entirely online and not in the streets, but that’s a matter for another article.

More on point: Who exactly managed this “war” that was only successful in that it took everyone’s attention away from focusing on the common enemy? I suspect it was someone with a lot of power—either in the government, the private sector, or some collusion between the two.

As far as who pulled the strings behind the curtains of this entirely unnecessary and wholly divisive war, I strongly suspect it was someone who was hostile toward both sides. Maybe it involved agents in the FBI and the CIA. Perchance it involved wealthy Republican operatives who didn’t like the taint of bad PR from what used to be known as the Alt Right. Maybe it involved all of the aforementioned.

But I highly doubt it was some organic uprising of the sensible and righteous hall monitors of the “Dissident Right.” Instead, I strongly sense it was planned and executed by those who hated both the good-optics crowd and the white-trash “wignats” and manipulated them into blaming one another. I feel it was orchestrated by those who both benefited from and enjoyed seeing these two tiny groups of “extremists” at one another’s throats.

But even though I didn’t take a side, when it comes to which side I found much more annoying, it was the “good optics” people. It wasn’t even close. Most of them came off like a bunch of pampered, snarky brats. Whether or not they were encouraged to do so by murky, unnamed forces, the good-optics crowd seemed to have instigated the infighting and done almost all of the attacking, and seemed to rejoice whenever one of their designated foes was destroyed or jailed. It was sickening to behold.

I sense that most of the “wignats” were taken unawares and mostly wondered what the fuck was going on. After all, they were being attacked by people who were openly Sieg-Heiling and focusing 100% on white identity only months prior.

It mostly seemed like a one-way war. Most of the accused “wignats” seemed to be thinking, “What the hell is this all about, and why has it happened all of a sudden? We were best friends only a year ago!” I feel the entire “anti-wignat purge” was ill-advised. If things get hairy, you’re going to need those people. Many of them may be dumb, but I sense a lot of them are more willing to shed blood—that of others and their own—than many of the trust-fund, frat-bro “optics” crowd who look down on the wignats with the identical disdain that Leftist snobs fling at them.

I find it difficult not to see the “Optics War” as an intraracial class war among whites, with all the snooty and protected rich boys making fun of “trailer trash wignats.” If the shit really goes down—and I don’t know anyone who thinks it won’t—you’re all going to need one another. Think about that for a second. Rather, think about it for at least one day.

One thing the modern Left doesn’t tend to do is disavow anyone who seems to be on their side politically, no matter how nutty or violent they are. Perhaps something can be learned from that. Black academics don’t attack crackhead gangstas, but we have the “America First” crowd—and it’s not a new idea, folks, but maybe you’re too young and uninformed to realize that—going after the meth-smoking lower-class white “wignats” with the same gleeful fury that Antifa does. The snobbier—and, in many ways, softer—elements of the “Dissident Right” have consistently displayed as much open disdain for the trailer-dwelling “wignats” as the Left does, if not more. So thanks for volunteering to do the Left’s dirty work for them, fellas.

I may be getting my chronology wrong here, but it seems as if the Optics War ignited shortly after Charlottesville. Of course, “Unite the Right” was the most ironically-named event in political history. Rather than achieving its stated goal, it pulverized the Right into subatomic particles. But when factions of the very same people who’d sympathetically attended Charlottesville began blaming other factions of those who’d sympathetically attended, I was baffled. I remain mystified that people could blame anyone but the press, Antifa, and the police for what happened that day.

After Charlottesville, things quickly devolved into a pissing contest centered on the narcissism of small differences. Who gives a fuck if some fool is stomping around in a Stahlhelm if he agrees with you on 99% of the things that matter?

Suddenly, everyone began accusing everyone else of being federal agents. Yes, I’m aware that there are feds infiltrating everything. I’m a guy whose writing was quoted by someone who shot at the White House back in 1994, so chances are good I’ve been on government watchlists since before many of you were born. But my instincts tell me that the first sign someone is a fed is that they’re always accusing others of being feds. Just drop it, guys. It creates an insane climate of paranoia and mistrust. Most importantly, it does the enemy’s work for them. They don’t even have to get their hands dirty.

The good-optics crowd assured us that if we followed them into the sunset, the normies would be converted and young men wouldn’t have their lives destroyed like they did when they were held captive under the Alt Right’s sinister thrall.

How’d all that work out fer ya?

There are some crucial differences between January 6, 2021 and Charlottesville. In Charlottesville, it was a Leftist—a presumed enemy, right?—who died. On January 6, a white female Trump supporter was shot in the neck and died at the hands of a cop who still hasn’t been identified.

As far as the aftermath goes, January 6 was incalculably worse than Charlottesville. Now the same people who seemed to think “good optics” would prevent them from social ostracism and even jail are learning the hard way that it didn’t. A lot of the “good optics” people were directly involved in the January 6 fiasco, which will prove to be a billion times more disastrous for “the cause” than anything that happened in Charlottesville.

Just like the “wignats” were a few years ago, now the “good optics” folks are being deplatformed, locked up, put on no-fly lists, designated as terrorists, and kicked out of the armed forces. Doesn’t that suggest that the whole “war” was not what it seemed to be?

Right across the board, both the good-optics and bad-optics people have been jailed, deplatformed, depersoned, and even exiled.

And now both sides are destroyed. Was it worth it, guys?

When the “Good Optics” people are now being deplatformed and put on no-fly lists and declared to be terrorists and described as Nazi white supremacists no matter how hard they strain to disavow such labels, can you explain to me what the entire purpose of that Hatfields vs. McCoy feud was? To the enemy, both the Hatfields and McCoys were dirty, contemptible hillbillies—no difference between any of them.

I’m sure most of you realize how difficult it’s been to visit this site over the past few months because of the endless DDoS attacks by those who view all of us as bad optics.

If sites such as this one are getting more traffic, I believe it’s not because they adhere to the good-optics credo or our wonderfully persuasive propaganda, but because of the Left’s absurdly bad behavior. Very few of us – and I’m including myself here – have had nearly as much of an impact as the Left’s behavior has. If the “normies” are coming “our” way, I think it has very little to do with “us” and everything to do with the establishment Left’s blindly arrogant drive for power.

I don’t have a clue about how to build a sustainable coalition, but I believe I have a good sense for what’s unnecessarily divisive. Just as the “boomer” meme got generations who would ordinarily be in agreement about most things blaming one another, the Optics War only served to divide people who agree about almost everything, or at least the things that count.

I’m not a “movement” guy. I’ve never even claimed to be “Right-wing,” but circumstances find me and the readers and writers of this site agreeing on a l0t of things. Not agreeing about all of them—that would be stupid and fanatical—but enough to prove we share similar concerns about the state of the world.

Trying to appeal to “normies” will fail. Circumstances will drive “normies” this way. Until then, quit the petty bickering, you schoolgirls. Drop your electronic swords. We have bigger fish to fry.