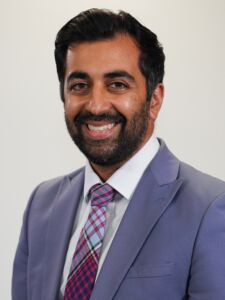 James Boswell once asked Dr. Johnson, the man whose biography he famously wrote, what was the best thing to come out of Scotland, that country being Boswell’s homeland. Johnson replied, “The noblest thing a Scotchman ever sees, is the high road that leads him to England.” If any Scotchmen wish to take that road to the land of the Sassenachs today, and they wish to bring their politics with them, the English should be, to channel Margaret Thatcher, “frit.”

Nicola Sturgeon, Scottish Prime Minister and head of the Scottish National Party (SNP), which leads the devolved Scottish Parliament (SP), has talked of rebuilding Hadrian’s Wall to separate the two nations. But a review of recent activity in the SP suggests that the wall should be built not to keep the English out but to keep the Scots in. Scotland the brave seems to have become Scotland the Bolshevik.

Just as there is a justifiable suspicion that the paramilitary COVID response by governments in the Commonwealth countries of Canada, Australia, and New Zealand may be a practice run for the rest of the West, so too recent Scottish legislation does not bode well for the rest of Great Britain as it could well be a testing ground, an ideological petri dish on which a new culture is being prepared. With the rest of us distracted by events elsewhere, the tiny, cold, and craggy country to the north of England that reluctantly counts Donald Trump as one of its sons has introduced laws and suggested potential ones that would have had some of last century’s great totalitarian dictators applauding.

The first sign of a Great Tartan Terror came with the passing, by a large majority, of the Hate Crime and Public Order (Scotland) Bill last year. Most of this is the usual injunction against everyone who is not a favored minority, forcing them to choose their words carefully when discussing anyone and everyone who is. So, anything deemed to be “inciting hatred” would be prosecutable if announced on social media or in a public place. Oh, and I almost forgot. In your house.

That’s right, my bonny wee lads and lassies. Scottish Justice Minister Humza Yousaf, whose familial origin is clearly not Caledonian and to whom we will definitely be returning, argued against a “dwelling defense” protecting free speech in the home. He said:

Are we comfortable giving a defense to somebody whose behavior is threatening or abusive, which is stirring up hatred against, for example, Muslims? Are we saying this is justified because it is in the home?

Yousaf adds Jews for the sake of PR but, like all of Europe’s hate speech legislation, this is designed primarily to forbid criticism of Islam. The same bill abolished the Blasphemy Act (unused in 170 years) as a distraction, but Yousaf is playing for his team, and that team is Islam rather than Scotland.

Yousaf had a viral moment last year when he gave his own hate-filled speech about his white colleagues. While his accent is authentically Hibernian, he is less than enamoured of his co-workers in the SP. The short video is a must-see to get the full effect of the insulting epithet Yousaf spits out after naming the problem with all the main functionaries in the SP save himself. They are, he says while grimacing, white! As Scotland is 96% white, his point is baffling, and he may be better suited as a justice minister elsewhere. I gather that such a post has recently become available in Afghanistan.

So much for free speech — which will soon be taking place, whispered, in ancient Scottish priest-holes only. But what of more pressing issues, such as transgenderism? In a country where men wear the tartan-pleated skirts known as kilts both to social events and to war, there is bound to be a little gender confusion. With this in mind, the devolved Scottish Parliament has decided to address the problem of children who wish to “transgender,” if this monstrous construction can be used as a verb. And just to make sure that the wee bairns are protected, they have sanctioned allowing children to transgender at four years old. More, to avoid worrying Ma and Da, schools can officiate over the process without informing the parents.

So, if you want to sound off at home about your transgender four-year-old being encouraged to have genital surgery while you are none the wiser, make sure that haggis isn’t wearing a wire. If wee Jock wants to be wee Jill, shut yer gob, ye bampot.

And the Scots may be spending a lot more time at home if Sturgeon’s Stasi get their way. A new piece of legislation recently floated is that current government restrictions, lockdowns, and curfews be extended even in the event of the current pandemic subsiding completely. Surely governments don’t use short-term emergency powers to increase their power over the populace once the emergency is over, do they? We must be told!

Now, of course, one feels sorry for the Scots. The bagpipes are their national instrument, used in folk festivals as well as in battle. Perhaps, had brawny and ginger-haired bravehearts deployed a division of pipers against the Taliban twenty years ago, Kabul would now be fields of heather and bars full of single-malt whisky, with some golf thrown in, for the enemy would understandably have fled in terror. Instead, Scottish towns may soon be twinned with Kabul, as both seem to be going full totalitarian.

You can say that again, Jocko. Scotland is fast becoming an unashamedly authoritarian state, and that may spread — it may well be designed to spread — to the hated English. Scottish sports fans, when their national rugby or soccer side is playing against the country they call the “Auld enemy,” are notorious for singing “Stand up if you hate England” (inexplicably to the tune of “Go West” by Village People), and most all of them stand up. So the question is clear: Do we have McSoviets in our midst? Och aye the noo, as no Scottish person said, ever.

» A Message for Groypers