Requiem for a Jigger 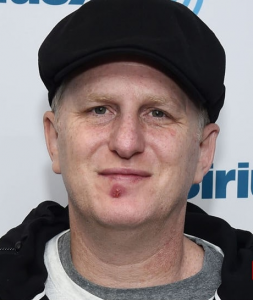 Erstwhile actor, would-be political activist, and aspirant transracial icon Michael Rapaport might be the dumbest Jew who ever lived.

He grew up in a wealthy Ashkenazi family on the hard, hard streets of Manhattan’s Upper East Side, but to hear him speak, you’d think he was auditioning for the movie role of a crack baby born in a South Bronx shopping cart.

Although I doubt anyone on the planet would consider him one of the 1,000 top living actors, Rapaport’s fake-black trash-talking has managed to annoy several actual blacks, among them the world’s two best basketball players — both of whom, unlike Rapaport, are genetically and effortlessly black.

I met the lumpy potato head in the green room when I was a guest on an episode of ABC’s Politically Incorrect back in early 1998, and no one on the show that night — not the smarmy dwarf host Bill Maher, nor the yam-stuffing shrieking cunt Karen Finley, nor the mentally disabled obese mulatto rapper Heavy D — irritated me nearly so much as the walking wiggery herpes rash that was Michael Rapaport. While Finley was in the make-up room getting pounds of cosmetics shoveled onto her bitter mug, I sat silently in the green room watching Rapaport trying to impress Heavy D with his encyclopedic knowledge of hip-hop and his fawning embrace of All Things Black.

Including the host, I faced three Jews and one black person that night, and they all seemed convinced that white people were unfairly advantaged in this society. When the cameras started rolling and I tried gently suggesting to the panel that what so-called “rednecks” — Maher called me a “scary-looking redneck” — share with many black Americans was poverty, Heavy D and the Three Jews began barking that I was suggesting all black people are poor, which is apparently an insult to black people despite the fact that they seem to love complaining about being poor and getting free things as a result.

As someone who avoids all Hollywood movies after 1975, at the time I was unaware that Rapaport had recently starred as a skinhead school shooter in John Singleton’s 1995 anti-white film Higher Learning. To this day, Rapaport insists that he was acting against type, but it sort of clicks when you realize he was merely playing Hollywood’s New Ultimate Villain and was therefore facilitating a narrative.

Michael Rapaport’s estimated net worth is $12 million. Anyone who’s remotely sane and intelligent can take one gander at him or listen to one sentence out of his mouth and realize he does not possess $12 million worth of talent. The fact that no-talents such as him, Seth Rogen, and Jonah Hill have careers in Hollywood suggests that our nation sorely needs a Congressional inquiry into ethnic nepotism in the entertainment industry.

In the intervening quarter-century since that Politically Incorrect episode was taped, everything I’ve ever seen or heard about Michael Rapaport suggests that he would have been perfectly cast as the lead in a screenplay idea I had about 20 years ago called Black — Like a Nigger. Although it never got past the “screenplay idea” phase, it was to be a pseudo-documentary about a phenotypically white man named Randy who was mentally impaired and didn’t realize that it might not be the greatest idea to put on blackface and attempt to hug random black strangers in public to demonstrate his compassion for their plight. Randy knew his intentions were noble, so he had no idea why he kept getting punched.

But that’s Michael Rapaport’s entire world — he doesn’t understand why black people hate him for talking black and for even scolding actual blacks for not being black enough. And when white people mock him for being a walking kosher minstrel show, he accuses them of hating blacks rather than of hating Michael Rapaport:

The term WIGGER is what white people call other white people who they accuse of actin black, the USER of the word really dislikes black peeps

No, see, it means I really hate non-blacks who use words such as “peeps.” And apparently, so do many blacks.

“Michael Rapaport Is the Worst Kind of White Man,” writes Michael Harriot in the Root, slamming him as “the half-chewed marshmallow center of a racism s’more” and a “phlegmlike fuckboy.” He notes Rapaport’s tendency to start social-media wars with black women and quotes his comments about Real Housewives of Atlanta star Kenya Moore’s feet:

If I were king, I’d make it illegal for anyone with less than 95% sub-Saharan African ancestry to use Moorish slang terms such as “them shits.” Such spectacles are a disgrace to both the black race and the white race.

Also at the Root, Damon Young writes, “I’ve Never Met Anyone As ‘Black’ as Michael Rapaport Tries to Be”:

As far back as 2007, a black blogger selected Rapaport as “Wigger of the Week”:

Michael Rappaport [sic] is the stuff of wigger dreams. I’ve never been so thoroughly annoyed by someone I ain’t ne’er met. . . . He’s a clumsy actor who’s always wildin’ out like he’s about to pledge somebody. But Mike is hardcore with his negro dick-riding prowess. He’s always showing up to events in a fitted cap and some Marc Ecko like they giving away free street cred cards. He’s just a fugly, melanin-challenged mess. I know I sound salty like he done stole my favorite puppy but illl. . . dude is a problem. . . . I just wanna punch the paleness off him.”

Rapaport is so cluelessly fake-black that he gets into arguments with three black podcast hosts, two of them rappers, about why Jay-Z’s new album sucks. He’s so fake-black that when he puts his arm around a black NBA player during a TV interview, the player physically threatens him. Even white NBA players wind up physically threatening him. He’s such an annoying Jigger that LeBron James — widely considered the best active basketball player on Earth — routinely mocks him along with friends.

Last week, Rapaport lost a years-old defamation lawsuit against Barstool Sports — an irreverent site that is so obstinately unwoke that record producer Steve Albini, who once recorded under monikers such as “Rapeman” and “Run, Nigger, Run,” says that its owners and pundits should be deplatformed and rendered eternally unemployable — was thrown out of court for lack of merit. Rapaport claimed he’d been defamed by a T-shirt that Barstool was selling depicting him as a clown with a giant red blemish on his chin. The suit claimed the image insinuated he had herpes, despite the fact that no mention of herpes was made, Rapaport routinely appears in public with a giant red sore on his chin, and Rapaport allegedly made herpes jokes at his own expense.

For some reason, Rapaport saw this crushing legal defeat as an opportunity to air some private messages he received last December from NBA star Kevin Durant — widely considered the world’s second-best active basketball player — which touch upon the failed lawsuit and basically mock Rapaport for being a homosexual white boy. Among those messages from the six-foot-ten-inches Durant:

I swear Ima spit on your face when I see your dirty ass.

All u do is cock suck other men for attention. . . . Your life is a joke u Fuckin pale cock sucker

Get some sun it’s fuckin with your brain

So despite decades of Rapaport’s shameless sucking-up to blacks, they still see him as a pale-faced devil clown who will face a righteous extinction in the inevitable Melanoma Genocide.

Whites don’t want him either, especially with his blind tendency to refer to them all as “pasty white crackers” in a way unsurprisingly reminiscent of how Kevin Durant demeaned Rapaport.

And I suspect that Rapaport’s unending Jiggery behavior is as mortifying to global Jewry as Tom Hanks’s wigger son Chet is to the Hanks family.

If right-thinking and well-meaning whites, blacks, and Jews can join forces to strike the Wigger Problem at its roots, there may yet be hope for this seemingly hopeless nation.

« One Carjacking Embodies the New America