One Carjacking Embodies the New America 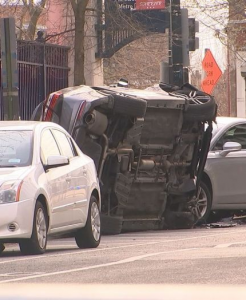 An elderly Pakistani UberEats driver was murdered by black teens in DC last week. Sixty-six-year-old Mohammad Anwar died after he was thrown out of the vehicle two black girls carjacked in broad daylight, right in front of National Guardsmen. The black teens survived the car wreck, unlike the hapless Anwar. The Pakistani driver lay dying on the sidewalk while one of the carjackers demanded the Guardsmen retrieve her phone from the wrecked vehicle. No remorse, no pangs of guilt, nothing besides the desire to retrieve the precious phone.

Video of the event went viral, drawing a wide array of outrage at the cruelty and senselessness of the crime. This one event captured modern America in all its stupidity. Here’s how.

The two carjackers were black teenagers aged 13 and 15. They deployed a stun gun to steal a car in the middle of the day without any care in the world. When confronted with the gravity of their crime, they were completely unmoved. All they cared about was their own property. It didn’t register that this carjacking was wrong or anything to apologize for. The media is adept at portraying black crime as motivated (or justified) by poverty and systemic racism. Black criminals just made an honest mistake they feel very, very bad about. The DC carjacking shows the true nature of black criminality. It’s vicious, it’s senseless, and it’s extremely common. These aren’t good kids who made a mistake. Life in modern America means existing with the Black Undertow and pretending it’s not a serious problem.

This was yet another case of blacks attacking Asians — albeit a South Asian. Anti-Asian “hate” is all the fuss right now, and the government and media blame white America and Donald Trump for it. Reality shows it’s actually their favorite pets who are behind it. The carjacking reaffirms this uncomfortable truth.

The Chaos of American Cities

The carjacking occurred in broad daylight in a relatively safe area of the nation’s capital. The good times brought to many American cities by gentrification seems to be on the steep decline. The murder rate now stands close to the highs of the early 1990s. Carjackings and other dangerous crimes are way up. It’s no longer guaranteed you can avoid trouble by staying in the “nice” area of a major city. Any place can be the setting for an assault or robbery. America’s cities are returning to the disorder of the late 20th century.

Much of the crimewave is the result of joke city leadership. The DC auto theft highlighted the clowns who run our major urban areas. Mayor Muriel Bowser tweeted that carjacking is a “crime of opportunity” and listed ways for DC residents to avoid this unfortunate event. The list treated carjacking like a natural occurrence, similar to a rainstorm. There was of course no call for tougher policing or laws to combat the crime wave in the city. City politicians want to pretend systemic racism is a far greater threat than black criminality.

Let’s go back to one of the basic facts of the case: Mohammad Anwar was a 66-year-old Pakistani immigrant working for UberEats. That describes much of our economy right now. People from all over the world immigrate here and take menial jobs. Many old people, native or immigrant, can’t retire, and they work until they die. Do we really have a healthy economy when it depends on megacorporations importing old foreigners to deliver Chipotle for serf wages?

The entire carjacking was witnessed by National Guardsmen. . . who did nothing besides call the cops and help the black teens out of the wrecked vehicle. The Guard is still in DC in order to protect Congress from imaginary white supremacists. But they can’t even stop petty crime, much less actual threats. America may have the strongest military on paper, but our troops are often no better than the average citizen. They will stare and gape at crimes, and do nothing. It’s only the police who will stop crime.

As is the case whenever black crime is noticed, liberals refused to see it as black criminality. They even condemned those who dared mention the race of the suspects. Yahoo White House Correspondent Hunter Walker tweeted: “There are a lot of far right commentators sharing this horrific story and highlighting the fact the perpetrators are Black.” He complained that conservative media is copying “videos taken directly from the far right explicitly racist voices including popular Gab and Telegram accounts.” According to Walker and his class, the only way to make sure “Anwar’s life mattered” is to not notice the black criminals. These are the same people who spent the previous days blaming all whites for the Atlanta spa shooting. Liberals can be mugged by reality and still retreat to fantasy.

The one interesting thing to note, as evinced by Walker’s meltdown, is that ordinary conservatives noticed the racial angle to the story. Many of the commentators blamed timeworn factors, such as “postmodernism,” “teen culture,” and “bad schools” — but most of their readers got the real message. It’s too hard to ignore the color of crime when cell phone footage shows you the suspects without the media’s filter.

For the first time in many years, crime is a top concern for American voters. Our leaders are doing everything in their power to facilitate rising lawlessness, from neutered police to jailbreaking criminals. More Americans will come face to face with the ugly reality of the current state.

Our new America isn’t Mount Rushmore, the Jefferson Monument, or anything grand or impressive — it’s the D.C. carjacking.

« How the Coronavirus Took Over the World

» Requiem for a Jigger