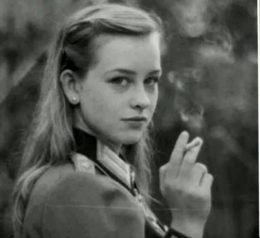 Haverbeck in her youth.

Lubert steeled himself. The war had been over for more than a year, but his daughter had still not surrendered. He needed to suppress this little putsch now. . . At Frieda’s bedroom door, he knocked and called her name. He waited for an answer that he knew wouldn’t come then entered. She was lying on her bed, her legs raised a few inches off the mattress. A book — a signed copy of Thomas Mann’s The Magic Mountain, which his wife Claudia had given him for his thirtieth birthday — was balanced across her feet. Frieda did not respond to her father’s presence but continued to concentrate her efforts on keeping the weighted legs in the air. They were beginning to tremble with the strain. How long had she been in this position — one, two, five minutes? She started to breathe furiously through her nose, trying to disguise the effort, refusing to show weakness. Her Strength was impressive. . . another of those Madel routines she had religiously kept up since the war.

With a cast-iron determination born of her obvious intelligence and befitting her proud heritage, the 91-year-old Ursula Hedwig Meta Haverbeck-Wetzel continues to defy Germany’s tyrannical and ever more encompassing Volksverhetzung laws from her cell in JVA Bielefeld-Senne. The outspoken and undisputed Grande Dame of Revisionism was sentenced to two and a half years in prison at a court hearing in Verden.

Since the death of her husband Werner Georg Haverbeck in 1999, she kept active: she served as the Chair of the Heimvolkshochschule Collegium Humanum (Folk High School), an international adult education establishment founded in Vlotho in 1963, acted as President of the German section of the World Union for the Protection of Life, was a former activist in the now-banned Ecological Democratic Party, was the first Chairperson of the Memorial Sites Association, the Verein Gedachtnisstatte, to commemorate her nation’s war dead, and was the deputy director of the Society for the Rehabilitation of Those Persecuted for Refutation of the Holocaust. For all intents and purposes, Haverbeck is now a political prisoner in Merkel’s uber-liberal police state.

Born in Winterscheid, now part of Gilserberg, in November 1928, Haverbeck was soon to become one of the many displaced refugees fleeing the Red Army’s notoriously bloodthirsty advance into East Prussia. Subsequently living in Sweden and Scotland, she studied pedagogy, philosophy, and linguistics. Her husband Georg, to whom she was married for over fifty years and with whom she shared an entire worldview, was himself a writer, publisher, folklorist, and sometime parson to a local Christian community. He also founded the Imperial Federation of Nation and Homeland and was a scientific consultant to the Ecological Democratic Party before he and his wife were expelled by its Bremen branch for attempting to forge links with the ultra-patriotic National Democratic Party of Germany (NPD).

Undeterred by such truculence, Haverbeck has subsequently emerged as one of Germany’s leading advocates for freedom of expression, a high-profile opponent of censorship in the media, and a spokesperson for the right to peaceful and lawful assembly in her native land. This has led her into direct conflict with German Justice Ministers like Heiko Mass, who attempted to undermine freedom of expression in Germany with his Netzwerkdurchsetzungsgsesetz (Network Enforcement Law) to combat “online hate speech” and “fake news,” as well as his successor Katarina Barley, who famously demanded the reopening of the German-Austrian border, which was closed as an emergency response to Chancellor Merkel’s irresponsible open-door invitation to the Third World which precipitated the latest phase of the European migrant crisis.

Haverbeck has acted to end the defamation of the men and women who played a part in Germany’s recent wartime history, like Oskar Groning, the so-called “accountant of Auschwitz,” and SS guard Reinhold Hanning. She’s also insisted in a letter to Detmold’s mayor, Rainer Heller, “that Auschwitz was a labor camp.”

Because of this, Haverbeck has become a prime target for state persecution. She’s had a series of fines levied by the Court of Bad-Oeynhausen and the Dortmund Regional Court between 2004 and 2007, a further fine for “offending” Charlotte Knobloch, President of the Central Council of Jews in Germany in June of 2009, and more recently a range of sentences to various terms of imprisonment in 2015 and 2016 for so-called Holocaust denial. Eventually, a raid on her home by the State Criminal Investigation Office of Lower Saxony led to her being taken into custody by the police on May 7th, 2018.

Undimmed and unrelenting, the iron maiden’s brave stand for open discussion and debate about the past has been made even more pertinent in recent months given a recent extension of the draconian spider web of Volksverhetzung laws: a British citizen, Lady Michelle Renouf, was charged for comments she made in February 2018 about the murderous bombing of Dresden at a rally commemorating the victims, held under the shadow of the city’s famous Baroque Lutheran Frauenkirche. Following a trial set for October 2020, these charges could result in a sentence of up to five years.

Negationism can be considered as a specific manifestation of antisemitism since it both constitutes a denial of crimes against humanity, meaning here the Nazi Holocaust, and an incitement to hatred against the Jewish community. Denying crimes against humanity and disputing the existence of clearly established historical events do not constitute scientific or historical research and shall be considered incitement of hatred toward Jews.

If this principle is uniformly adopted and enforced across all member states, it could be the death knell not only of justice, but also historical inquiry as know it.

The truth about events is sometimes very complex, but still carries a strong moral resonance and has an overarching political bearing on our present times. Myths can no longer be sustained through judicial means alone — and in recent days, the Imperial German flag is carried at the forefront of protesting crowds to the very steps of the Reichstag itself.