Liberty & Justice for All: The Case for Canine Suffrage 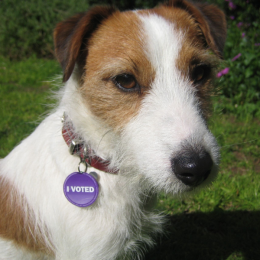 I think that dogs should be allowed to vote.

In America’s courageous fight for universal suffrage, the franchise has been extended to all those we believe are stakeholders in our nation’s future. Women, people of color, even felons who have had their rights restored; we all agree that they share in our country’s fate, for better or for worse. But we’ve overlooked a demographic that has just as much of, if not an even greater, stake in the future of the nation than any of those previously mentioned. It’s an injustice seldom talked about; millions of members of this group are denied the basic right to cast their ballot every election year, despite the fact that election outcomes will affect them directly. In fact, this grievous oppression is made even worse by the possibility that this group is perhaps our single best chance at restoring the United States to prosperity that now seems lost to history. I am talking about our four-legged, furry friends, whose collective interests align with those of the New Right in ways that are more than mere coincidence.

The European man and his pack of canines have a codependent history that stretches back to remotest prehistory, when we first invited wolves into our fold and showed them our way of life. We’ve become inseparable since then; 64% of American households have at least one pooch running about, and they’re bound to have opinions about how they would like the country to be run to ensure that they’re treated nicely. If we extended the franchise to dogs, they would be voting for their interests, and in doing so, voting for societies that would be comfortable for the both of us due to the various incentives that interlink our economic, cultural, and security policies.

For one, if we sent the pups to the polls, we definitely wouldn’t be dealing with any pandemics of Chinese viruses. The second that dogs in the US found out that their brothers and sisters are considered a delicacy in various parts of mainland Asia, they would put the brakes on any further trade with a country so plainly hostile to their interests. You’d have a hard time attempting to explain to a canine the value of cheap consumer goods, smartphone sweatshops, and continental-scale toxic pollution. “You see, Fido, we need people that eat you to help manufacture the gadgets that distract me from you.” No dice there!

A pooch-elected Commander in Chief would have the canine demographic breathing down his throat at all times, so the second we caught wind of an unexplained pneumonia affecting people in Wuhan, the borders would have been shut to squatting tourists and Off-White® clad exchange students posthaste — regardless of any rosy WHO assessment. “Not only do they eat us, now they’re spreading the plague? Pass!” The dogs of the country might even back a measure to deport the lot of the demographic already in the country on the grounds that they might be harboring a Corgi chow mein mind-virus, just waiting to be activated.

Wise foreign policy aside, dogs would have a lot to say about domestic policy, as well. It’s no secret that dogs can’t stand being left alone. When we greet our mutts at the door after work, they explode with such enthusiasm that you’d think they were under the impression we had left them for good. Workforce participation in the United States is at an all-time high, and women leave the house just as often as men to go to work. If they have children — and that’s a big if for many urban households — they usually leave for school during the day as well. Poor Winn-Dixie is now left home alone, all day.

Women coming into their own purchasing power is hailed as a progressive triumph, a win for gender equality. Really, it’s more often a matter of simply making ends meet. Real wages in the United States have stagnated, making it more expensive than ever to raise a family, pay the mortgage, or buy dog treats. Working mothers are no longer a liberal novelty; they’re a necessity.

If dogs were to form a voting bloc, they’d go out of their way to ensure there’s someone home to play fetch with them at all times. They’d vote overwhelmingly in favor of policies that grant tax breaks to heads-of-household with children, strengthen the power of the worker in collective bargaining, and move high-paying industries back into the country. They’d also support policies that make it easier for kids to be homeschooled, and tweak national education policy to encourage teenagers to go to university in their hometown instead of abandoning their pups in flights of fancy to schools in New York. Kids eventually grow up, and have to leave anyway, but generous maternity leave and benefit policies would mean that the dogs of the country will have an endless supply of kids to muck about the woods with.

While dogs would have stopped the COVID-19 pandemic in its tracks with their sensible foreign policy attitudes, they’re probably having a blast with all the remote working that’s going on due to lockdown measures. Even in a restructured economy favoring national industry, families, and children, dogs would massively be in favor of ushering in a tech revolution allowing their owners to work fewer hours from home. More time for kids, more time for tug-of-war, everybody wins.

Municipal jurisdictions would suddenly have to contend with the demands of the dog electorate should they win the franchise. The American suburban form is one severely lacking in recreational opportunities for far too many of its residents, both for featherless bipeds and furry quadrupeds. One-third of Americans don’t have access to a park within walking distance, an oversight that would swiftly be corrected by legions of canines demanding green space to stretch their legs out when they go to the polls. Dogs would also balk at the numbers of their species being struck by automobiles every year — upwards of one million — and demand substantial changes to land use, keeping speeding cars away from the places that they and their owners walk. In the end, a dog-elected city council would shift their focus onto sustainable placemaking, like the livable, Classical cities of Europe, instead of Ponzi scheme-like greenfield development and dangerous suburban sprawl.

A canine electorate would have more bones to pick than this, though. If they turn their attention to the Southern border, they’d be appalled by Mexican dogfighting rings establishing footholds in Texas, puppies being used as mules for heroin trafficked in from Colombia, and the cruel habit of Latinos putting sombreros on Chihuahuas and making them say “Yo Quiero Taco Bell.” After America’s desert frontier is secured, dogs would turn their attention inwards and address the tendency of African-Americans and spousal abusers to harm animals, indubitably resulting in a day of reckoning for those that hurt other dogs. When it comes to other matters of domestic policy, dogs would likely choose those that favor white households, as they’re the group with the greatest tendency to keep a pooch around. “What’s good for them would certainly be good for us!”

All told, dogs make a strong case for their enfranchisement. When humans debate about suffrage, there is often a consideration of whether the group in question would vote in such a way that the values of the country would not be damaged. When you consider that blacks tend to vote for hair-sniffers with dementia, and women will vote for moneyed war criminals on the basis of identity and equality (and cry when they lose elections), it doesn’t seem like the average Golden Retriever will do any more damage than has already been done. In fact, their interests seem to align with ours more than anyone else heading to the ballot box. If the United States is to be a democratic republic, with liberty and justice for all — yet remain a country of prosperity for itself and its posterity, then we ought to be willing to shake hands (or paws) with the groups that will give us a fighting chance, no matter how bad they may smell when they get wet.

It’s time to give dogs the right to vote.

» Now in Print & Shipping!
The World in Flames:
The Shorter Writings of Francis Parker Yockey