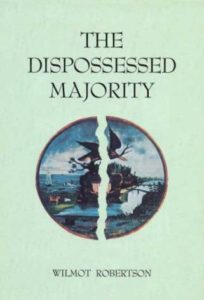 The past few weeks have seen a revived interest in conservatism – particularly, what the ideology even means in modern America and how it will fare in the current Trump era and beyond. Recent developments have, for the most part, been small steps forward, and indicate an openness to nationalism.

A manifesto in First Things titled “Against the Dead Consensus” and signed by conservative Catholics such as Sohrab Ahmari and Rod Dreher caused controversy and sparked an ongoing debate. The statement decried the inability of conservatism to defend the culture against Leftism and said the movement “too often bowed to a poisonous and censorious multiculturalism.”

A new organization called the Edmund Burke Foundation calls itself “a public affairs institute dedicated to developing a revitalized conservatism for the age of nationalism already upon us.” They will hold a “National Conservatism Conference” in July in Washington, DC. Some of the speakers are on the Dissident Right (or close to it), such as Tucker Carlson, Amy Wax, Peter Thiel, and John O’Sullivan. (Although why is a dud like Rich Lowry involved in this event?)

Human Events, a long-time conservative publication that had shuttered in 2013 after nearly seventy years of publication, was revived in May under the leadership of Raheem Kassam and Will Chamberlin. Mr. Kassam has admirably defended Enoch Powell and pointed out the reality of Muslim “No-Go Zones” in Europe.

Wilmot Robertson (1915-2005) dedicated a chapter to conservatism in his 1972 book, The Dispossessed Majority. According to F. Roger Devlin, no less an authority than Sam Francis called the book “his own generation’s authoritative statement of racial nationalism.”

The book went through five printings, and my version is the latest one (1996), so it is updated a bit from the original. But what Robertson had to say about conservatism decades ago still has relevance today and may tell us about the prospects for American conservatism, whether it embraces nationalism or not.

The classical conservative upholds the mystique of authority and rank in society. He is an aristocrat by birth, anti-democratic by nature, and his principle concerns are family, race and continuity. To him the chain is more important that the links. He perceives the divine afflatus in man, but he also recognizes the odds against which it is working. He places the collective wisdom of the species (folkways and institutions) above the wisdom of governments and individuals (laws and politics).

Who is the modern conservative and what does he believe?

He favors democracy up to a certain point, believes in racial equality – or says he does – and wants less government, not more. He is all for human rights, but is equally, if not more, enthused about property rights. Believing himself to be a rational, commonsensical person, he takes his religion with a grain of salt. He is, in sum, a classical liberal and has strayed as far from the fountainheads of classical conservatism – Plato, Dante, and Hobbes – as the modern liberal has strayed from Locke.

A brief history of American conservatism

Conservatism in the United States got off to a surprisingly good start, in Robertson’s view, despite the fact that the most conservative element – one hundred thousand Loyalists – were expelled or fled to Canada during the War of Independence. He counts Washington, Hamilton, and the Federalist party as Burkean conservatives, and believes the Constitution was conservative enough for men who had just set up a representative government that horrified European aristocrats.

From there, Robertson describes conservatism as slowly weakening, first through Jeffersonian and Jacksonian democracy, then through the Civil War, which divided Northern and Southern conservatives. He cites Theodore Roosevelt as an exponent of “perhaps the last expression of an American conservativism with a high sense of national purpose.” But it was the one-two punch of the Great Depression and the Second World War that nearly finished off American conservatism.

As the New Deal wrestled with the great economic problems of an increasingly industrialized society, conservatives stuck to defenses of unrestricted capitalism. Conservatives were blamed for the Depression, and liberals were given credit for alleviating it. Then, the rise of European fascism gave Leftists another stick with which to beat conservatives. See if this isn’t familiar from today’s politics:

There are, of course, vague bloodlines that tie certain aspects of conservatism to the Nietzschean attitudinizing of Hitler, just as there are historic ties that link certain aspects of liberalism to the demoniacal politicking of Lenin. Both liberals and conservatives had often taken advantage of these tenuous analogies for purposes of mutual slander. But since liberals held the reins of power from the mid-1930s on, they were better able to make the calumnies stick.

These two setbacks caused normally conservative voters to vote Democrat for a generation or more. And it wasn’t just political conservatism that declined. Intellectually, the movement was almost non-existent. The works of Madison Grant and Lothrop Stoddard “fell into disrepute.” Burkean conservatives Irving Babbitt and Paul Elmore More were forgotten. Even economic conservatives such as Wilhelm Ropke, F. A. Hayek, and Ludwig von Mises “were only given cursory attention.”

It wasn’t until the 1960s and ‘70s when black crime, riots, forced busing, and affirmative action forced many whites to rethink their allegiance to the Democrats. These issues (along with inflation) helped usher in conservative political victories in the 1980s. But by that point, they were pyrrhic victories. Liberals were in complete control of every American institution and set the terms for debate. Again, see if this does not exactly describe our current politics:

Before he was allowed a national platform the modern conservative had to demonstrate that he was a member of the loyal opposition, that on the “sensitive” issues he was of one mind with the liberal himself. No public manifestation of classical conservatism – i.e., no forthright attack against democracy and minority racism – would be tolerated. If the fires of minority illiberalism and minority racism could not be quenched by modest, low-decibel appeals for decorum, they were to be left raging. The only notes of dissention permitted the modern conservative were the safe ones. He could be more reverent toward big business, property, patriotism, religion, government decentralization, and law and order. He could be more critical of socialism, Marxism, Castro, overregulation, labor unions, and budget deficits. But the permissible differences were differences in degree, not in kind. On the larger issues, the issues behind the issues, modern liberalism and modern conservatism were often becoming synonymous.

According to Robertson, not one prominent conservative has failed to observe these rules. This includes Robert Taft, Barry Goldwater, and Ronald Reagan. Moderates such as Dwight Eisenhower and Richard Nixon “both preached the fundamental tenets of modern liberalism as loudly as any American in public life.” Even mavericks such as George Wallace “complied with the ban on open discussion of the race problem. In his campaign speeches he relied on inference rather than statement, allowing his listeners to draw their own conclusions whenever he attacked school integration.”

So why do whites still vote overwhelmingly for conservatives and Republicans? Robertson notes that conservative politicians are almost always white and nominally Christian. They are usually not strident, abrasive, or openly anti-white, like many liberals and Democrats. They do not rub whites the wrong way, since they seem to be for everyone, and not just for minorities. Robertson does not mention this, but Republicans who do flirt with minority pandering by attacking “white racism” often find themselves with fawning media coverage, but few votes (see the GOP primary efforts of Jack Kemp in 1988 and Rand Paul in 2016). The “Trump 2020” re-election team may want to keep this in mind.

Perhaps it would be better for whites if conservatives were as openly anti-white as liberals:

By combining the humanistic abstractions of classical liberalism with modern liberal notions of equality and social democracy, the modern conservative’s net effect on Majority members is to anesthetize them in to dropping their racial guard at the very moment they need it most.

That is why, of all those who consciously or unconsciously oppose the Majority cause, the modern conservative is the most dangerous.

American conservatism may well move in a more nationalist direction. The First Things letter, the lineup for the “National Conservatism Conference,” and the new Human Events all seem to augur a more adversarial approach to combatting Leftism. Most Counter-Currents readers will likely find this preferable to Conservatism Inc. and the Bush/McCain/Romney Republicanism of recent decades. It seems the new conservative leaders, echoing Trump, will be more open to attacking multiculturalism, immigration, political correctness, and affirmative action. They certainly seem less likely to meekly accept the insults, slights, and double standards of Leftists.

Robertson himself would have noticed that the leaders of these various efforts are named Sohrab Ahmari (a Persian who converted to Catholicism), Yoram Hazony (an Israeli academic), and Raheem Kassam (of Indian Muslim stock, but now an atheist). He would have classified these men as “Unassimilable Minorities,” meaning they cannot truly become part of the historic Majority due to racial and religious differences. Though their hearts may be in the right place, the American Majority will not be saved or preserved by these men.

So, can conservatism be of any help to whites as they battle a dispossession that is much stronger and closer than when The Dispossessed Majority was written? Robertson doesn’t believe so, at least if conservatism survives in its present form:

Modern conservatism, which lacks the racial drive of modern liberalism, has been and will continue to be of little help in unifying the Majority and raising it to the high pitch of performance necessary to reverse its present decline. Stronger medicine is required for those who are trapped in a racial conflagration getting out of hand and who must fight fire with fire to avoid being consumed in the flames.