An Esoteric Commentary on the Volsung Saga, Part III 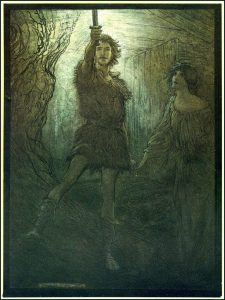 In our last installment, we met Volsung (“stallion phallus”), who becomes a great King and sires eleven children: the twin brother and sister Sigmund and Signy, and nine brothers (who go unnamed). Volsung builds a “magnificent hall” around an immense apple tree whose branches weave about the beams of the roof. The name of the tree is Barnstokk, which can be translated as “child tree” or “family tree.” Obviously, it represents the Volsung clan itself.

In Volsung’s eyes, building the hall around the tree is likely an act of protection – of safeguarding the clan, as represented by the tree and its fruit. But what we find in Chapter Three is that just as the tree is confined by the hall, its branches entangled in the beams, so has Volsung entangled his family within social ties of an unfortunate nature. Specifically, he intends to marry his daughter Signy off to Siggeir, King of Götaland, a man she “was not eager to marry.” Nevertheless, her father insists that it is “advisable” that she marry Siggeir. In other words, Volsung’s intentions are to secure his family and Kingdom by forming an alliance. Signy acquiesces, “as she did in all matters concerning her.”[1]

For the wedding feast, Volsung invites Siggeir and his men to the great hall, where the celebration takes place around the apple tree. Suddenly, a stranger walks into the revels. “He had a spotted cloak draped over himself, he was barefoot, and he had linen pants tied to his legs. He had a wide-brimmed hat on his head, and he was very tall, elderly, and had only one eye.” Needless to say, this is Odin (though the text says “no one knew who he was”). From his cloak he draws a sword and plunges it into the tree trunk “up to the hilt.” Odin then says, “Whoever draws this sword out of the tree trunk will receive the sword as a gift from me, and he will say truly that he never held a better sword in his hand than this one.”[2] The old man then swiftly leaves the hall.

Of course, we are immediately reminded of the Arthurian “sword in the stone” motif. However, in Arthurian legend, the sword signifies the right to rule: He who can pull the sword from the stone is the “true king.” Here, nothing like this is intended. The one who can pull the sword from the tree is simply the intended recipient of a very good sword indeed. We suspect, however, that much more may be going on here. Surely the crafty Odin cannot be offering a gift with no strings attached . . .

All the men try to pull the sword from the tree, but they take turns based on social rank. While we, the readers, surmise that the sword is intended for a specific person (and only for him), the characters in the story clearly believe that more than one person might have the strength to free the sword. Thinking it would be better that such a sword wind up in the hands of a well-born man, the higher-ranking men try first. After a number of those men try and fail, it is Sigmund’s turn (recall that he is Volsung’s son and Signy’s twin). Sigmund pulls the sword out of the tree with ease: “it came out in his hands as if it had sat there loose for him.”[3]

Sigmund’s feat clearly frustrates expectations of what “ought to be,” where those expectations are based entirely on social conventions concerning status. Once again, the saga depicts one of the Volsung heroes (and we will shortly see Sigmund develop into a great hero indeed) somehow breaking social convention or stepping outside its bounds – and, once more, it is at the instigation of Odin. The god has enchanted the sword so that it is not the “highest ranking” man who wins it, but rather the man who is the best – who deserves the sword through nature, not convention. But there is a further level here as well, for Sigmund’s winning the sword is intended to undermine, in a sense, yet another socially-sanctioned arrangement: the marriage of Signy and Siggeir.

After Sigmund pulls the sword from the tree, Siggeir is barely able to conceal his rage and envy. “King Siggeir offered to buy the sword from Sigmund for three times its weight in gold.” However, Siggeir responds, “You could have taken this sword from the tree as easily as I did, if it had been meant for you. But now, because it came to me, you will never receive it from my hand, even if you offer me all the gold you own.” This only enrages Siggeir further, for he suspects that he is being mocked. However, “because he was a man of underhanded character,” he pretends as if he is unphased by Sigmund’s refusal. The text tells us that that very evening, Siggeir began plotting his revenge.[4]

Why is Siggeir so enraged by Sigmund winning the sword? Is it just because he covets such a great prize? H. R. Ellis Davidson mentions the Scandinavian custom of plunging a sword into a tree or post in wedding celebrations. She notes that “in Norway there was a custom surviving into recent times for the bridegroom to plunge his sword into the roof beam, to test the ‘luck’ of the marriage by the depth of the scar made.”[5] The sexual connotations of this are obvious. Davidson also suggests that the sword represents the “luck” (hamingja) of the family itself. It is possible that Siggeir is entirely aware of this symbolic significance of the sword, “and that its possession would symbolize the ‘luck’ which would come to him with his bride, and the successful continuation of his own line in the sons to be born of the marriage.”[6] According to convention, it really should be Siggeir for whom the sword was intended. When it becomes clear that this is not the case, he feels grievously insulted.

All of this seems reasonable, and we can expand upon it. Davidson also invokes Tacitus, who mentions that among the Germans it was the custom that the bride gave her groom “some weapon.” The bride, too, received weapons from her husband (among other gifts), and she was expected to hand all these wedding gifts “on to her children, unimpaired and in worthy state, which her daughters-in-law may receive and which may be handed on again to grandchildren.” Certainly, the motif of a weapon being safeguarded by women and passed down to later generations is one of the most important elements in the plot of the Volsung Saga. Tacitus tells us also that the exchange of these wedding gifts was considered “their greatest bond, these their sacred rites, these their marriage divinities.”[7]

Given all of this, it seems clear that when Odin appears at the wedding with his sword, in effect he is providing Signy’s wedding gift to her husband. (It is natural that Odin should perform this function, since he is, after all, Signy’s great-great grandfather and the progenitor of the entire clan – although the others present are unaware of this.) When Sigmund proves to be the only one capable of receiving the sword by pulling it from Barnstokk, this effectively identifies him as Signy’s husband! Of course, this analysis of the situation further supports Davidson’s claim that Siggeir’s rage is due to his understanding of the symbolic meaning of the sword, and of Sigmund’s possession of it. Those who know what is to come in the saga know that Sigmund will become Signy’s husband – not in the eyes of society and social convention, but in the eye of Odin. The incest of Signy and Sigmund, which, as we will see, Odin brings about through an elaborate manipulation of events, is the necessary condition for producing the next generation of the Volsung clan.

Throughout this essay I have repeatedly claimed that one of the key features of the saga is that in order for the Volsung clan to flourish and multiply, Odin and its members must continually violate conventional standards of morality and social order. The incest of Sigmund and Signy is certainly the most notorious example of this – although, arguably, greater and even more shocking examples are to come.

We have seen that the first step Odin takes toward making this incest possible involves a violation of the conventions surrounding weddings and their celebration. It is he who appears as an unannounced and uninvited guest with – as I have argued – the bridal gift intended for Signy’s husband. And it is Odin who, through his magic, manipulates the moment so that Siggeir, Signy’s husband according to law and convention, impotently struggles to win the sword, but fails. Odin’s plan is for the Volsungs to bear further fruit through Signy – but not with the participation of the loathsome Siggeir. Instead, Odin signals his displeasure with King Volsung’s plan to marry his daughter off to an inferior man, and symbolically declares the winner of the sword, her twin brother Sigmund, as her true husband. In the eyes of the law, Signy and Siggeir are already man and wife by the time Odin appears in the hall (presumably the wedding preceded the feast), but we will see that their marriage is a calamity, and that none of their children survive.

In terms of the significance of the sword, we must also bear in mind Davidson’s theory that the sword represents the “luck” of the clan. Of course, Odin is the progenitor of the clan itself, who continually manipulates it to his own purposes. We must therefore also consider the possibility that, through the sword, Odin is transmitting his own “luck” to Sigmund, and thereby once again is in effect inserting his own “seed” into the Volsung bloodline.[8] But why manipulate matters so that it is the twins, Sigmund and Signy, who continue the clan through incest? Why not arrange things so that Signy winds up with a worthy man of another clan – someone who is brave and true, unlike the weak and conniving Siggeir? And if incest must be involved, why does Odin have Signy commit incest with Sigmund, rather than with one of the other nine brothers? Obviously, it is key that Signy and Sigmund are twins. Odin’s clear intention is to produce as pure a Volsung as possible, through the intercourse of the most closely related male and female of the clan. The obvious intention is that a pure Volsung will be a super-Volsung, the greatest member of the clan yet.

We will see that this intention is only partially realized. But there is a great deal to be covered in the story, before we reach the notorious episode of the incest of the twins. And some of the episodes to come are among the most gruesome and fascinating of the entire saga. . . .

[1] The Saga of the Volsungs with the Saga of Ragnar Lothbrok, trans. Jackson Crawford (Indianapolis: Hackett Publishing, 2017), 4.

[8] On the sword as carrier of “luck,” see also Stephen E. Flowers, Sigurðr: Rebirth and the Rites of Transformation (Smithfield, TX: Rûna-Raven, 2011), 94ff.

» Video of the Day
Viktor Orbán: Say Goodbye to the Elite of ’68