The Legend of Suram Fortress 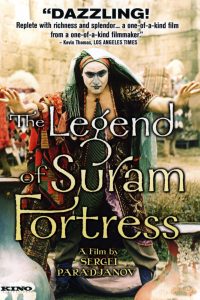 The Legend of Suram Fortress is a Georgian-language film directed by Sergei Parajanov and Dodo Abashidze based on a Georgian folk legend involving a young man whose sacrificial immurement within the walls of Suram Fortress enables the fortress to stand erect and protect the nation against foreign invaders.

Parajanov’s four major films, Shadows of Forgotten Ancestors, The Color of Pomegranates, The Legend of Suram Fortress, and Ashik Kerib, explore the traditional folklore, customs, music, dance, art, etc. of Ukraine, Armenia, Georgia, and Azerbaijan respectively through the lens of his surrealistic and poetic cinematic language. His idiosyncratic style brought him into conflict with Soviet authorities, who banned him from filming, sentenced him to hard labor, and imprisoned him three times. Parajanov was unable to resume directing until the mid-1980s, following a period of more than 15 years. While in prison he produced hundreds of drawings, sculptures, and collages, which are on display at a museum in Yerevan dedicated to his work. The Legend of Suram Fortress was the film that marked his return to cinema.

Like The Color of Pomegranates, Parajanov’s greatest work, which he likened to a series of Persian miniatures, The Legend of Suram Fortress contains little dialogue and consists largely of tableaux vivants evocative of tapestries or medieval illuminated manuscripts (perhaps the ritualistic crushing of eggs at the film’s start and end, calling to mind the egg tempera used in medieval art and Eastern Orthodox icons, is an allusion to this). Each frame is meticulously arranged and staged. The blend of elaborate staging and costuming, dance, and mime is rather reminiscent of kabuki theatre. The imagery is rich with color, often surreal and phantasmagorical. The fragmented, disjointed narrative and the eerie soundtrack, combining traditional folk music with discordant ambient music, contribute to the film’s dream-like quality.

The best-known literary adaptation of the legend surrounding the fortress is a novella written in the nineteenth century by Daniel Chonkadze (upon which the film is roughly based) that frames the story as an allegorical critique of serfdom. Parajanov instead focuses on the legend’s nationalistic dimension and portrays Zurab’s entombment as an act of patriotic self-sacrifice and martyrdom (there could also be a deliberate echo of Parajanov’s own imprisonment here) rather than a consequence of Vardo’s quest for revenge as in the novella. The film is dedicated to the memory of Georgian warriors “who have given their lives for the freedom of their country.” It reflects the Persian and Turkish influences that have left a stamp on Georgian culture but honors the nation’s distinct identity and extols tribal loyalty and folk tradition.

Set in medieval Georgia, the beginning of the film follows a serf, Durmishkhan, who is freed by his master and sets off for foreign lands planning to return and buy his lover Vardo’s freedom. When his horse is stolen from him, he becomes a lone wanderer. He soon encounters a merchant by the name of Osman Agha, who had been born a Georgian serf but stabbed his master, who had been responsible for his mother’s death, and fled the country, eventually becoming a nomadic merchant and converting to Islam. Osman Agha recounts that he grew prosperous, but his renunciation of his homeland and faith haunted him.

Durmishkhan joins Osman Agha’s caravan and begins working with him. He betrays Vardo by marrying another woman, and the despairing Vardo becomes a fortune teller. Meanwhile Osman Agha converts back to Christianity, asking to be absolved of his sins, and is told to return to his country. He gives up all of his worldly possessions and hands over his business to Durmishkhan, warning him not to become “a slave to money.”

Reborn as Simon the Piper, Osman Agha tutors Durmishkhan’s son, the young Zurab, in Georgian history, introducing him to a pantheon of Georgian heroes in the form of puppets: Nino (the saint who introduced Christianity to Georgia in the fourth century), Tamar (queen of Georgia during Georgia’s Golden Age), Parnavaz (the first king of Kartli, alleged to have devised the Georgian alphabet), and Amiran (the Georgian equivalent of Prometheus in Greek mythology). In the climactic scene of Zurab’s eventual immurement, there is a shot of one of the puppets, and Simon the Piper himself places a warrior’s helmet atop Zurab’s head and lays the bricks around him that seal his fate.

The blond-haired, blue-eyed Zurab rebels against his father’s rootlessness and becomes a defender of the Georgian nation and its Christian faith. The conflict between him and his father is shown in a scene in which his father responds violently to Zurab’s urging that he convert back to Christianity.

War approaches, but the nation is left vulnerable to outside invasion because Suram Fortress continues to collapse upon each attempt to build it. The king thus sends emissaries to Vardo in order to receive her advice. Vardo sends them all away but Zurab, to whom she reveals that the cement of the fortress must mixed with the body of a young man who is “tall, handsome, and blue-eyed.” Zurab responds enthusiastically, declaring that the fortress will be built. The film ends with the resulting completion of the fortress following his immurement within it and the king exhorting his men to take up their swords and serve their country “as this noble heart entombed in the fortress did.”

An interesting aspect of the film is its religious dimension. Orthodox Christianity in Georgia, like Catholicism in Italy, has largely retained indigenous pagan traditions beneath a Christian veneer. This is most evident in a sequence in which costumed worshippers pray to Saint George for protection in a smoke-enfurled parade led by a white horse, reenacting Saint George’s rescuing of the princess from the dragon, directly followed by a sequence depicting the celebration of Berikaoba, a pagan festival of fertility and rebirth involving masqueraded theatre. The custom of human sacrifice in the form of immurement itself is a motif in the folklore of a number of nations and stems from pagan ritual.

Rich with visual splendor and mystical power (yet never lapsing into pretension or pseudo-profundity), The Legend of Suram Fortress captures the magic of antiquity and offers a vision of a quasi-mythical past untainted by the ills of modernity that simultaneously exists outside of linear conceptions of time. Its depiction of a mythical quest for national identity will resonate with identitarians. The film represents a model of what cinema can achieve both as an art form and as an expression of national consciousness.

» Toward a White Wakanda