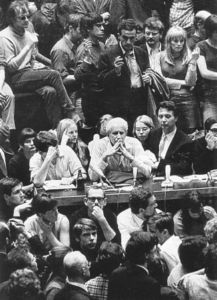 Herbert Marcuse and the New Left gave rise to Leftism as we know it today.

It is always popular to try to trace the ideological lineage of one’s political opponents back to a particular philosopher. This is not without merit. Marcuse and other New Left Marxists spawned many of the ills that afflict us today, but Leftism can only be properly understood as a governing ideology. It has reigned supreme in Western societies since at least the 1960s, and its subsequent development has not been driven by theorists and their books, but in response to the practical challenges that it has faced as a state religion. It has no bible to which one can refer, but central principles which are held inviolate by its supporters and a mythology supporting them.

One of the most significant developments has been in the Leftist attitude towards democracy. In the nineteenth century, Leftists were ecstatic about the concept. This enthusiasm is so deeply rooted in their ideology that even today, “democracy” is a favorite buzzword for the Left. But in all practical matters they are entirely hostile to it, and an anti-democratic leitmotif colors most of their myths. The Leftist state under which we all currently live sees its role not as the expression or representation of a people, but as the warden of an asylum and its population as charges in need of strict control and reform. Note that it has chosen populism — or at least the Right-wing variety — to play McMurphy to its Nurse Ratched in its own political mythology. To the extent that “Left-wing populism” exists in our society, it is a form of conservative (in the sense that it seeks to persevere the current order) reformism promoted by its supporters as an antidote to Right-wing populism, which is blamed on economic causes. These more radical Leftists charge their brethren in the establishment, as well as the more moderate ones, with enabling the far Right’s growth through their failure to alleviate economic insecurity and inequality.

The nineteenth-century Leftists were optimistic about human nature. Most of them were Rousseauians and believed that the society in which they lived had corrupted man. The unexpected rise of fascism to challenge the Left in the 1930s threw this belief into disarray. Leftists saw this not as a failure on their part or of their ideology, but of the people. They concocted psychological explanations for the public’s alleged inadequacy. Most influential on the Western New Left was the idea that the masses suffered from sexual repression and the “authoritarian personality.” The former, though absurd, at least kept with the older view that the problem was a corrupting influence from society; while the latter broke with this older tradition and found fault in the people’s very nature. Supposed “sexual repression” was something that the public could be liberated from, albeit under the careful guidance of an elite. For its part, the concept of the “authoritarian personality” pathologized the very personalities of much of the population, and implicitly called for the state to take up the role of therapist to correct this. By blaming Rightist authoritarianism on widespread personality traits, the Left created a justification for its own authoritarianism. When the people are authoritarian by nature, democracy becomes its own worst enemy. The Leftist can sincerely consider himself a champion of democracy while he supports the entrenchment of a small, credentialist elite and the censorship of dissent.

Leftist mythology’s leitmotif is that of a small, rational, and enlightened elite facing down the irrational, bigoted, backwards, and authoritarian masses. Unusual among political mythologies, the Leftist one exaggerates the unpopularity of its cause. Jackie Robinson, according to this mythology, was greeted by sneering racists in Cincinnati. In reality, he was warmly welcomed. This is only one of many such examples where history is falsified to make Leftism seem less popular than it actually was. The real story should be barely less agreeable to the anti-racist than the concocted one. But the Left’s great enemy, racism, is ultimately a grassroots, democratic phenomenon. To the extent that discrimination against blacks still exists, it is in spite of official condemnation. The dominant myth of anti-racism, the core of the Leftist ideology in its current form, is that blacks are disadvantaged not by any inherent traits, but due to white malice, which the masses, or at least a significant portion of them, hold onto despite their enlightened government’s best efforts to correct them. The portrayal of racism as a widespread sentiment is essential to this anti-democratic myth.

Most authoritarian regimes prefer to emphasize their popularity and conceal dissent. Leftism silences dissent, but it has no desire to conceal it. Most modern authoritarian regimes have relied on personality cults. By emphasizing the masses’ love for their leader, the regime can present itself as the fulfillment of the democratic will. Dissent undermines the leader’s claim to the masses’ adoration and is suppressed. This kind of regime at least values the ideal of democracy enough that it feels the need to legitimize itself in this way.

Leftism is not so idealistic. Leftism bases its legitimacy on its doctrines’ supposedly rational nature. Leftist discourse is characterized by an absolute faith in reason and the rationality of its doctrines, though this is rarely accompanied by any actual reason or rational defense of those doctrines. Leftism silences dissent not because it threatens any claim to democratic legitimacy, but because it could inflame the supposedly dangerously irrational and emotionally-driven masses. How often we hear condemnation from the ruling Leftist media of Right-wing populists due to their appeals to the fears or emotions of their supporters, as though it were a great evil for politicians to act as representatives of their constituents’ feelings and concerns. The existence of dissent is emphasized in Leftist propaganda because the “rational” Leftist therapeutic state feels more justified in its interventions the more that the “irrational” masses resist.

The current Left consistently champions the power of small elites over more populist, or democratic, governance. It is credentialist and hostile to autodidactism. It makes constant appeals to “experts.” It distrusts anything outside of establishment institutions. It calls for “evidence-based policy,” as though policy could be developed without values. There is no room for disagreement or debate; all contrary opinions are labelled misinformation. Leftism has no regard for basic democratic and liberal principles like open debate, or the freedom of information and ideas. In their view this gives undue power to those outside its control — to the fascistic masses — who thus, paradoxically, become a threat to democracy. The Leftist vision of democracy is of regular, but carefully managed, elections where everything that voters can read, hear, or see is tightly controlled to ensure a predetermined result. Every form of election fixing short of ballot stuffing is not only admitted, but celebrated. Leftists have no moral qualms about this. Every victory of good over evil in their mythology is presented in the same light: as a small group of elites triumphing over the benighted masses.

They are not wrong in seeing a genuinely representative democracy as the greatest threat to their rule. Most of their greatest victories have occurred in spite of the opposition of the majority of the public. At least 60% of Britons agreed with Enoch Powell’s 1968 “Rivers of Blood” speech at the time. Since 1975, a plurality of Canadians have wanted immigration reduced or kept the same, with always less than 20% favoring an increase. It has increased continuously anyway, however. When the American Supreme Court struck down all state bans on interracial marriage in 1967, less than 20% of Americans approved of miscegenation.

Far from too much democracy, as some Rightists might suggest, since the Second World War we have far too little of it. On nearly every issue the white public has been far more sensible than the elites, and where it has taken leave of its senses, it has followed elite trends. We live not in a “mass democracy,” but in a highly technocratic and elite-managed “democracy” where every effort is made to minimize public participation in politics while still holding regular elections. The Rightist response should be to champion a more populist, democratic form of politics; to fight for public debate over the technocratic diktats of “evidence-based policy;” for the free exchange of information and ideas over censorship; for the rule of elected representatives over experts; for open science and a populist academia that publishes its work freely online for all intellectually-inclined men rather than the credentialed few; for an intelligentsia of the learned, including self-taught and independent scholars, and not merely the credentialed; and for the democratization of information through the Internet to vanquish the archaic legacy media.

« Counter-Currents Radio Podcast No. 501 New Ask Me Anything with Greg Johnson

» A Runestone Raised for a Fallen Ukrainian Asatruar