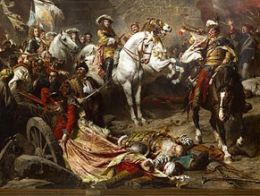 In times of crisis, it seems that there are always people prone to engage in pointless discussions, like those sons of Byzantium who debated about the sex of angels while they were besieged by the Ottoman invaders — an encirclement that would result in the suppression of their millenary empire. Today, the threat is not trivial, either: No less than one of the primary races on the planet, the white race, is at risk of being eradicated from the face of the Earth through a genocide of replacement, infertility, and miscegenation. And yet, there are individuals who insist on maintaining a divisive attitude towards other blood-related peoples.

These sterile and fratricidal quarrels within the white world operate in multiple directions, and each faction has a different ethnic or national candidate to exclude from the struggle and from a future White Union. There are Germanophobes, Italophobes, and Anglophobes, among others; but we can summarize it by saying that the main sectors are the anti-North American, anti-Slavic, anti-Mediterranean, and anti-Latin American ones. Needless to say, we are not talking here about laughable conservative concepts such as “castizo futurism” or its Nazbol version, with a Eurasianist White-Mongoloid hybrid nationalism, but only about divisive and exclusionary tendencies against whites living in these areas of the world.

Thus, some Europeans think that Americans should be removed from the Revolution and limit the latter to a struggle for the European continent, the European continent and Russia, or even Eurasia — or the European continent plus Islam, and other, even more bizarre combinations. If many “patriotic” movements in Europe are anti-American, it is basically due to US interventionism and the whole series of unjust wars that the Lobby — that is to say, Jewry — has pushed the country to engage in for its exclusive advantage, especially in the Middle East. This has been an interventionism that has broken with the isolationist approach that the United States traditionally maintained with respect to the rest of the world, as well as with the friendly reciprocal relations that the US and the Arab had enjoyed until the creation of the Zionist State. Submitting to the Jews that has been seriously damaging the interests of the US as a country ever since it drove the Arab countries into the arms of the Soviet Union, alienating the US in the process along with half the world, including a multitude of its oil suppliers and former strategic allies.

There are no geopolitical reasons or any other interests linking the destiny of the US to that of Israel, but only the need for American politicians to win the support — or at least the approval — of the all-powerful Jewish media empire in the US in order to get elected. This dependence alone creates the aforementioned subordination of the US to the interests of Jewry. But the important thing is that the interests of the American people and those of Jewry do not coincide, any more than those of a colony coincide with those of its metropolis. It is an unnatural “alliance,” — a relatively recent one, and one that, a fortiori, will not last much longer.

There is of course no doubt that posing oneself as anti-American is a very politically correct attitude that arouses broad sympathy across the Old Continent, but noticing the Jewish domination over that America to which they attribute so many wrongs is far from being so. And that is why anti-Americans will never be able to make an accurate analysis of political reality, for they prefer to ignore the fact that most American White Nationalists hate their government in Washington, DC even more than they do.

Also, there are those who are anti-Russian, or anti-Slavs in general, either for ethnic or political reasons. Among them are mainly the opponents of former Soviet Communism, since the white peoples who lived (or survived, one might say) under the Marxist regime in the past were mainly Slavs. This anti-Russian/anti-Slavic type has declined greatly in numbers since the fall of the Soviet bloc, as is to be expected, although there are still too many of them left. In the US, we are once again faced with the old and fallacious habit of identifying the executioners with the martyrs; that is, confusing the supporters — of Communism, in this case — with the peoples who in reality constituted the bulk of its victims. As victims of the misery and famines brought about by the Marxist economy, and used as cannon fodder for Soviet expansionist imperialism and slave labor for its gulags, these peoples paid for their disaffection with the regime with tens of millions of deaths.

Some others, on the other hand, think that the Aryans to be excluded should be the Mediterranean Europeans. The supporters of this idea are frequently people who have not even checked in situ whether the mental vision they have created of the inhabitants of these regions is correct, or else they are pseudo-pagan Nordicists who believe in the mythical and remote origins of their favorite sub-race in Atlantis or some Ultima Thule. This stems in lage part from the erroneous impression that sharing hair and eye pigmentation with other races implies the existence of some kind of late link with them as a result of miscegenation. Obviously, this is an unfounded belief. Significantly, no one claims that yellows are more closely related or interbred with blacks because they share the same iris or hair color.

The white race is very diverse in appearance: redheads with blue eyes, blondes with brown eyes, brunettes with green eyes, and so on. If among the wide phenotypic variety of our race there is a group in which dark eyes and dark hair predominate (the Mediterranean and even the Alpine), this does not mean that it is attributable to interbreeding with other racial groups. In fact, light eye colors are relatively recent mutations which appeared in the white race when it was already formed. For example, blue eyes did not exist until about 8,000 years ago. In the beginning, all whites had brown eyes. The same is true of blond hair, a mutation that occurred only 11,000 years ago. The white race, however, has existed for about 30,000 years or more. The Mediterranean is one of the five existing Aryan sub-races, together with the Nordic, Alpine, Dinaric, and Eastern Baltic.

Let’s keep in mind that, to a large extent, the myth of Nordic exclusivism — or of Mediterranean exclusion — has been promoted precisely by those enemies of the white race who deliberately seek its division. We have all been taught from school that the Führer was fascinated with the “Nordic race” and that National Socialism only regarded this particular sub-race as the Aryan race. In fact, if you look in Adolf Hitler’s writings and speeches for this alleged Nordicist obsession, you will not find it.

This same strategy of division is intended to cause a feeling of exclusion from other whites among Latin America’s white community, as well as a disaffection towards them among the White Nationalists of North America and Europe. This anti-Latin American inclination is based on the (typically liberal) nonsense of believing that, by being born elsewhere, a race ceases to be itself.

We could also cite, as yet another example, the case of the micronationalism of some alleged White Nationalists who demand independence for regions such as Catalonia or the Basque Country, not hesitating to promote resentment against other brother peoples for the sake of such secessions, even if this does not entail any strategic advantage for the white struggle. The stateisms — that is to say, the nationalisms of the already constituted nation-states, sometimes in confrontation with other states as well for historical reasons, are another aspect of the same problem.

As we can see, the misgivings of these stupid anti-unionisms have their origin in two sources. The first is a distrust due to questions of an ideological nature; that is to say, because of the political regime prevailing in a specific territory, as in the case of the US or the USSR, without even considering whether or not such a regime was imposed on the population from outside (and, let us not be naive, a two-party mediocracy does not imply a ruling elite that is more in accordance with the popular will than any other type of dictatorial regime). The other is a contempt on the part of hyperdifferentialists that has its roots in ethnic issues; that is, because they believe that some white ethnicities and sub-races are not white enough.

There is a third source as well, which is sometimes a mixture of the other two, that is motivated by historical quarrels and controversies (past conflicts, a belief in different origins, imperialism, or religious wars or territorial disputes from times when decisions were made by monarchs and the people had little influence).

There are various anti-unionist factions, even opposing ones — each one with its least favorite group, about which they differ. But what they all agree on is to put the cart before the horse. We do not know what conditions of mobility there will be between the regions of the future White Union. We do not know for sure if a unitary, federal, or confederal model will finally be implemented. We do not even know which white ethnic groups will survive into the future, because some may not wake up in time. Now is therefore not the time to build the roof, but rather the foundations. The hour is too late to go around putting sticks in our wheels with hypertrophied puritanisms or artificial states’ chauvinisms.

In these times of crisis, we cannot afford to exclude fellow racial compatriots or blithely reject allies. Precisely having done so in the past has led us to our present situation. The Second World War was lost for this reason. And the future revolution that the white world needs to undergo in order to survive will fail if any of its parts are once again excluded, no matter where they may live.

It is worth remembering this because we are a race so intoxicated by the media that we do not even have a clear awareness of who we are anymore. In contrast, our enemies have a much clearer vision of our identity and their own. They know who they hate and who they are fighting. It is not a particular white ethnicity, but the race as a whole. They see clearly, with a deep perspective and without our blinders, that despite minor differences, we members of the white race are a unit. It does not matter to them whether a particular white country participated in “the” colonization or was instead colonized by them. It is not a historical, political, or ethnic question for them; they think in racial terms. Thus, if our thinking remains more fragmented and less cohesive than theirs, we will lose.

This is how we must think if we are to survive the genocide we are undergoing. As Kevin Strom (ADV 2020-06-20, On the Cusp) said, “We are targeted and marked for death as Whites. It is as Whites — not as dolichocephalic Red Nordids, or Paleo-Atlantids, or western Europeans only — that we must become awakened and fight back.”