The Most Important Idea for Us to Get Across 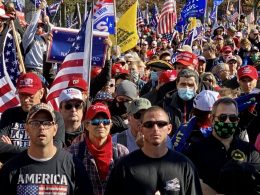 We are a small group of highly committed people with ambitious aims whose achievement will require the mobilization of great masses of our people. For this reason, the first thing to say about our battle of ideas is that it will have to be fought on more than one level. We have distinct audiences to reach. I have no doubt that there is still plenty of interesting work to be done at the highest theoretical level, but that is not our most pressing task.

To find out what is, we must ask what is preventing the great mass of white Trump voters from getting behind us — what is motivating them to go on supporting the Republican Party in preference to people who could actually get them out of the dangerous situation they are in. In part, it is a matter of sheer ignorance. Many, perhaps most, of our potential constituents have simply never heard of Counter-Currents or American Renaissance or The Occidental Observer even after all the years of work we have put in. Of course, it is hard for us to be heard above the din made by the dominant ideology, or even by its officially permitted so-called conservative opposition. But this is not the whole problem, either.

The disproportion of resources between ourselves and the other side is so great that our potential supporters are likely to hear of us at first not directly, but via our enemies’ attacks upon us. They will hear what the other side’s patented “extremism” experts say we say — long before they actually hear what we have to say.

Here’s a recent example: Andrew Torba, founder of the free-speech Twitter alternative Gab, discovered that the top two results of a Google search on his name were both an Anti-Defamation League (ADL) attack upon him. In the top spot was an ad for which the ADL had paid Google; in the second was the exact same page supposedly dished up independently by Google’s own algorithm. This is what wealthy organizations can do when they go up against a guy struggling to run a website out of his home.

First impressions are often decisive, simply because the ordinary man does not have the time or sufficient motive to check their correctness. The other side is well aware of the enormous advantage they enjoy in being able to reach most people first, and if we want to understand the real battle of ideas in which we are engaged, we had better start by taking a close look at what they get to people first with.

Obviously, it is not statistics showing that the races of mankind all have identical crime rates or IQ scores, after all. It’s not careful sociological studies demonstrating that Jews exercise little influence over American society. No such information exists to counter the information we are presenting. In other words, they know they cannot beat us by doing what we do better than we do it.

Instead, what they hit people with is emotional and moral manipulation, bristling with suggestive but content-free words like “hate” and “extremism” — crude stuff, but well-adapted for the modest ends in view, namely biasing the minds of ordinary but poorly-informed people with little obvious incentive to invest time and effort in inquiring farther. Clearly, no rational argument is airtight enough, and no empirical study thorough enough, to counter such strategically-placed manipulation.

Nor would it be very effective for us to do precisely what they do, such as for example by trying to argue that the other side are the real haters, even if that happens to be true. (I absolutely believe it is; there is a good deal of psychological projection involved in anti-white rhetoric.)

If we study the ordinary white Trump voter to see what is preventing him from supporting those who would actually do something for him, we find that where it is not merely a lack of information; it is likely to be a matter of moral misgivings. Pro-white organizations sound to the average white person as if they would involve unfairness to other groups, which certainly do have their own legitimate interests to defend as well.

The first thing I would point out to such a prospective supporter is that whites seem to be the only race which faces a hurdle of this kind. Other groups organize to advance their own interests without a second thought, as if it were the only natural thing to do. If you convince most non-whites that something is in their group’s interests, they are likely to support it without asking too many questions about its effects on others.

The German philosopher Immanuel Kant believed that a leading source of moral evil in the world was man’s tendency to make exceptions in his own favor. For example, the common thief is not a principled Communist opposed to all property rights. He, no less than the person he robs, wants his own property to remain secure. He merely wants to exempt himself from the general duty to respect property. The promise-breaker does not want to abolish the custom of making promises; otherwise, he could gain no advantage from the trust of others. He just wants the freedom to break his own promises.

In our own time, the Jewish academic philosopher Michael Levin, in his book Why Race Matters, has suggested that Europeans are uniquely high in a trait he calls, for the sake of brevity, Kantianism. He is referring to this conscientiousness about not making exceptions in one’s own favor. He even cites some empirical evidence to show that Europeans are the most Kantian race: more disposed this way than other peoples. And if that is true, as I suspect it is, it seems to me the likeliest explanation of why so many whites hesitate to take their own side in a dispute. All the propaganda about white advocacy being equivalent to “hate” could probably not even gain a purchase on the minds of our people if it were not for this unusual moral sensitivity.

The average white man has scruples about taking his own side in a sense very close to the technical meaning of “scruples” in Christian moral theology, namely believing something is a sin when it isn’t. He thinks expressing racial solidarity would necessarily involve an injustice toward other races when in fact it does not. We have never advocated for anything we have not been willing to grant reciprocally to others.

Once our potential supporter has overcome such scruples, it will not be hard to show him what is the likely outcome of a competition in which every group seeks its own advantage — except one, which tries to benefit everyone equally. Obviously, the universal-minded group will be taken advantage of by all the others. At that point, America’s current racial situation suddenly becomes easy to understand — and I suspect that ears will also open quickly to hear our already strong empirical arguments concerning race and the Jewish question.

» The Populist Moment, Chapter 4, Part 1:
What Is Populism?