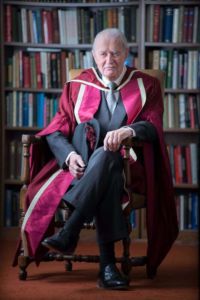 In the words of our host,

Roger Pearson is a throwback to an era when it was more common to find European men who were strong, adventurous, cultured, courageous, and unapologetically race-conscious. Now 95, for over seven decades he has been fighting the good fight against the West’s cultural and demographic suicide. We would like to honor his valiant and productive life.

We were gathered to grant Dr. Pearson a lifetime achievement award for his many decades of leadership and courage in defending Western Civilization and our race. Accepting the award at nearly 95 years of age, Dr. Pearson opened his remarks with a smile, saying, “I remember being taken to meet my great-grandmother when she was 99. She didn’t make 100, but I intend to beat her at that.”

In nearly a century of service, Dr. Pearson volunteered in the British Indian Army, served as Chairman of the World Anti-Communist League and President of University Professors for Academic Order, published Mankind Quarterly, and traveled the world.

His interest in the subject of race began in India and Pakistan, where he was a successful Chief Executive Officer of many tea companies. When he came to America, much to the dismay of the employees who loved him, he transitioned into academia. In California, he met Willis Carto and published the racial studies journal Western Destiny for a time.

Dr. Pearson didn’t stay in California, however. He moved east to establish the Department of Anthropology at the University of Southern Mississippi. After quick recognition for his diligence and intellect, Dr. Pearson was noticed by Harry Weyher of the Pioneer Fund. With the help of a few grants, it was time for him to move to Washington, DC.

His service as Chairman of the World Anti-Communist League earned him a signed letter from then-President Ronald Reagan for “promoting and upholding those ideals and principles that we value at home and abroad . . . bringing to a wide audience the work of leading scholars who are supportive of a free enterprise economy, a firm and consistent foreign policy and a strong national defense.”

Dr. Pearson wrote two textbooks on anthropology, among other works, such as Race, Intelligence and Bias in Academe. Those guests who had copies were delighted to have his autograph. Other young men and women who attended were just learning about Dr. Pearson’s accomplishments for the first time.

Like Counter-Currents, the Free Expression Foundation works hard to honor and recognize the fighters for Western Civilization. Earlier that afternoon, our host opened with a tribute and moment of silence for the unexpected passing of our dear friend and colleague Martin Christopher Rojas, known best as Chris Roberts, Director of Special Projects at American Renaissance, and as Hubert Collins to Counter-Currents readers. (Our sorrow can’t be expressed better than Jared Taylor’s tribute here at American Renaissance.)

The news had arrived the previous day and impressed upon us how meaningful and necessary it is to commemorate both those who have passed and those who are still with us. We are each the product of millennia of the voluntary eugenic selection of our parents, their parents, and the shared ancestors of our race, and we have a duty to honor them.

There were guests and leaders from a distinguished cross-section of the movement for white identity politics at the event, and Dr. Pearson’s fascinating and accomplished life is an inspiration to all of us. Nothing summarized this better than his own concluding statement: “I’m certainly proud of what I’ve tried to do for the sake of my family and race. I’ve devoted my life to that.”

If you or your organization would like to sponsor an event such as this one, please contact me at [email protected]. Events are a way to build community, share knowledge, and commemorate the accomplishments of our heroes. All of this is made possible only through your generosity. We are now planning events in five other states and in Europe. Please consider making a gift toward our next event below. Thank you!