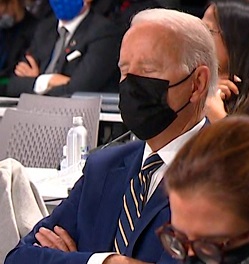 President Joe Biden seems powerless to do anything about . . . well, anything at the moment. He promised to change election laws to “save democracy” (read: give his party permanent political power), and he can’t do it. He vowed to fix immigration, but the problem only grows worse. He pledged to make America’s geopolitical opponents respect us, but they are doing the opposite. He said he would end COVID, but everyone is still in masks and hysteria continues to reign.

His presidency now sits in stagnation. Biden appeared eager to be an authoritarian President in the mold of FDR. He issued sweeping executive orders and even ignored court precedent to press for his agenda. But now he looks like an impotent President slipping off into senility. There’s no one in charge at the top.

Let’s go over the big issues one by one. First, COVID.

Biden won the presidency in large part due to hysteria surrounding Donald Trump’s handling of the pandemic. It was believed that a “competent” liberal could tackle the virus and return life to normal. In Biden’s first few months, he appeared ready to declare victory over COVID. People were getting vaccinated, so there would be no more need for masks and lockdowns. But then the vaccine turned out not prevent infection, so masks and lockdowns are back. Thus, COVID hysteria is as strong as ever and there’s no sign of an end to it. Seeing tens of thousands of schoolkids forced to wear masks — vaccinated or not — is a sure sign normality hasn’t returned.

Biden is now trying to combine downplaying COVID with further punishments for the unvaccinated. Yet, his vax mandate — which was the crown of his COVID strategy — was struck down by the Supreme Court. Now all he can do is hope he can persuade his own political allies to live their lives and stop being afraid of the virus. That’s a tall order, considering his own side remains firmly double-masked and unwilling to leave their homes.

Biden can no longer declare victory over COVID thanks to the conservative makeup of the Supreme Court, and nature itself. There’s nothing he can do about this situation.

On immigration, Biden wants to seem like he’s got the matter under control. But there’s no sign the migrant surge will cease. Over 180,000 illegals were apprehended at the border in December. It’s estimated that over three million illegals came through the border last year. Biden is doing nothing about this — besides having his deputies insist they will not deport illegals unless they commit a very serious crime. Illegals get a free pass to come and go as they please.

Biden cannot get anything on immigration through Congress. His Democratic allies have tried repeatedly to pass some form of amnesty, to no avail, as the Republicans refuse to back their legalization efforts. Even the plan to skirt around Republican roadblocks fell through in the failure of the Build Back Better bill.

Biden also can’t please his progressive allies, in spite of his no-enforcement policy. His administration has reluctantly retained basic enforcement measures that accelerated some deportations. The current government was also forced by the courts to keep phony asylum-seekers in Mexico while their applications are processed. The Biden administration also no longer wants to compensate illegal immigrants who were separated from their families while detained under Trump. Biden promised to do so in public statements, but the public backlash must have convinced him this was a bad idea. Two-thirds of America said they strongly disapproved of payouts to illegals. Biden decided it was wiser to listen to his constituents instead of Left-wing activists.

This situation doesn’t satisfy either side, but Biden can’t do anything but allow the migrant hordes to keep pouring through and hope they go away.

Knowing his party is in trouble in the midterms, the President has tried to push Congress to pass “voting rights” legislation that would give his party a permanent political majority. The various bills they’ve tried to pass would ban voter IDs, expand ballot harvesting, give felons the right to vote, empower liberal bureaucrats to control election laws, and numerous other terrible ideas. These bills have all failed in the Senate. Biden hoped he could pressure enough Republicans to vote for it by calling them racists if they didn’t support it. That didn’t work, so he then hoped Democrats would vote to remove the filibuster so they could pass these bills with a simple majority; no Republican votes needed. Moderate Democrats voted against this idea.

The President is not only failing on the domestic front. He also can’t resolve the crisis in Ukraine. Russian troops are massed on Ukraine’s borders. It appears this is being done as a negotiating tactic to pressure the West into concessions, but the West won’t give any. That may motivate Russia to actually invade Ukraine. The Biden administration is vowing severe economic retaliation if Russian troops step foot into the breadbasket of Europe, but key European allies don’t want to follow along. Germany, which is dependent on Russia for its energy supply, isn’t eager to sanction Russia. The greatest European power wants to play nice with Russia and make concessions. America and Ukraine don’t.

Biden has no power over the situation. He knows he can’t start an unpopular war over a country Americans don’t care about, but he also can’t give anything to Russia without seeming weak and alienating Ukraine. But he really can’t do anything if Russia invades except impose more economic sanctions. And if Germany doesn’t agree to them, they may prove useless, anyway.

Biden promised to increase respect for America on the world stage, but nobody looks at us with any respect; certainly not Russia or China. America can no longer project the kind of power it could just a few years ago, and Senile Joe isn’t capable of reviving it.

A lot of these failures are due to Biden himself. He’s an old man who doesn’t know where he is, cusses out reporters over minor annoyances, and seems ignorant of basic policy. Moreover, he can’t sell his agenda to the American public anymore. At the start of his term, he had that power thanks to the Dear Leader-esque media coverage he received during his first months in office. But the honeymoon is over. Ordinary Americans are fed up with inflation, rising crime, open borders, and never-ending COVID hysteria. They don’t want a war over Ukraine; they just want their kids to go to school in peace.

Biden still has the power to wage a war on “white terror” and make life miserable for any white American who dares question the system. He can’t achieve the wide-ranging changes he offered on the campaign trail, however. He’s just a lame-duck President, and this will only grow more apparent if Republicans take over Congress in November.

America is primed for a liberal authoritarian to take charge and turn the nation into an even worse dystopia, but Biden simply isn’t that person.