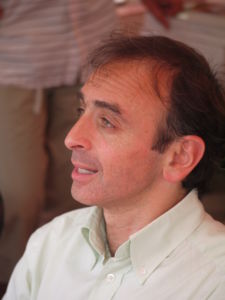 Éric Zemmour has announced his candidacy for the presidency of France. The next great Dissident Right debate is upon us, and there is no way to win.

It basically comes down to this: If you support Zemmour, you can count on being called a “Jew lover” from now until eternity and expect to see your endorsements screenshotted into infinity. If you oppose Zemmour, you are going to look like the most petulant, stubbornly impractical purity-spiraler.

For all these years, we have fantasized about the day when a candidate from a major Western nation with wide name recognition and a strong grassroots base of support would come along and make the Great Replacement and anti-white racism their primary issues. Well, now that day has arrived, and the son of a bitch is a Jew.

It does feel as if an almighty being is playing some kind of cruel joke on us that we find ourselves in this position.

This is not to say that being Jewish is not a perfectly valid reason to oppose a politician. But in Zemmour’s case, it’s literally the only reason to oppose him. If he were a gentile, it would be a complete no-brainer.

Headlines in the Anglosphere are comparing Zemmour to Trump, probably for clickbait purposes. In reality, Zemmour has more in common with Patrick Buchanan. Like Buchanan, Zemmour became a household name as a television commentator on CNews (France’s equivalent of FOX News).

And like Buchanan, Zemmour’s talk show experience means he’s highly skilled and practiced at debating. A lot of the French Left are scared to go on his show. In April 2020, a video went viral of a migrant harassing and insulting Zemmour on the street as he was walking home from the grocery store. The perpetrator was later quoted as saying, “He is too strong in debate. What do you want to do except insult him?”

The fact that Zemmour is being called France’s Trump is significant given that four years ago, people were calling Marine Le Pen “France’s Trump” and she is still active in politics. Alas, Le Pen has spent the last four years cucking to the Left and punching to the Right in a counter-productive quest for any scrap of an electoral edge. In October, Le Pen said that she would be open to more immigration if employers said they needed it.

Le Pen’s relentless push to the center has created enough space for her to be outflanked on her Right. As recently as a couple of weeks ago, polls were showing Zemmour as being nearly even with Le Pen. While it is doubtful that Zemmour could actually become President, getting into a second-round runoff with current President Emmanuel Macron is not beyond the realm of possibility. Even if Zemmour were to lose the second round, merely having him in the race will force the Left to argue for the Great Replacement. Jew or not, the effect this could have on the Overton window is potentially game-changing. It’s an offer almost too good to refuse, especially when we might not get another such opportunity for a while.

At the same time, Zemmour doing well and becoming the face of the Great Replacement debate might also set back discussion of the Jewish Question by years. Sick sense of humor, indeed.

Surely Zemmour must be controlled opposition, right? He has a fair bit of racist street cred. He has been charged with hate speech and inciting racial hatred nearly a dozen times. If he is secretly working for the establishment, the establishment has a funny way of showing their appreciation.

To me, Zemmour sounds as if he has been sounding more radical than necessary if he were controlled opposition. Take this quote from May 2020 on France’s Muslim no-go areas:

I think we reconquer by force. Moreover, in order to reconquer, there’s a problem of the number of people. You think — you are more humanist than I am — you think that we can bring people around by means of education. That’s something I don’t believe anymore. I think that from a certain number — you know, it is the sentence from Hegel that I say all the time — the quantity becomes a quality. So in this case, it is necessary to reconquer by force or give up.

All right, so Zemmour is not a fanatical anti-white Jew — but he must surely be a radical secular Jew! Actually, not really. Not only is Zemmour anti-anti-white, but he is also anti-anti-Catholic. In his speeches, he talks about keeping France Catholic. Zemmour has stated that the French character is a mix of Catholic-inspired social hierarchy and the traditions of Roman law.

Consider this passage from Zemmour’s 2019 speech at the Convention de la Droite:

On one side we have liberals and the market, which have opened our country to the winds of globalized free trading, destroying borders and small businesses and transforming our citizens into individualists, almost hysterical consumers in thrall to the edicts of advertising and big business. On the other side we have the far Left, who have swapped their Marxism and class warfare for the sacred cause of minorities, whether they be sexual of ethnic, and who have replaced the streets and the barricade with the courtroom.

The judges, conditioned by Left-wing propaganda at magistrate schools, have become an instrument, and often an accomplice, of various organizations for whom they serve as an armed wing, to racketeer the dissidents and terrorize the majority who were previously silent and are now paralyzed. All those who felt constrained by the previous society governed by Catholicism and the civil code, all those who were promised liberation and believed it: women, the young, homosexuals, people with dark skin, Jews, Protestants, atheists, all those who felt they were an unwelcome minority within the male, white, heterosexual, Catholic majority and who tore down the statue to the jerky rhythm of Mick Jagger’s swaying hips.

It’s first of all noteworthy that Zemmour identified Jews as being part of the problem — although not the problem. Secondly, Zemmour promotes Catholicism as the true and rightful culture of France. While he is not Catholic himself, he acknowledges the cultural hierarchy.

In Zemmour’s defense, he’s a Sephardic Jew, not an Ashkenazi. Sephardi aren’t the Jews who run the banks; they’re the Jews ran the slave trade. If nothing else, he comes from a line of Jews who have experience transporting blacks from one continent to another against their will. Thus, if he is serious about stopping white genocide, maybe some of that epigenetic knowledge will be useful.

There are of course some personal issues with Zemmour. Rumors have swept France recently that he may have knocked up his young mistress/political strategist. Yeah, that’s naughty, but this is France we are talking about. In France, having a young mistress is virtually a job requirement to be President. I’m pretty certain it’s in their constitution.

In the interests of fairness, or in case anyone thinks I’m going too easy on Zemmour, I will now grant equal time to the anti-Zemmour case. For this, we’ll hear from Captain Harlock of Democratie-Participative, aka “the French Daily Stormer”:

Zemmour is a Jew for whom the world revolves around Jews. This is not exceptional; all Jews think so. Zemmour projects his rabbinic Semitism on France as Bernard-Henri Lévy projects his cosmopolitanism on France, the dividing line between the two being their divergence as to the best tribal strategy to adopt to secure the interests of the Jewish race in France.

The goyim make much of these recent feuds between prominent Jews. It is because they do not know anything about the Jews. These intra-community clashes are permanent, in France as in Israel, and bring Jewish factions into conflict on points of detail. If they are currently spilling over into the public square, it is because Zemmour’s line corresponds to an internal struggle between the Jewish establishment in power in France since 1945 and the supporters of Likud. . . .

In the event of Zemmour’s victory, all these Jews know that the Muslims will be unleashed against them and that the current precarious balance will be shattered. However, the whole Jewish racial strategy until now has consisted of fueling Arab rage against whites through their anti-racist media and associations. This policy ended up falling on the heads of these Hebrews, and the Jews united around Zemmour replied to their fellows in the CRIF [Representative Council of French Jewish Institutions] and LICRA [International League Against Racism and Anti-Semitism] that a lack of change in strategy would only strengthen the Muslims over time. At no time in this equation does the fate of the whites cross the minds of these Jews who, moreover, all eat at each other’s homes on Saturdays.

The way I see it, we’re in serious “beggars can’t be choosers” territory. The drawbacks of a Zemmour candidacy — that it would muddy the waters when discussing the JQ and that we’ll spend the next 20 years explaining why Zemmour is exception to the rule — would only matter if he performed well, in which case it would also come with a lot of positive results, such as the normalization of many other dangerous topics. If he does poorly, however, then we’re no worse off than we are now.

In looking at it from a cost/benefit perspective, I think supporting Zemmour is worth the gamble. If nothing else, it will be destabilizing and could create opportunities.