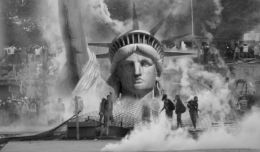 Historically, when an authoritarian regime takes power, the written law tends to cease to be representative of real-life interaction with the state. I am reminded of Aleksandr Solzhenitsyn’s tales of the Gulag system, where he had no rights and was brutally tortured only to find out years later after his stint that on paper, he supposedly had had a multitude of prisoner’s rights — including the right to know his rights.

Of course, what is written and what is truth are not necessarily one and the same. We face a similar situation today. The institutions we once viewed as legitimate have been kidnapped, raped, and skinned. The current regime is dancing and wearing the skin of the previous institutions like a body suit as we speak. Among the most important of these institutions that has become a shell of what it once was is the very Constitution which the government claims as the basis of its legitimacy. And sadly, adherence to the founding document is not even the regime’s most despicable lie.

Some ideas should be cleansed from the mind of any group the regime targets that wishes to survive to see the day at which the inconsistencies and incompetency catch up to our moronic, pathocratic overlords. The most important thing that should be realized is that you — yes, you — have no rights. If you fit into the following categories: a) White, b) right leaning, or c) all of the above, you should operate under the assumption that your right to free speech, firearms, not to be destroyed by the corrupt courts, and so on is now a complete fabrication. The enemy excels at finding post hoc rationalizations for abolishing our rights.

The right to a speedy trial and reasonable bail are black letter constitutional law. Nevertheless, the judiciary used Covid as a flimsy excuse to deny the white Charlottesville defendants a speedy trial; it has been over four years now. The exorbitant sums that January 6 defendants have had to put up for bail while murderers, rapists, and foreign invaders are allowed to waltz out without posting a single cent should erase any doubts about the reign of anarcho-tyranny. The government is an active, self-avowed enemy of white Americans and a hair-trigger from accusing anyone they wish of terrorism. The military and intelligence agencies are currently preparing to kill Americans. Yet, some are still under the impression that Officer Bag O’Doughnuts will think twice about giving you the ol’ Daren Wilson if you don’t put on the cuck muzzle — or worse. That Australia’s anti-social cops went not merely reluctantly but enthusiastically along with their government’s war of terror against their own people should make this crystal clear.

We can derive a few lessons from all of this.

Lesson #1: Your “rights” can be taken away at any time

Not only have Americans lost their rights, but there are new rules which are of greater hazard to the average American. The first is that there is a new, stringent caste system that must be followed based on the intersectional “progressive stack.” This caste system is based on race, sexual deviancy, religion, and sexual delusions. Imagine the caste system that the Left imagines exists in the United States today, and flip it upside down: That’s the new caste system. “They don’t want equality, they want revenge” never rang so true.

This leads into a multitude of new sub-laws, one of them being the abolition of the eternal, natural right of self-defense. For decades, the Satanic elites have wanted to disarm their serfs, but to no avail. Then a solution arose. Why abolish firearms when you can do something even more evil: prevent people from legally using said weaponry for its intended purpose. It has become apparent that whites are no longer permitted to use their firearms, lest they spin the wheel in a game of “Will I go to prison forever for blasting an armed black burglar?” Two slots for prison, seven slots for BLM outside your house demanding “just-us,” and one slot for “Scott Free.” No thanks, Tyrone; take the Rolex.

Lesson #3: Self-defense is no longer a universal right

The traditional reaction of the populist and Dissident Right to these abominable breaches of human decency — at least by white standards — is to advocate for taking control of the government, increasing its power, and using it in the short term for our own devices. The Left will increase in size with or without us, anyway, so we might as well get on the bandwagon and squeeze out what little we can. However, as was demonstrated with the Trump presidency, this simply doesn’t work. Without a metapolitical framework and base to build upon, it is all merely hot fumes. Trump was the closest thing that we will ever have to that ideal in the present age. Biden and his successors have and will only continue to exacerbate our inability to fight back through the political system.

These are only some of the new unwritten rules and regulations that we have today and will continue to have until something can be done about it. Many more could be listed, though it would be tedious. The main takeaway, however, is simply that your rights are a joke and the new rules are based on an ethno-religio-sexual caste system in which you, dear reader, are the untouchable dalit. In my opinion, the only solutions – apart from Greg Johnson’s idea of building a metapolitic, which has always been the most prescient short-term goal — are to push for white identity, as well as conservative identity, as a separate ethnic group from city liberals and their foreign hordes, a weakened national government (especially the security apparatus and federal secret police), and the devolution of state and local governments, with the end goal of secession, balkanization, or peaceful separation.

Until we are rid of the federal and corporate anarcho-tyranny, we will be unable to live at peace with such unwritten legislation, which has the express intention of soft-genociding the native population via white flight — be it from urban areas or the entire country itself, imprisonment and harassment, allowing predator populations to run free, the destruction of white and conservative habitats via invasive population insertion, and anti-white family incentives.

Know the rules, don’t get yourself into bad situations, and stay safe out there.