White Americans are the System’s Number One Enemy 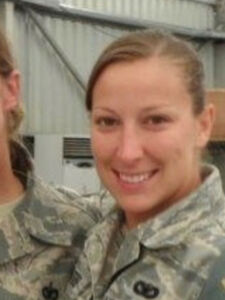 Ashli Babbitt, who was shot to death while unarmed in the US Capitol on January 6, probably had no idea when she joined the US Air Force in response to the 9/11 attacks that 20 years later she would be described as equivalent to the hijackers by her own Commander-in-Chief.

George W. Bush makes great fodder for Counter-Currents articles. Any time he makes a public pronouncement, it’s worth writing about. We last saw him condemning “White Anglo-Saxon Protestantism” as un-American back in May. Last weekend, he condemned his own voting base as equivalent to the 9/11 hijackers.

Bush spoke at a 9/11 commemoration ceremony in Shanksville, Pennsylvania last weekend. In the speech, he repeated the lies about the “white supremacist” terror threat — without actually using the term:

We have seen growing evidence that the dangers to our country can come not only across borders but from violence that gathers within. There’s little cultural overlap between violent extremists abroad and violent extremists at home. But in their disdain for pluralism, in their disregard of human life, in their determination to defile national symbols, they are children of the same foul spirit, and it is our continuing duty to confront them.

At a time when religious bigotry might have flowed freely, I saw Americans reject prejudice and embrace people of Muslim faith. That is the nation I know. At a time when nativism could have stirred hatred and violence against people perceived as outsiders, I saw Americans reaffirm their welcome to immigrants and refugees. That is the nation I know.

The message from Bush: “White Americans, not Muslims, are our real enemy. You should also praise me for resisting nativism and welcoming the people who did 9/11.”

Bush’s speech was loved by his former detractors and hated by his former supporters. The ex-President probably knew this would be the reaction and wanted it. He didn’t care that many of the people he denigrated were the very same people who had fought in his stupid wars. Ashli Babbitt signed up for military service right after 9/11 at age 17. For the crime of crawling through a window, she’s now the same “foul” person as the 9/11 hijackers.

Bush’s speech is a good reminder that the elites haven’t forgotten who they really hate and fear following the Afghan debacle. Many people warned that the Taliban takeover would spur a growth in Islamic terrorism and that we could soon face a serious attack. This was a popular stance among President Biden’s critics. Bush was one of Biden’s critics and opposed the withdrawal even before it turned into a disaster in August. Like most liberals, Dubya lamented how women’s rights would suffer without American troops to enforce liberal values. It’s unlikely that most of the troops who fought and died there did so in the belief that they were fighting for NGO-run girls’ schools. But Bush believes that’s all their service amounted to.

The cries and lamentations about Afghanistan still pale in comparison to the anguish over homegrown terrorists. Bush didn’t bother making veiled references to how a Taliban-controlled Afghanistan will lead to more terrorism. That’s only a problem because the new government doesn’t respect women’s rights. The real threat is right at home; CNN told Bush so.

This is the standard regime position, and Afghanistan hasn’t changed that. FBI director Christopher Wray made sure that his 9/11 op-ed in the Washington Post emphasized that “domestic terrorists” are the real problem now:

Wray laments the loss of a common purpose after 9/11, and says America needs to revive that in the face of “domestic terror.” Countering this alleged threat requires gleichschaltung from the American people, according to the FBI director:

As we learned after 9/11, collaboration is essential. Increasingly, that means law enforcement partnering with private citizens and companies. Interrupting fast-moving threats such as lone actors requires individuals to share information with the authorities when something seems amiss. Countering sophisticated cyberattacks requires companies to work with the FBI and not go it alone. Developing such relationships necessitates a joint commitment to building trust and improving communication.

The effects of this focus are already playing out in the real world. Fencing went up around the Capitol again in response to a peaceful rally scheduled to protest the barbaric treatment of the January 6 demonstrators. This will now be a regular occurrence any time a conservative protest takes place in the nation’s capital. No precaution is too great to counter this terrifying menace.

The threat from alleged terrorists even justifies outright treason. Reports surfaced this week that General Mark Milley, Chairman of the Joint Chiefs of Staff, was secretly in contact with Chinese military officials during the latter days of Trump’s term. The purpose of this communication was allegedly to prevent Donald Trump from unilaterally declaring war against China — a distinctly unlikely possibility, yet one that Milley apparently felt was a real one. The General claims it was up to him to assure the Chinese that the American military would not go along with this (imaginary) threat.

Compare Milley’s views on China with that of ordinary Trump supporters. He told his subordinates that Trump supporters were the enemy. They were brownshirts following Trump’s Hitler-like Gospel. Lethal force was implied as the ultimate solution to thwart these thugs. Meanwhile, China, a hostile power that has the ability to devastate America in a nuclear strike, is viewed by the establishment as an ally of American democracy. No one is talking about allying with China against Islamic terrorists, however. In fact, we’re suspected of supporting Islamic terrorism against China.

The regime outlined its terror concerns over the summer. In a memo released in June, the Biden administration said the “most persistent and lethal threats” are “racially or ethnically motivated violent extremists (principally those who promote the superiority of the white race) and militia violent extremists.” The memo entirely ignored Islamic extremists, and only contained one ambiguous reference to Antifa.

The memo shared Wray’s enthusiasm for gleichschaltung and called for greater censorship and control over the public space. It also demanded a purge of wrongthinkers from the military and government, as well as terrorist classification for the “worst” offenders. This is the same government that allowed an open radical Islamist to hold a high rank in the US military. This radical went on to kill 13 soldiers in 2009 in the name of jihad. Maybe if he had tweeted about the Great Replacement, officials would’ve paid more attention to him.

The fact is that the regime doesn’t care about Islamic terrorism anymore. It’s unlikely that even new attacks will change this. It’s more suitable for their interests to consider white Americans as the enemy. They don’t have to make any concessions to the religion of peace for whites, or restrain their hatred in any way. They can unleash their full fury on white Americans because no one wants to defend them, even if they still make up the majority of the country. And a program of oppression targeted at whites aids their mission of attaining total control. They can impose hate speech controls and more brainwashing if they convince the people that  there’s some huge white supremacist threat.

The enemy is no longer a cave-dwelling jihadist overseas. According to George W. Bush, it’s you and me.