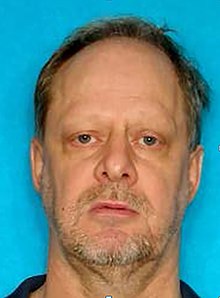 I’m not really a conspiracy guy, although I’m not anti-conspiracy theory as a matter of principle. Conspiracies do happen, and the theories can be fun. I’ll watch some conspiracy theory videos as entertainment, and there are a few I believe probably have some merit to them. But in general, conspiracy theories are just not something I feel like devoting a significant amount of mental energy towards. With so many of them, it’s like debating the existence of God: you are never going to know with 100% certainty. We will never know the full story about what happened to JFK. We will never know the full story on 9/11. No matter how much evidence you have, there will always be loose ends and missing pieces to the puzzle, and the guilty parties are never going to confess.

But every once in a while I will stumble upon one that really piques my interest. There was one that arose right after the Las Vegas shooting in 2017 that I have never forgotten. There were a million conspiracy theories flying around after that, and while a handful of them were debunked (like the flashing light in the fourth-story window, or how the shooter, Stephen Paddock, never could have gotten all those guns up to his room), some of have not. Watching the videos, it did sound like there was more than one gun being fired. Paddock’s girlfriend skipping off to the Philippines just beforehand was also ultra-shady.

It likewise doesn’t help that the police have refused to provide many details. We have never been given Paddock’s motive. Everything about the shooting smelled rotten, and the police response had all the signs of a coverup. We know there are things they are not telling us.

One of the theories that flew relatively under the radar is of particular interest to the Dissident Right because it connected the Las Vegas shooting to Charlottesville, which had happened just six weeks before. Now that the fourth anniversary of Charlottesville recently passed, it got me thinking about it again.

Charlottesville happened on August 12, 2017. We all know what took place, so I won’t go over the details other than to say that the most memorable thing that happened was James Fields plowing his car into a crowd of Antifa. That really fucked things up for us. Forevermore, that event became known as “the deadly Unite the Right rally.”

But here’s the deal with this 4chan post. This mysterious stranger did not just declare that the James Field “car attack” had been an op. He then proceeded to accurately predict the next op.

Guys I don’t have long but please take my message seriously. This car crash yesterday was planned in advance. I just want all of you to know that another event will be taking place soon in Henderson Nevada. All I can say about Henderson is don’t go to any rallies or parades or public outdoor events. 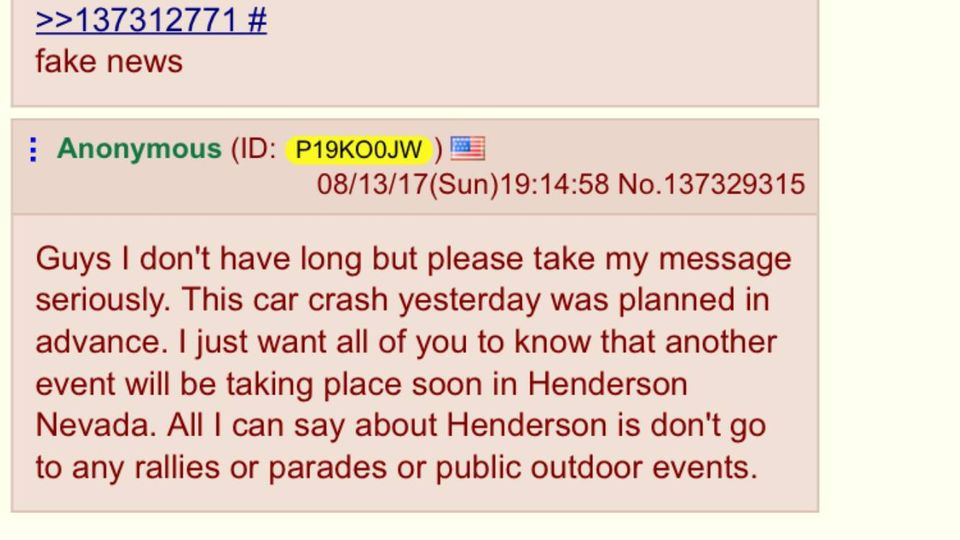 True, the shooting happened in Las Vegas, not Henderson, but Henderson is right outside of Las Vegas, and Stephen Paddock lived in Henderson. You might be thinking, “Okay, lucky guess.”

But wait. It gets weirder.

On September 11, 2017, four weeks after that last post and three weeks before the Las Vegas shooting, someone dropped a series of messages on 4chan. Again, they predicted a mass-casualty event in Nevada, but this time they specified either “Las Vegas or Henderson” (archive link here):

look i feel bad for some of you on this website. so i’ll let you in on a little secret. if you live in las vegas or henderson stay inside tomorrow. don’t go anywhere where there are large groups of people. also if you see three blacks vans parked next to each other immediately leave the area. you’re welcome

just stay away. go to arizona if you can. they won’t bother you in arizona.

to clarify i won’t be doing anything to harm anyone. i’m not a killer and i never will be one.

it’s called the “high incident project”. they want to make the american public think that places with extremely high security aren’t safe. they are trying to create more regulations. you will see laws proposed within the next few years to put up more metal detectors and other security devices. media and politicians will be saying places with lots of police need even more police. i can’t guarantee anything will happen tomorrow but las vegas is on their minds.

if their plan is successful state of nevada will pass a law in the future making all casinos have mandatory metal detectors and backscatter machines. soon after a federal law will be passed to put these machines in universities, high schools, federal buildings, you name it. osi systems and chertoff are the main producers of these machines. sometime around 2020 chertoff and osi will merge into a single company. after they merge the owners will sell off all their stock and make billions in profit. mr chertoff has been in contact with sheldon adelson. mr adelson will become a huge sponsor of these machines and he will be the first to put them in his casinos when the law passes. this is my last message for now. don’t expect me to return anytime soon

If your tinfoil hat wasn’t on after that first post, it probably is now. You should at least be considering taking it out.

Of course, there is still room for skepticism. They mysterious poster claimed that the attack would be occurring the next day: September 12, 2017. The actual Las Vegas shooting occurred on October 1. Maybe the baddies were planning to do the attack on September 12 but postponed it for whatever reason. Maybe they postponed it because of the 4chan posts.

To determine that, we have to ask, “Were there any large events going on in Las Vegas on September 12, 2017?” Well, there was a WWE Smackdown event going on at the Thomas and Mack Center. That crowd would have been of a similar demographic to the Jason Aldean concert that got shot up on October 1. Rick Martin was also doing his residency at the Park Theater in the Monte Carlo Resort and Casino on that day. However, both the Thomas and Mack Center and the Park Theater are indoor venues.

Could they have been planning a Bataclan-style massacre? Maybe, but doubtful. The Bataclan required multiple shooters on a suicide mission, and an attack on the Center and the Park Theater would have involved shooting one’s way through security or to have had the weapons stashed inside. In other words, there is a lot that could have gone wrong with that plan.

There has also not been a merger between Chertoff and OSI, but then again, if there was supposed to be one, it might have been derailed by the death of Sheldon Adelson.

It is very likely that someone had advance knowledge of the Las Vegas shooting. Everyone remembers the story of the mysterious woman who walked through the crowd of concertgoers an hour before the shooting yelling, “You’re all going to fucking die.” That could have just been a crazy drunk woman, but I dunno. It could have been a coincidence, but if that’s the case, it was one hell of a coincidence.

That’s what I find interesting about those 4chan posts. Maybe it’s just a freaky coincidence. But if that’s the case, it’s a hell of a coincidence. We’ll never know the truth with certainty, but this theory at least provides a motive for the Vegas shooting — something the police and feds have never done.

The fact that it ties in with Charlottesville is interesting as well. I would not have thought that the James Fields “car attack” was an op. By all accounts, he was a genuine Nazi, and it is entirely plausible that with Antifa attacking his car, he may have panicked. Likewise, if he was part of an op, he would have nothing to lose by saying so at this point. But when someone calls the James Fields “car attack” an op before accurately predicting the next one, it makes me say, “Hmmm . . .”

» Conservatives Can’t Give Up On “Team USA”