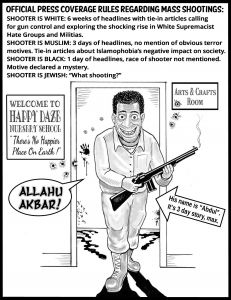 In the immediate wake of 2013’s Boston Marathon bombing, writer David Sirota — a skinny dork with delusions of being a tough guy — wrote an article for Salon.com called “I Hope the Bomber is a White American.”

I hope that Sirota was disappointed to the point of lifelong fecal incontinence that the bombers turned out to be a pair of foreign-born Chechen Muslim brothers with an axe to grind against all things white and American.

On Monday, in the immediate wake of a mass shooting at a King Soopers grocery store in Boulder, Colorado, battalions of whiteness-loathing social-media dorks didn’t even stop at “hoping” the shooter was white — they declared he was white and launched into the shopworn, threadbare, statistically unsupported memes about the mere fact that he was taken into custody alive proves he was white, because police shoot all black suspects dead — even if they’re innocently standing around holding a phone — whereas they treat all white criminals with kid gloves.

Mind you, these are the same innumerate shlubs who bemoan the fact that there are currently over two million blacks in the American corrections system who magically didn’t get shot dead when they were taken into custody. They are also the same shrieking turds who avoid all discussion about the fact that there isn’t a single category in the FBI Uniform Crime Reports that blacks aren’t overrepresented, often to an absurd degree.

Meena Harris is the niece of Kamala Harris. While the blood was still wet and sticky in the supermarket aisles, she tweeted “The Atlanta shooting was not even a week ago. Violent white men are the greatest terrorist threat to our country.”

When it was revealed that the suspect was a Muslim Syrian immigrant who left ten dead white bodies, she deleted the original tweet but burped up the following alibi:

I deleted a previous tweet about the suspect in the Boulder shooting. I made an assumption based on his being taken into custody alive and the fact that the majority of mass shootings in the U.S. are carried out by white men.

What she said is technically correct, but one of the multifarious reasons that blacks score the lowest of any racial group on standardized math tests is that they struggle with the idea of “per capita versus raw numbers.”

In raw numbers from 1982 to the present, whites committed around 54% of all mass shootings — a slight majority. But depending on whether or not you count “white Hispanics” as white, America currently hovers around 60% to 70% white. Therefore, whites are statistically underrepresented when it comes to mass shootings, whereas blacks — who are presumed to never commit mass shootings — are overrepresented, just as they are among serial killers.

In the immediate aftermath of New Zealand’s 2019 Christchurch shootings, Ahmad Alissa — the suspect in the Boulder massacre — shared the following Facebook post from another user:

The Muslims at the #christchurch mosque were not the victims of a single shooter. They were the victims of the entire Islamophobia industry that vilified them.

In 2018, Alissa was convicted of misdemeanor assault for sucker-punching a white student while in class. None of the witnesses — nor Alissa himself — claims that his victim said anything to him that day that immediately precipitated the assault. Instead, he told police in his 89% white hometown of Arvada, Colorado that he felt his victim was laughing at him along with other students, even though he denied that his victim was pointing at him or even looking at him while laughing. He did claim, however, that the victim had called him “racial slurs” a week or so earlier.

Well, there you go — there’s your white-supremacy angle. He was bullied by white supremacists in an overwhelmingly white town until he was forced to strike back to defend his dignity by any means necessary.

I have no idea whether or not Alissa was taunted for being a Syrian-born Muslim by his white classmates, but I’m reasonably sure that if I’d attended high school in Syria, the other students would have found a way to “other” me in ways that were less than kind. Right or wrong, that tends to be how majority populations treat outsiders all across the globe.

As a result of his anti-white hate crime, Alyssa was sentenced to a brutal and unforgiving 48 hours of community service.

Angel Hernandez, who was a member of the high-school wrestling team along with Alissa, suggests that the accused mass murderer was another hate-crime hoaxer in the making:

He would talk about him being Muslim and how if anybody tried anything, he would file a hate crime and say they were making it up. . . . He was always talking about (how) people were looking at him and there was no one ever where he was pointing people out. We always thought he was messing around with us or something.

If Hernandez is telling the truth, Ahmad Alissa was fully aware he lived in a society where a nonwhite could get away with attacking a white by falsely claiming to have been attacked for his ethnicity. I’m fully aware of this, too, because a quarter-century ago, I experienced it from the other end.

I’ve found a lot of evidence suggesting that Alissa is a paranoid schizophrenic and zero hard evidence that he was ever bullied for being nonwhite.

His older brother Ali — who blamed “mental illness” rather than “politics” for the shooting spree — said that for years, Ahmad said that he felt he was constantly being tracked and stalked:

When he was having lunch with my sister in a restaurant, he said, “People are in the parking lot, they are looking for me.” She went out, and there was no one. We didn’t know what was going on in his head.

In 2019, Ahmad Alissa made two online posts suggesting that “racist islamophobic [sic] people” at his high school had been hacking his phone.

One thing Alissa had in common with Atlanta spa shooter Robert Aaron Long was an inability to get laid, but I don’t see many people attempting to pin the massacre on inceldom.

Although Alissa is only 21, he’s grossly overweight with “a major bald spot on the top of his head,” yet no one is suggesting that his killing spree was caused by body-shaming. Even after the shooting, his own sister-in-law told reporters that Alissa was so fat that he “looked like he was pregnant.”

I haven’t seen anyone in the MSM pondering whether a yearlong mass lockdown might make people go crazy, regardless of their ethnicity or ideology.

You won’t see any of the paid-and-controlled yippity-yappers suggest that both this massacre and the Atlanta spa shooting indicate that perhaps multiculturalism doesn’t work.

And except for here and a dwindling number of other outlets, you are guaranteed to never hear anyone ponder whether the endless media and educational canting against whiteness brainwashed Ahmad Alissa into feeling justified for taking out a supermarket full of crackers.