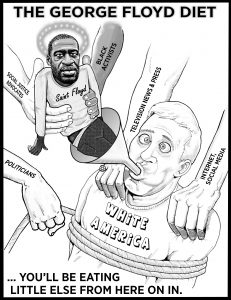 If I had known George Floyd, I don’t think I would have liked him.

There’s a good chance he wouldn’t have liked me, either, and if you dislike me merely for saying I would have disliked him, I’ll take an immediate dislike to you, too.

What bothers me even more than you and George Floyd, though, is that it seems as if no one is ever going to SHUT THE FUCK UP ABOUT GEORGE FLOYD. More than eight months after this fentanyl-addled dumbo’s death, they’re still using George Floyd’s carcass and clubbing white America in the head with it.

On January 26, after signing four executive orders “that seek to curb systemic racism,” Joe Biden’s craggy, saggy, gnarled balls cited George Floyd’s death almost as if it had anything to do with systemic racism.

In an essay that asks the pressing question, “Are Your Diversity Efforts Othering Underrepresented Groups?” two nonwhite women cite a study that claims four in ten black women “report feeling uncomfortable sharing their thoughts on racial inequity” in the office. They also, for some reason, feel the need to mention that “More than eight months have passed since the murder of George Floyd and eleven since that of Breonna Taylor.”

Three self-described “white female educators who, over the course of our lives and careers, have been on a journey to understand, research, and fight against discrimination” offer an online “Anti-Racism and Allyship 7 Day Journey” that for some mystery reason feels compelled to mention “the police killings of George Floyd, Breonna Taylor, and Ahmaud Arbery in 2020.”

Which is worse: George Floyd’s death, or any use of the word “allyship”? It would not be prudent for me to answer.

In case you weren’t aware, “after the police killing of George Floyd there was a push of solidarity among many Latinos for Black lives” and a concerted effort to confront “anti-Blackness in the community.”

Last night’s Super Bowl — where Tom “The Aryan” Brady and his cold blue eyes outplayed Patrick “Half-Breed” Mahomes — was a Celebration of All Things Negroidal, with every commercial and official ceremony and song and message an endless drone of negro worship (which Google Translate renders in German as Negeranbetung.) And of course they had to mention racial justice about 1,000 times and George Floyd at least once.

Citing “a global protest movement for Black justice [that emerged] in the wake of the death of George Floyd at the hands of a white police officer,” the Times of Israel gleefully announced the launch of a “Black-Jewish Entertainment Alliance,” featuring 170 celebs that are either black, Jewish, or in rare cases, both. One of those celebs is Nick Cannon, who lost a few plum gigs after claiming that blacks were the real Semites, only to regain favor in the entertainment industry after offering this highly groveling public apology:

First and foremost I extend my deepest and most sincere apologies to my Jewish sisters and brothers for the hurtful and divisive words that came out of my mouth. . . . They reinforced the worst stereotypes of a proud and magnificent people, and I feel ashamed of the uninformed and naive place that these words came from. . . . I want to assure my Jewish friends, new and old, that this is only the beginning of my education.

Cannon has said much worse things about Europeans than he ever said about Jews, but no one expects you to apologize these days for calling Europeans “savages” who must murder to survive.

Two white Southern entertainers whose identity as performers hinges on being white and Southern were recently forced to genuflect before their Negroidal superiors.

Morgan Wallen is a contemporary country star who was revealed in a video last week to be in an apparent state of inebriation outside of his home and telling one of his friends to “take care of this nigger,” which as far as I can tell referred to one of his drunken white pals.

Wallen’s radio airplay immediately dropped by almost three-quarters, but the ban was counterbalanced by a spike in sales of 1,220%. Still, he apologized for calling his white friend the “N” word, which, if you think about it, is more of an insult to the “Ns” than to his white friend:

[I’m] embarrassed and sorry. . . . I used an unacceptable and inappropriate racial slur that I wish I could take back. There are no excuses to use this type of language, ever. I want to sincerely apologize for using the word. I promise to do better.

Kathryn Dennis was the blonde bimbo star of a reality show called Southern Charm, but she faced a torrent of online shaming after using a monkey emoji in an online argument with a black radio host. But then, after she “started reading a lot about race and privilege as the Black Lives Matter movement surged in 2020 following the deaths of George Floyd, Breonna Taylor and more Black Americans” — as well as marrying a black dude that she describes as “just real” — she squeaked out the following flatulent blast of ethnomasochism:

I think it would be really cool to see someone who did have to realize that they very much had white privilege and then turn that into the other side. Once you realize that, what do you do with it? That’s where I’m at, and I’m working on it. This is not me saying what I did was OK, or any of that. It’s just acknowledging I made a mistake and, yeah, I didn’t really have to grow up thinking about these types of things or having difficult conversations like this. I know that speaks to my privilege, but that’s why I say this was a wakeup call for me.

And just as we can no longer afford to tolerate charming Southerners, we must offer a sharp-tongued NEIN! to the very existence of “Nazis,” even though it’s technically impossible for Nazis to exist, seeing as how the term is specific to a defunct German political party.

Historical accuracy aside, the Capitol siege caused “echoes of the Holocaust” to ring in some old Jewish lady’s ear. A 95-year-old German woman who was a secretary in a concentration camp is being tried for murder — but she’s being tried as a juvenile, since she was under 21 when it all happened. Although the religious Right couldn’t take Marilyn Manson down in the 1990s for being a Satanist, the woke left may finally put the nail in his career with accusations of him being a rapist Nazi. And a lonely woman who seems to have made it her life’s mission to purge the heavy-metal scene of “Nazi scum” laments that “there is still much work to be done.”

Have you ever noticed how these people never finish anything? OK, they’ve made a lot of progress, but there’s still a long road ahead of them. It’s almost as if their entire identity — or maybe their bank account — somehow depends on never finishing all the work that still needs to be done.

Sure, the post office may take six months to deliver letters these days and the economy is ready to collapse and the nation is far beyond the capacity to heal, but at least we have the “first-ever Black, lesbian Batwoman” and a NASCAR diversity program designed to make this whitest of sports less white.

I’ve said it so many times that I’m permanently blue in the face rather than white, but I really wouldn’t care about being white if you didn’t keep making such a point of it.

But this, eh, “system” you’ve set up cannot possibly lead to racial harmony. The only question is whether this is by design.

White people are not to have self-esteem; they are forced to endure endless self-reflection. In contrast, nonwhites are encouraged to love themselves and hate whites. Who in their right mind with more than a chickpea-sized brain thinks this can possibly end well?

All the other groups are marinating themselves in racial identity — basking, wallowing, and euphorically writhing around like pigs in the steamy wet shit of their shared genetic ancestry.

Meanwhile, whites are supposed to live a monastic existence of constant dour self-flagellation. They must sit quietly and take personal inventory. They must examine biases that are both unconscious and invisible — no mean feat. They must practice endless humility. They must do all this despite that black people insist on hating them, anyway.

A world where everything black is sacred and everything white is profane cannot last. Diversity — compounded even more by double standards — will make people of all races, colors, and creeds insane.

And white people these days need at least one hero.