Inventions of a Lesser Kind 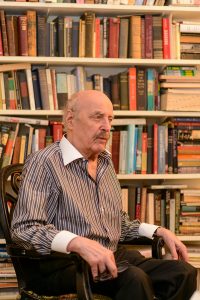 Many if not most of the fixtures of our modern age that make life easier, less painful, and more enjoyable we possess because of some very smart, determined American men who decided to invent things that would improve the lives of their countrymen. Let me offer just one example: Charles Kettering from Dayton, Ohio, in the early years of the twentieth century, knew that there must be an easier, safer way to start an automobile than to stand in front of the car and crank a very stiff, metal handle that could accidentally snap back with enough force to break an arm or leg. Someone needed to figure it out. So, he put his formidable intelligence and considerable energy to the task and. . . voila, the electric starter. Only the very old among us now can recall the days before a simple turn of a key got your car started instead of a full-bodied, potentially hazardous “ordeal.” Kettering also invented the electric lights for automobiles that made driving at night much safer.

The combination of Charles Kettering’s inventive genius and its contribution to the ease and safety in the lives of millions of people is a small part of a much larger story of American invention and its inventors — Benjamin Franklin, Thomas Edison, Alexander Graham Bell, the Wright Brothers — to name just a few of the greatest. There are many more lesser-known and recognized inventors. Early and mid-twentieth century inventors eased the lives of modest-means Americans with an explosion of labor-saving, modern appliances: electric washing machines and dryers, power lawn mowers, vacuum cleaners, and refrigerators, to name just a few. Air conditioning post-WWII made hot, hot, sticky places like Houston, Miami, St. Louis, and New Orleans more livable.

American invention has, unfortunately, taken a different — shall we say, less ameliorative — turn. Today, our busiest, most “productive” inventors don’t come out of factories, laboratories, or machine shops. Unlike Charles Kettering, they are not exceptionally smart. Worse, their inventions don’t make anyone’s life any easier, safer, or more enjoyable. Thanks to them, our lives are more miserable.

Where do they come from? Universities. What do they invent? Grievance vocabularies. These inventors are themselves the products of a late-twentieth-century invention known generically as the “Studies Curricula.” Here is sampling from the prestigious University of Michigan’s subject-majors that an undergraduate student can pay $18,000 a year in tuition and fees to pursue: Afroamerican and African Studies, Women’s and Gender Studies, Latina/Latino Studies, Social Class and Inequality Studies. My personal favorite, however, is Lesbian Gay Bisexual Transgender Queer Sexuality Studies. The “studies” you see listed here are replicated and multiplied in universities across the country from the elite/selective to the “We’ll accept anyone who can breathe and pay the tuition” bottom-rung. A patent search produced by alums from any of these programs would be, to put it kindly, highly disappointing. The graduates of these programs do, however, come away with a learned vocabulary of accusations, eviscerating invective, insults and slurs, and an in-your-face attitude they use to intimidate any unsuspecting bigots who might happen to stumble across their paths.

The post-1960s “studies curricula” is the epicenter of a deluge of unpatented inventions that are now part of daily American life. Generically, these inventions fall into the categories of “isms” and “phobias,” suffixes that become part of the labels we have all become painfully familiar with, labels that no one wants to be branded with. “Sexism,” “racism,” and “homophobia” are a mere sampling. They just keep coming. Most recently from the brainpower of a Queer Studies “researcher”: “transphobia”. “Transphobe” is a technical term for a parent who objects to his daughter being forced to share locker facilities with a guy who thinks he’s a girl.

Let’s select one of these established, highly successful inventions to illustrate how they work, “homophobia.” George Weinberg, a psychologist, is the inventor of record: he coined the term in the late 1960s. With the invention of “homophobia” in our midst we discovered — well, uncovered — “homophobes,” lots of them. Most of us, it would seem, at that time. Now, a dedicated social justice warrior might want to argue that Professor Weinberg merely devised a label to identify what had been in long existence. Not really. “Homophobia” is a weaponized ideological invention that masquerades as a diagnostic term for a defect in the mental health of people who themselves are perfectly healthy. “Homophobia” was invented to turn the disapproval of homosexuality into a pathological condition.

This was somewhat challenging, given that the disapproval of homosexuality is rooted broadly across most cultures with religious sanctions that reach back for millennia. A disapproving person can be an intelligent, rational interlocutor you can debate with and understand. To illustrate: “I love my son, but I disapprove of his homosexuality; it conflicts with my Christian beliefs.” This is completely understandable and rational. No hatred is expressed. The speaker is justifying his moral judgment of his son on religious grounds. Perhaps you, the other participant in this conversation, don’t share his religious beliefs. But you don’t (yet) get to dictate what religious doctrines are permissible and how they are to be interpreted. A phobia, on the other hand, is by definition irrational, a psychic impairment. Homophobes are not rational. They are sick. You don’t debate sick people. If they refuse treatment, you isolate them.

People who attack physically homosexuals because they are homosexuals: Aren’t they homophobes? No. There is a more established word to describe them, one that everyone will agree upon: “criminals.”

There is a similar pattern with “Islamophobia,” a more recent invention. Given what we know about the fanaticism of certain Islamic sects, the violence against Christians, and the subjugation of women in many Islamic countries, is it not reasonable, based on self-interest, for Western people to resist large-scale immigration of people from Islamic countries? But disapproval of Islam, like that of homosexuality, has been converted into a “phobia.” An “Islamophobe” is a person in the grip of a pathological fear of Islam: rationally-based disapproval has been converted into a sickness. To repeat: you don’t debate sick people. You listen to them only to discern the “symptoms” of their illness so that they can be “cured.”

From phobias we move to the potent “isms.” There are a number of them, but the most important “ism”-invention is “racism.” It has a much longer and more complicated history than the recent phobia inventions. “Racist” began post-WWII as a word to describe the beliefs of the defeated National Socialists in Germany. It quickly migrated and attached itself to American segregationists and then more broadly to white Americans who discriminated against black Americans. It barely paused. “Racism” has now moved beyond a belief that one might hold. All white Americans simply by virtue of being white are considered to be “racists.” It’s in “our DNA,” as former President Obama so eloquently put it. “Racism” even infects inanimate objects like statues, monuments, and twenty-dollar bills.

“Racism,” however, has begun to run out of gas. No white person in his right mind wants to be a “racist.” It’s not good for your career, your social standing, or your reputation. White people now go out of their way to strenuously deny that they are racists if only to remain employed. So: we’ve arrived at a point where “racism” is everywhere, yet no white person can be found who even under torture would admit to being “a racist.” Such a conundrum demands a creative solution: thus, “systemic racism,” an invention that gives new meaning to chutzpah.

With “systemic racism,” what white people think or say about being racists doesn’t matter an iota. “Racism”, whether they realize it or not, is a heritage thing. Their white, slave-owning, European ancestors put the “system” in place, a system that incidentally continues to attract “people of color” from all over the world. No matter. Whites exclusively benefit from it — “white privilege” — which makes them racists. It’s the entire system, not individuals, that is to blame, which is why their European heritage is under assault and its cultural symbols are being erased. Its descendants bearing their “whiteness” are collectively pronounced guilty of hatred and bigotry that is mysteriously expressed by voting for a black man to be their President and making a martyr out of a black career criminal, a violent one, who died while resisting arrest.

So, I conclude with several questions to ponder. Which of these two inventors has made America a happier, safer more enjoyable place to live: Charles Kettering or George Weinberg? How do the “inventions” from the university grievance factories make our lives better and America more of a friendly community? How long will it take for white people to wake up and figure out that “systemic racism” is only going to get worse and the blame for it will fall like a fury on their diminishing posterity?

» Sympathy for the Gorilla Glue Girl