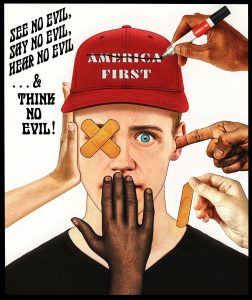 Watching footage from January 6th’s “Capitol Siege,” I saw oceans of American flags and Trump flags. I heard people screaming about democracy and a stolen election. I heard them chanting “Christ is King!” and “Four more years!” I saw what appeared to be a crowd composed mostly of boomers and soon-to-be-boomers yelping about how, every so often, the tree of liberty needs to be refreshed with the blood of tyrants.

Apparently I was hallucinating, because it was actually a white-power rally. Or at least that’s how “they” are spinning it.

Hillary Clinton — whose vaginal fangs are still bloodthirsty after her husband’s public infidelities and the loss of an election that she and her ilk insisted for three years was hijacked by homophobic Russian disinformation bots until people started realizing these allegations were baseless — wrote an OpEd for the Washington Post where she spoke of “a violent mob waving Confederate flags and hanging nooses.”

I’m only aware of one person waving one Confederate flag. I’d bet my house that Confederate flags were outnumbered by American and Trump flags by a factor of about a thousand to one. And I’m pretty sure that the dimwits who erected a gallows said it was for Mike Pence — who, for better or worse, is no Emmett Till. Beyond that, there was one guy with long grey hair wearing a “Camp Auschwitz” sweatshirt, but unless he personally explains why he wore it, I think it’s open to interpretation. Maybe he felt that MAGApedes were going to be sent to concentration camps?

No idea. I wish I was able to read minds like so many other writers are.

But based on that one Rebel flag, that one noose, and that one rioter wearing an ambiguous sweatshirt, mainstream pundits said the event was a murderous expression of toxic whiteness.

Hillary Clinton stopped bitch-slapping her husband long enough to peck out the following:

Wednesday’s attack on the Capitol was the tragically predictable result of white-supremacist grievances fueled by President Trump. . . . Trump ran for president on a vision of America where whiteness is valued at the expense of everything else. . . . There are changes elected leaders should pursue immediately, including advocating new criminal laws at the state and federal levels that hold white supremacists accountable and tracking the activities of extremists such as those who breached the Capitol.

When did Donald Trump ever address white people as a group?

I don’t think Republicans have ever given a damn about “white supremacy” or about white people in general. They’ve consistently made that clear.

After soaking her head in a 50-gallon drum of retinol, Nancy Pelosi said that the rioters proved they had “chose their whiteness over democracy”:

I thought it was going to be an epiphany for those who were in opposition of our democracy to see the light. Instead, it was an epiphany for the world to see that there are people in our country, led by this President, for the moment, who have chosen their whiteness over democracy. That’s what this is about. . . . When that assault was taking place on the Capitol, 3,865 people in our country died of the coronavirus, many of them people of color because of the injustice of it all.

At least from the words and actions of the protesters, they seemed highly focused on democracy. The entire event was based on the premise that the election had been stolen from them. I didn’t see or hear anyone make a point of being white.

Billionaire Richard Branson bewailed the event, saying it was an “outpouring of hate” based on his allegation that a “large portion of America’s electorate . . . [is] gripped by fear of a rapidly changing world and the dismantling of privilege and power generations of white people have come to take for granted, knowingly or not.”

Unless you hate the “generations of white people” in question, how is it a bad thing to resist losing power? One wonders how Richard Branson would feel if Alexandria Ocasio-Cortez told him that his $4.5-billion fortune was only made possible through white supremacy and that he had to be immediately divested of every last penny — by force, if necessary.

The New York Times referred to the event as a “white riot.”

The Associated Press — which formally capitalized “black” but kept “white” lowercase last year — was very careful not to share too much information about exactly who died in this “deadly” riot. The AP said that “Five people died in the mayhem” and that Capitol Police “calmly asked [rioters] to leave the premises.”

I suppose it would be detrimental to the AP’s narrative to mention that a black cop “calmly” shot an unarmed white woman dead with one bullet to her neck.

Another AP article said that the siege left “a Capitol Police officer and four others dead.” It failed to mention that the dead cop was a Trump supporter and, again, painstakingly tiptoed around that whole thing where the black cop killed an unarmed white woman.

The Conversation alleged that the “White supremacists who stormed US Capitol are only the most visible product of racism.” It equated the Proud Boys with the Ku Klux Klan.

The attack could also make it tougher for congressional Republicans to resist the Biden administration’s expected efforts to dramatically increase enforcement against white supremacists through the Justice Department, the FBI, and the Department of Homeland Security. By demonstrating both the danger of white nationalism and the bias in policing, last week’s assault has not only elevated those issues even further, but also exposed their common roots.

CNN alleged that the siege “redefined White supremacy as a form of treason.”

Since some of the attendees were white women, Vox leapt at the opportunity to explain “White women’s role in white supremacy.”

New York Public Radio used the event to cobble together a “History of White Violence in America.”

David Brooks — the New York Times’ token fake conservative — wrote that if the rioters had been black, the Capitol’s “hallways would be drenched with blood.”

Hmm. I tend to remember about 200 days of nonstop black rioting over alleged police brutality starting in late May last year, but my memory fails me when I try to remember any white cop shooting an unarmed black person in the throat throughout the whole sordid affair.

Also writing for the Times, someone named Farhad Manjoo — sounds like one of the Founding Fathers, right? — alleged that

These were not just the Trump loyalists of lore, that economically marginalized, over-elegized white working class of the heartland. . . No, the crowd that stormed the Capitol was a big tent of whiteness, a cross-section of American society bridging divisions of class, geography and demography. They were doctors and lawyers, florists and real estate agents, business executives, police officers, military veterans, at least one elected official and an Olympic gold medalist. They’d all come to coup for America.

PBS said that the siege was “an appeal to the lawlessness that shaped the lynching era.

I’m going to forsake my journalistic duties and state without even researching it that PBS never once referred to the endless George Floyd riots and the copious amount of anti-white rhetoric and anti-white violence that accompanied them as “lawlessness.”

And of course the siege had to be depicted as a Holocaust-in-waiting, with Arnold Schwarzenegger comparing it to Kristallnacht and Chuck Schumer placing a highly religious spin on it, kvetching that “this temple to democracy was desecrated.”

Guys, I’d suggest toning down the Kristallnacht analogies, because it implies that Congress is merely a Jewish storefront.

One thing a few pundits got right was the fact that the Capitol siege turned everyone who is opposed to the Leftist agenda into a KKK terrorist. The Detroit Free Press said that the post-election fallout “erodes buffers between mainstream GOP and extremists.” USA Today said that the siege placed Zio-con Trumptard Jack Posobiec and Andrew Anglin of the Daily Stormer in the same train car to Camp Auschwitz.

We are all wignats now.

All these cold takes about the siege say a lot more about the pundits than they do about the rally’s attendees.

If there’s anything good to come from the event, maybe it’ll wake a few people up to the fact that the Left, aided by the FBI and the mainstream media, has declared war on white people. Don’t you tire of insisting “It’s not about race” when your opponents always correct you and say: “Look — it IS about race! It’s about YOUR evil race!”

Then again, maybe the ones who insist it was a white-power rally are merely projecting. Perhaps it wasn’t about white identity at all — it was about people who’ve made careers out of bashing white people getting secretly terrified to see so many angry white people in one place.