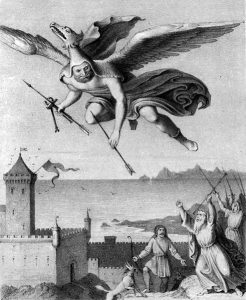 A manuscript containing Hitler’s ideas for an opera entitled Wieland der Schmied, inspired by Wagner’s draft for a libretto of the same name, was recently put on display for the first time at the Museum Niederösterreich. The museum is currently running an exhibit on Hitler’s early life featuring artifacts collected by August Kubizek between 1907 and 1920.

Hitler’s youthful attempt to write an opera is described in Chapter 18 of Kubizek’s The Young Hitler I Knew. When the 19-year-old Hitler became aware of Wagner’s draft, he immediately set about composing his own opera based on the legend of Wayland the Smith. He dictated his work to Kubizek, an aspiring conductor. Hitler also designed scenery and costumes for the opera. He initially wished to use ancient Teutonic instruments, but Kubizek persuaded him that the use of modern instruments would be more practical.

Hindered by his lack of musical training, Hitler eventually abandoned the opera. The scope of the project far exceeded his capabilities. Nonetheless, this early endeavor is a testament to his extraordinary resolve. Even as a 19-year-old, he had grand ambitions and approached life with great seriousness. Kubizek writes that he worked on the opera obsessively.

Based on Kubizek’s account, it appears that Hitler wanted to write his own treatment of the myth rather than adhere to Wagner’s draft, though the draft was what inspired him to write the opera.

Wagner wrote both a draft for the libretto and a shorter précis of the opera. The latter is appended to his 1849 essay “The Artwork of the Future.” Both can be found in the first volume of Wagner’s collected prose works. Wagner completed the draft in Paris and planned to have it translated into French, but a translation was never made. He offered the libretto to Liszt, who replied that he refused to write a German opera. Wagner never finished the opera, though some ideas from the draft found their way into The Ring.

The opera takes place in Norway. Wieland is at his forge crafting bracelets when he and his brothers spot three swan-maidens who are likened to Valkyries. One of them, Schwanhilde, falls into the sea, and Wieland promptly rescues her. After he removes her wings (recalling Siegfried’s removal of Brünnhilde’s armor), Schwanhilde tells him that she has been wounded by the evil King Neiding. Wieland confesses his love to her, and she gives him her magic ring.

Neiding’s daughter, Bathilde, steals the ring and burns down Wieland’s house. Her brother, Gram, captures Wieland and takes him to King Neiding’s court. Swayed by the power of the ring, Wieland falls in love with Bathilde and (like Siegfried) loses memory of Schwanhilde. Bathilde’s father wants the ring, but she explains to him that Wieland will fall out of love with her and seek revenge if she relinquishes it. Neiding decides to cripple Wieland. Before doing so, he provokes Wieland into killing Gram because he is troubled by his children’s incestuous relationship. The ring is damaged amid the chaos, prompting Bathilde to ask Wieland to repair it.

At the sight of the ring, Wieland suddenly remembers Schwanhilde. Believing that she is dead, he prepares to kill Bathilde in revenge. Bathilde hastily informs him that Schwanhilde is still alive. Wieland creates a pair of wings in order to escape and rejoin his wife. In his final encounter with Neiding, he fans the fires of the forge with his wings. Neiding perishes in the flames. As the king’s men attempt to seize him, Wieland soars above the smoke. Schwanhilde flies to meet him, and the two fly together into the distance.

The character of Wieland is more morally ambiguous in the source material. In the Poetic Edda, Wieland/Völundr rapes the king’s daughter and kills his sons, fashioning goblets from their skulls, jewels from their eyes, and a brooch from their teeth. In Wagner’s version, Wieland does not rape Bathilde and is merely prodded into killing Gram. (He is, however, responsible for Neiding’s death.)

Wagner saw Wieland as a symbol of the German people and the fight for German nationhood. His summary of Wieland der Schmied in “The Artwork of the Future” concludes thus: “O unique and glorious Volk! This is it, that thou thyself hast sung. Thou art thyself this Wieland! Weld thou thy wings, and soar on high.” Wagner equates Wieland’s “terrible, all-powerful Want,” his need to escape, with the “common and collective Want” (“gemeinschaftliche Noth”) that defines the Volk. The music drama would liberate the German Volk in the same way that Wieland was liberated by “the work of his own Art.”

In the 1880s, Slovak composer Ján Levoslav Bella composed an opera, Kováč Wieland (Wieland the Smith), based on Wagner’s draft. It premiered at the Slovak National Theatre on April 28, 1926 and is considered the first Slovak opera. Unfortunately, I have not been able to locate a performance of it. Despite its place in Slovak history, the opera seems to have fallen into obscurity.

In 1904, Siegmund von Hausegger composed a symphonic poem inspired by Wagner’s outline of Wieland der Schmied. Hausegger was a devout Wagnerian. He even married into the Wagner family: his wife was the daughter of Alexander Ritter and Franziska Wagner. In 1933, Hausegger co-signed a letter written by Hans Knappertsbusch condemning Thomas Mann’s attack on Wagner. Hausegger was also a great admirer of Bruckner and was one of the first conductors to advocate the use of the original versions of Bruckner’s symphonies. (Most editions of Bruckner’s symphonies are heavily modified.) He conducted Bruckner’s eighth symphony upon the installation of a bust of Bruckner in the Walhalla Shrine in Regensburg; Hitler oversaw the ceremony.

Hausegger’s Wieland der Schmied is a grand symphonic poem in the vein of Strauss or Liszt. Its chromatic harmonies, lush orchestration, and narrative subtlety point to Hausegger’s firm grounding in the German post-Romantic tradition. The work is divided into four sections that depict Wieland’s courtship of Schwanhilde, Wieland as a cripple, Wieland as he forges his wings, and Wieland’s flight respectively. In Hausegger’s outline, Wieland’s union with Schwanhilde does not come until the end:

The power and fame his art have created do not suffice for Wieland; he yearns for more. A swan-maiden hovers, descends out of the sky and inclines toward Wieland. He reaches out, but, frightened by his singeing subterranean fire, she flies away. Powerless to follow, he collapses, assailed by the paralyzing thought that he who would be lord of the skies is bound insolubly to earth.

The vision of Schwanhilde fades; a cripple, Wieland stumbles, friendless through his life. Of what use is his art, power, fame? The pain of longing builds up to a cry for redemption.

Suddenly, the lethargy melts away. The transfiguring and blissful vision of Schwanhilde rises within him. His strength returns, bolder than ever. His art will carry him to luminous heights!

He forges himself wings of glittering steel. From the sky, the voice of Schwanhilde calls. Free of his earthly woes, he spreads his mighty wings and flies up to his woman. United in love, the couple soars into the sun.

The opening evokes Wieland’s angst and his yearning for something greater than earthly fame. The lyrical themes that follow represent this longing and are combined with the explosive descending horn motif introduced at the beginning, culminating in a cry of anguish. Then comes Schwanhilde’s shimmering, ethereal theme. The interjection of the horn motif represents Wieland’s attempt to woo her. The brass climax and ensuing silence represent his collapse.

The second part of the piece, marked “schleppend” (“dragging” or “sluggish”), begins with a disjointed version of the horn motif, representing the crippled Wieland. This gives way to a lyrical woodwind theme whose upward motion conveys a sense of yearning. Once again there is a dramatic brass climax followed by silence. Then Schwandhilde’s theme appears. The ensuing crescendo represents the gradual return of Wieland’s strength.

The beginning of the third part is rhythmic and martial, calling to mind the hammering of an anvil. Hausegger quotes from Siegfried’s Forging Song. Bits of Schwanhilde’s theme appear, foreshadowing the conclusion.

The final part opens with the triumphant return of Schwanhilde’s theme in the key in which it first appeared. A string duet accompanied by a cascading harp and woodwind pattern represents their union. An excerpt from Schwanhilde’s theme sounds in the brass. The piece concludes with triumphant trumpet calls accompanied by the glockenspiel (reminiscent of Wieland at the forge) and a bold final chord accentuated by the clash of a cymbal.

Russian-Dutch composer Leopold van der Pels also composed a symphonic poem entitled Wieland der Schmied. It is lighter and dreamier than Hausegger’s, with occasional touches of Debussy. The glockenspiel part at the end is perhaps an homage to Hausegger. Though not without merit, the work falls short of Hausegger’s more Germanic take on the subject.

It is easy to see why Wagner considered the legend of Wayland suitable material for a völkisch music drama. The dramatic finale would energize audience members and inspire them with a spirit of rebellion. Perhaps the next great composer among us will consider picking up where Wagner left off.