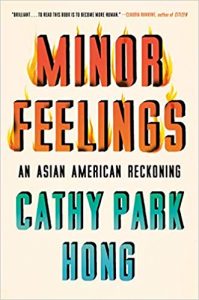 Is it really wise to allow the immigration of people who find it so difficult and painful to assimilate into the American majority?
— Peter Brimelow

It would take a heart of stone to read the self-absorbed, neurotic words of Cathy Park Hong in her book Minor Feelings and not laugh. However, there is a deadly seriousness to this drivel. To sum it up, Cathy Park Hong represents the burden of Korea upon America. This particular burden is a sub-set of the greater non-white burden with a few unique factors which will be explored below.

Koreans were effectively barred from entry into the United States until the 1965 Immigration Act. Shortly after their arrival, they became seen as something like a model minority. That is to say, they were perceived as successful, intelligent, capable, and relatively crime-free. They experienced a great deal of white sympathy following the 1992 Rodney King Riots where they were specifically targeted by blacks. There was a sort of “Whites and Asians together” concept that existed in the decades following the riot. The concept was probably a cuckservative idea that was more related to the disappointment whites felt at the failure of “civil rights” rather than an actual combining of whites and Asians politically and culturally.

Cathy Park Hong shows what I’ve observed through two tours in Korea with the military and growing up around military bases with their contingents of Korean camp followers. Korean culture is not very dynamic. The professionalism, intelligence, creativity, lawfulness, etc., is a mirage. Korean immigration to the US, of which Cathy Park Hong is a part, has been problematic from the get-go. I have always been professionally disappointed by Koreans outside of a classroom environment.

Cathy Park Hong’s family came to the United States after the 1965 Immigration Act disaster. Her father turned out to be highly successful selling life insurance. [1] He eventually purchased other business interests and moved his family from Koreatown in LA to the suburbs. However, Hong writes that most of her community was a hive of bankruptcies, interpersonal violence, failure-to-launch issues, and other troubles. Many Koreans left the United States following the Rodney King Riot. Hong calls her family life “cheerless.”

This high-drama at the private level matches some of what David Straub wrote about in his book Anti-Americanism in Democratizing South Korea — a book about the sub-lethal Korean-American War of 2002. Straub went on to look at the later careers of the most vociferous anti-Americans during the conflict, and these people and their careers were not successful — one man ended up in jail for some sort of domestic drama. Roh Moo-Hyun, who used anti-American attitudes to win the 2002 presidential election, later committed suicide by jumping off a bridge to his death.

Cathy Park Hong describes many of these problems through a Korean concept called Han. Like other Korean concepts such as kibun, nunchi, and inhawa, han has no English translation. Hong describes han as, “. . .a combination of bitterness, wistfulness, shame, melancholy, and vengefulness. . .” which she blames on “. . .years of brutal colonialism, war, and the US-supported dictatorships that have never been politically redressed.” She goes on to add, “. . .to be Korean is to feel han.” [2]

I suspect that han doesn’t come from colonialism. It’s more likely a longstanding feeling Koreans have already had prior to their colonization. Han probably explains mass-shooter Cho Seung-Hui’s murderous neurosis. One can easily see that a culture where bitterness, wistfulness, shame, melancholy, and vengefulness comprise the normal emotional setting is not a society that can advance. With such a setting, there can be no geniuses or even disciples of geniuses — just passive-aggressive rage-quivering. It could be the cause of being colonized rather than the result of such. One can say the rage-quivering instead of progress of Han has consequences. When the big national test came against the Japanese in the late nineteenth and early twentieth centuries, the Japanese had Dreadnoughts; the Korean navy had a paddleboat.

Cathy Park Hong is part and parcel of the non-white, female, hysterical, and mentally ill coalition that became increasingly empowered during Obama’s second term. The book starts with Hong’s description of her depression. Apparently, she and her good friends have mental issues. One of her friends even put lithium pills in Peeps candy to give to others.

Resentment is interwoven through the book; resentment that Seoul is covered in dust from a natural phenomenon called “the Yellow Wind” (which she doesn’t seem to understand), and resentment that movies whose plot settings take place prior to 1965 don’t have more non-whites. She has resentment that her face is too Mongolian, too wide, with eyes too slanted, and her looks are too homely. Her resentment over her looks is everywhere in this book. Hong has much resentment towards a type of plastic surgery, developed by a US Army surgeon during the Korean War, whereby Oriental women can get the epicanthic fold removed from their eyes so they look prettier. Apparently, this surgery is very, very popular in South Korea. The envy and resentment over her looks are as pathetic and contemptible as it is striking.

There is nothing profound in this book. She identifies with Richard Pryor’s jokes but has no ideas of her own. She seems to have been inspired when one of her Oriental girlfriends cut a loud fart. Another Asian girlfriend wore garish clothes in Seoul, which was also somehow inspiring. Her poetry is drivel and has none of the force and cultural awareness of Kipling, Chaucer, Shakespeare, or Counter-Currents’ poets. She claims to be repelled by whites, but seeks to be around them as much as possible. She is utterly mediocre and yet she is a sitting professor.

The purpose of having people like Cathy Park Hong in academia is not that she says anything valuable, it’s that her existence keeps a white from that job. The crowns sit easier on the heads of the Hostile Elite when the poets and teachers are like Hong. As genius is unstoppable, such a person can’t permanently stop a new Kipling from arising of course, but she does help suppress such a thing in the short term. With her in a professorship, a white poet has to fight a bit more for recognition and it could be easier to just go unpublished and take the job as a bank manager.

There is a clash of two irreconcilable viewpoints between Koreans and Americans that needs to be explained also. Americans view their relationship with South Korea with some pride. After all, they defended South Korea from Communism at great cost over several generations. In doing so, South Korea became quite wealthy. American-free North Koreans really did starve during the “Arduous March” of the 1990s. South Korea is not an American colony. It’s a wealthy, subsidized land, more akin to Israel than British India.

From the South Korean perspective, the view is different. They rage about the fact that mid-grade American officers divided Korea at the end of World War II, and the fact that America dropped a great many bombs during the Korean War. Hong believes that “lives and resources were sucked” [3] from Asia by the Americans.

This view is a misreading of events. Americans decisively won a war that Japan started when Korea was already a prostrate colony; hence the unfortunate division. Americans haven’t dropped any bombs on Koreans since 1953, and Americans provided a system to generate wealth. It was Genghis Khan’s form of imperialism who “sucked lives and resources.” But anti-American resentment in South Korea and anti-white resentment among Koreans in the US is mainstream and unlikely to be challenged within the Korean community. Those from a conformist culture that views loud farts as rebellion and whose children cannot take it upon themselves to flee an obviously sinking ship such as the 2014 Sewol ferry disaster will never be able to unshackle themselves from their resentment. They could quiver with han forever.

America’s relationship with Korea is a burden. Since the end of the Cold War, we have an unnecessary enemy in North Korea and a resentful, sullen, hostile ally in South Korea. The contributions of Koreans to American culture is also suspect. There are no great inventions, cultural works, or breakthroughs, but there are prostitution rings, liquor stores, old people dumped on the Social Security System, and of course Cho Seung-Hui, Sarah Jeong, and Cathy Park Hong. One cannot reason with envy and resentment. Time to disconnect. Withdraw the troops from Korea, pass the tariff law, and bring on the travel ban.

[1] Making a pile of money through insurance is difficult to do. If one is white and has some sort of cultural ties to Connecticut, where insurance companies abound, all one’s friends and family are likely insured. If one is from a recently arrived non-white minority, one can easily carve out a niche and sell to an untapped group.

» The Ugly Truth Behind Beauty