They Will Devour You 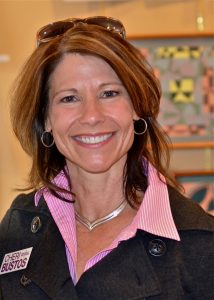 Rep. Cheri Bustos of Illinois, recently purged from the DCCC for being insufficiently ethnomasochistic.

Fiasco struck at the Democratic Congressional Campaign Committee (DCCC) recently, and this should give rise to a great deal of schadenfreude on the Right. Basically, the white leadership of the DCCC got purged by black and Hispanic elements in the Democrat Party. Committee Chair Cheri Bustos and Executive Director Allison Jaslow had seemingly put whites in most of their top positions, and black and Hispanic lawmakers were having none of it. They had been applying pressure for a while, and finally, the white heads started rolling.

On Monday morning, Allison Jaslow, DCCC executive director and a close ally of Rep. Cheri Bustos (D-Ill.) – chair of the committee –  resigned during a tense meeting at the party’s Capitol Hill headquarters. And in the next 10 hours, much of the senior staff was out: Jared Smith, the communications director and another Bustos ally; Melissa Miller, a top DCCC communications aide; Molly Ritner, political director; Nick Pancrazio, deputy executive director; and Van Ornelas, the DCCC’s director of diversity.

Of course, Bustos is being accused of not caring enough about diversity. She campaigned on making the DCCC more diverse when she ran for the Chairmanship, but seemed to want to only put members of her own tribe in all the top spots. That may not be entirely fair, since the DCCC has been plagued with minority turnover – recently losing a black to the Kamala Harris presidential campaign and an Asian to the Democratic Senatorial Campaign Committee. And it’s not like the DCCC doesn’t staff non-whites. Again, according to Politico:

So either these thirteen non-white senior staffers are diversity-hire sinecures whom they keep in the back and away from the cameras, or the 48.15 percent non-white DCCC senior staff just isn’t enough to satisfy today’s Democratic Party. It’s a wonder why white people vote Democrat at all these days. Yes, there has been some substantive criticism of Bustos. For example, she has been accused of being a moderate for not supporting progressive policies such as Medicare for all, free college for all, and a Green New Deal enthusiastically enough. But after perusing the Politico coverage, it seems that people are equally concerned about a faux pas she committed while defending herself against the charges of being anti-diversity. What was her mistake? She referred to her husband and children as being of “Mexican descent,” and she mentioned how her son is marrying a black woman.[2]

Then there’s the interracial infighting sparked by The Washington Free Beacon, which uncovered decade-old tweets from a black DCCC staffer in which she expressed anti-Mexican and homophobic sentiments. Come down hard on the black staffer and you alienate your black constituency; come down soft on her and you alienate your Hispanic constituency. What’s a white politico to do?

They all went down. They’re calling it the “Monday Night Massacre.” Jared Smith tried to bring order to the proceedings when he said, “Anyone seeking to divide our party and stoke infighting between Democrats at a time when Donald Trump is in the White House is undermining our ability to protect the majority.” Yeah, that had about as much impact as you would think.

From a Rightist perspective, I have three takes on this issue, all of which stem from the ability to see this train wreck coming over the horizon without a pair of binoculars. One is to buy some popcorn and watch the show. Nothing could be better for the Right than to watch the Left crumble under the weight of its own diversity. Diversity is strength, you say? Then why is there so much infighting? And over what? Race? Isn’t that what we are supposed to look past? I thought race was a social construct. Apparently not for black Representative Marcia Fudge of Ohio, who wouldn’t even meet with Bustos until she diversified the DCCC. And apparently not for Hispanic Representative Raul Grijalva, who accused Bustos of operating out of “some 1980s playbook.” No, for these people and others like them, tribalism matters. No one here is caring as much about actually winning; they would rather act as racial bean counters and only agree upon having as few white beans as possible.

Do they not see how petty and childish this is? Do they not see how ridiculous it is for the Chairwoman of the DCCC to proclaim her bona fides by trotting out the race of her future daughter in-law – like that has anything to do with her ability to do her job?

Don’t they also realize that maybe – just maybe – Cheri Bustos did have her eyes on the prize all along, and brought in the people she thought could do their jobs well? Isn’t there any benefit of the doubt to be given here? Apparently not. And this is good for the Republicans and good for the Right. I know that some writers on this very site have been predicting Donald Trump’s defeat in 2020, but if this is the state of his opposition, then he and the Republicans are a lock. The chances are excellent that the black and brown people the DCCC finds will not do their jobs as well as the whites whom they are replacing. This is how racial diversity tends to work. So any good Right-winger should applaud the shakeup at the DCCC and enjoy watching his enemies peck and scratch at each other like a bunch of mad hens in a cage.

My second take is one of sadness. As the Z-Man says, I am on team whitey. I hate to see my own team lose. Yes, I am so ethnocentric that a small part of me pulls for the white Left-wingers over the non-white ones. I can’t help it. Further, the whimper with which Bustos and Jaslow accepted their forcible displacement was downright embarrassing.

When I was in eighth grade, I decided that my life would be dedicated to serving my country. My commitment to the mission, our country and the people who commit their lives to serving it is unwavering. And, sometimes selfless service means having the courage to take a bow for the sake of the mission – especially when the stakes are so high.

For her part, Bustos has agreed to “take part in diversity and inclusion training,” according to Breitbart. Of course she did. Somehow it would have been more respectable if these two had torn their dresses, broken their shoes, and smudged their makeup while being carried out of their offices kicking and screaming. But no. When the raging mob comes for your head, best to bow down and let them take it – all the while proclaiming how much you deserved it. All for the original sin of being white. Cheri Bustos and all the white victims of this racist purge should be ashamed of themselves for letting it happen. These individuals are weak, and they’re making the rest of us look bad. The non-whites who took part in this coup did so not because they care so much about diversity, but because their opposition was so pathetic they knew they could get away with it.

My final take is to issue a warning to all whites. This is your future when you consort with blacks and browns. This is the final result of any affirmative action or entitlement program you offer these people. They will use your largesse and goodwill against you, and they will take over any organization of which they are a part. They will devour you. For whites, it’s about inclusion and fairness. For the blacks and browns, it’s about power and nothing else. How do I know this? Because a 51.85 percent white DCCC is too white for these people. Diversity is only an issue when there are too many white people. It’s as simple as that. Isn’t it abundantly clear that these non-whites simply hate white people and wish to run them out of power in the country their people had founded? Is it really so hard to see that diversity is a weapon that non-whites use against whites to get what they want? Any white person who thinks otherwise either isn’t paying attention or is too frightened of non-whites to resist.

Cheri Bustos should have told her non-white ousters to pound sand – because that is exactly what non-whites will tell white people once their conquest of this country is complete.

[1] Note the Orwellian lack of specificity in the language, both from the DCCC and Politico: “42 percent of the DCCC’s entire staff identifies as racially diverse.” How does one identify as “racially diverse”? Literally, that would mean being biracial or multiracial, wouldn’t it? But in this case, it means simply not being white. You know something insidious is going on when you have to drill down like this to interpret language. People are talking around things rather than about them – which indicates they’re afraid of something.

[2] According to Politico, Bustos’ comments about her family were considered tone deaf by other Democrats. Representative Emmanuel Cleaver called it “a very dumb statement.” And why? Aren’t Democrats supposed to be in favor of miscegenation? Why are they criticizing Bustos for pointing to her family to defend her honor? Would it be equally tone deaf for Kamala Harris to speak of her white husband in the same way? Or Barack Obama his mother? Probably not. Whites cannot expect their enemies to remain ideologically consistent, because combatants are never and should never be ideologically consistent while fighting a war. The more multiracial the United States becomes, the more warlike its politics will become. And one of the great tactics that non-whites use in this war is to limit a white person’s right to speak freely – all the while claiming that very right in its entirety for themselves. It’s a game white people will always lose as long as they consent to play it.