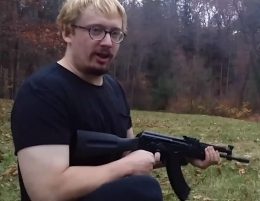 Our goal this year is to raise $100,000 in order to expand our efforts to build a metapolitical vanguard for White Nationalism. So far, we have received 369 donations totaling $53,970.23. We set our goals high because the task we have before us is formidable, but with your help, we will succeed. Even after being cut off from two different credit card processors this year, we have managed to raise more than half of the total amount in under three months. We want to thank everyone who has supported us so far.

NB We are again able to receive recurring donations and donations from credit cards outside the US.

Before I wrote for Counter-Currents I had stumbled across it once or twice, and formed a vague impression of it as a dense thicket of philosophical discourse and impenetrable criticism. I still get a glimmer of that weightiness when I scroll through its kaleidoscopic variety of articles. Some of it seems like protective coloration, put there to repel the dummies and troublemakers. (No snappy, hot takes here, folks – please move along!) Mainly, though, it’s just the result of an environment where writers can be expansive, and don’t have to squeeze their critiques into 500 words of bite-size baby-talk.

Ah, but it’s not all ponderosity here! I’ve only recently become aware of the engaging humor of some contributors. Don’t want to name names, because then I’ll leave everyone else out, but Nicholas R. Jeelvy and Travis LeBlanc never fail to entertain. I had, like, no interest in enduring monograph-length treatments of The Sopranos or the Chapo Trap House book, but the reviewers’ insight and razor wit made these a pleasure to read. Then you have Spencer J. Quinn, who made it possible for me to comprehend what that recent National Review-Max Boot kerfuffle was all about.

The great thing about such articles is that the writers aren’t even trying to be funny most of the time: they’re just describing what they see in Clown World, and they can do it frankly and at length, because they’re writing at Counter-Currents.

A little while back, an old colleague of mine had a piece in a certain high-toned Left-leaning weekly about the difficulties of writing comedy in the Age of Trump. The angle here was, whenever you brainstorm a mildly amusing skit about the current political scene, you find Orange Man has beaten you to the punch. You think up an outrageous situation, then it turns out that Our Glorious Leader has already been there, done that. What my gloomy comedy-writing friend was really trying to suss out, I believe, was why Mr. Trump was so much funnier than he was.

Does this story sound familiar? That’s probably because it’s been written a dozen times before, with different bylines but generally the same plaintive attitude. The best treatment of the subject – not too whiny-pants – was probably by The New Yorker‘s own Emily Nussbaum, who tackled this Age-of-Trump comedy problem two-and-a-half years ago, winging off the premise that she grew up thinking “humor” was some kind of Jewish invention, and that Right-wingers and jokesmiths were natural-born enemies. (“I had the impression that jokes, like Woody Guthrie’s guitar, were a machine that killed fascists.”)

Nussbaum made a serious effort to get beyond the loudmouth poses of Trump & company. She tried to dissect, with some success, the reasons why Right-wing humor was now all the rage. Her piece is rather dated now – time, she is such a thief! – with its references to Pepe memes, Tila Tequila, Chuck Johnson, and Breitbart‘s lighthearted field guide to the “Alt Right” . . . as well as its inevitable conflation of MAGA Trumpites with the far Right. But it comes close to identifying the reason why the Lefty humor that now dominates Saturday Night Live and the cable “comedy” shows is so irremediably lame.

It’s not really a matter of political leanings. Right-wing humor just cuts a much wider swath of subject matter and attitude. It doesn’t only make fun of the Obama Administration or Hillary Clinton (haha); it seldom does, in fact. But nearly everything is fair game: race, religion, ethnicity, my politics, your politics. We can imagine a kind of Overton comedy window: the Righty window is open wide and runs the length of the room. The Lefty one is a tiny little barred thing, high up in a prison cell.

Back when Comedy Was King – I mean the early ‘70s, the salad days of the brilliant and nasty National Lampoon, and its frightful spawn, Lemmings (wherein “Joan Baez” sings Tony Hendra’s “Pull the Triggers, N-words”); which subsequently turned into the Saturday Night Live TV show at its glittering, 1975-78 zenith – in those days, I say, most of the best material would pass as far-Right humor today.

Take the old NatLamp in its first few years, with its stable of geniuses: Henry Beard, Doug Kenney, Tony Hendra, Michael O’Donoghue, George Trow, Bruce McCall, Brian McConnachie, and so on. (“And almost no Jews!,” as Sean Kelly once memorably boasted in an issue’s Editor’s Letter.)

They didn’t think of themselves as Right-wing, or even politically engaged. But look at the stuff they produced. “Children’s Letters to the Gestapo.” “Dragula, Queen of Darkness.” “Nazi Regalia for Gracious Living.”

And then Chris Rush’s “Sick Jokes of the Seventies“:

Q. What’s black and white and red all over?
A. The graduating class of Kent State!

None of this would pass muster today in mainstream print or TV comedy. If you even suggested doing a sketch like Hendra’s comic-layout “Dragula,” I suspect you’d be canned and blackballed as fast as O’Donoghue was when he tried to put on “The Last Days in Silverman’s Bunker” at Saturday Night Live in 1982.

Nowadays, I gather, there’s a short list of rules posted in the writers’ pen:

I know people who labor in the cable “comedy” ghetto, so a little while back I forced myself to watch some of their work. Just to be polite, you know. It was painful. Cable “comedy” apparently serves the same function in modern television that HR departments do in Corporate America: It’s a sump for non-whites, lardasses, and screaming queens. The shows were all about Diversity, Tolerance, Gay Marriage. One of them starred a couple of colored guys, which suggested that we might have some lowdown raunch here, or even an updated Amos ‘n’ Andy. Not a chance; mainly there were jokes about smartphones and how lesbians text each other. Then there was another one with a lot of Mexicans who were always trying to evade La Migra – like Yogi Bear and Boo-Boo trying to snatch a pic-a-nic basket from under the eyes of Ranger Smith. This was recent enough that there were Trump jokes, and fat ICE guys wearing non-regulation red baseball caps (not actual MAGA hats; supposedly the producer balked at spending $30 a pop over at Trump Tower).

One of these sketch-writers tells me he’s trying to do a piece about Trump buying Greenland, only he has to be very careful not to say anything unfavorable about Eskimos. In fact, he can’t even call them Eskimos. (What’s the politically correct word? People of Blubber?) By the time this baby airs, if it ever does, there will probably be a Trump International Hotel and Golf Links at Nuuk Point.

Once I was part of a comedy show – a live show mostly, though we did some TV. This was a good many years ago. Our emcee at one venue was the young and unwrinkled Lewis Black; that’s how long ago it was. When I was not performing, I was supposed to come up with a couple of new stage or video scripts every week. Everyone else wrote parodies and takeoffs, but I hated that derivative drivel. I always tried for completely original stuff, using the old mail-order-cartoon-school formula, where you think of incongruous things and situations – a ballerina and a cement mixer at a church picnic, say – and then try to write a skit around that. Every once in a while, this actually worked, but most of the scripts were so obscure they ended up in a trunk under my bed.

One of my favorites was “Tard School,” about a school for retarded youngsters. Instead of being run on the principles of John Dewey or Maria Montessori, Tard School follows the teachings of Dale Carnegie. Tard School kids aren’t allowed to wear Batman t-shirts and drool into their shoes. They’re made to dress nattily, smile a lot, and say, “I’m glad I’m here, I’m glad you’re here.” They get fitness training and Toastmasters-style practice in public speaking. Excellent preparation for life and career, you see; because you don’t have to have a lot of IQ points to be a go-getter real-estate salesman. Best of all, after a few semesters of Tard School, nobody can tell you’re a ‘tard!

I thought my script was both high-concept and hilarious, but a couple members of my group were totally appalled. They gasped and gagged, probably like Dick Ebersol at NBC when Michael O’Donoghue came up with the Fred Silverman sketch. Apparently there was this new trend in political correctness whereby retard humor, or even saying “retard,” was verboten.

You can help the cause of high-class Right-wing humor and philosophy by giving generously to Counter-Currents. See details below. Or, if you’re like me and you’ve blown your wad by sending your kids to the Olympic Ski School in Kitzbühel, maybe you can write something deep and funny.