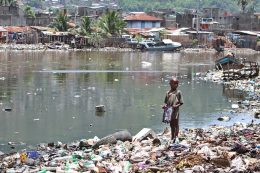 A shithole is a shithole
by any other name.
Our minds are bright and wits full.
We will not play the game,

pretending not to mark
boatloads of refugees,
their faces savage, stark
and eager for freebies.

Norwaywards we look,
to lads and lasses fair,
where good folk pull their weight—

not to turds in a dry brook
where the gorilla stares.
Yes, we know love from hate.

« What the H&M Debacle Says about Race