The GOP Deserved to Lose, but Now What? 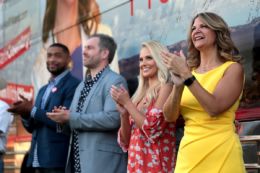 The Alt Lite is looking to seize the end of the Trump moment to put an end to any genuine Right-wing resistance in America.

It would appear that, once again, the Republican Party has snatched defeat from the jaws of victory, leaving the unlearned and forgetful masses somehow wondering how this could be. To me the answer is quite obvious. The kosher Right is very quick to throw accusations around about election fraud, to lament about unmarried women, and even, surprisingly, to talk of the “brown wave” at odds with the “white wave.” But as always, they fail to look inward at the real “meta-reasons” — the reasons for reasons — as to why the midterms were such a failure and why the Republicans deserved to lose.

Yes, the Republicans are lamenting election fraud in Arizona, and their claim is likely not without merit. But what exactly did they actually do to curb this threat? Measures were taken in Florida, and — what do you know! — the Republicans won in a landslide in spite of serious demographic changes in the state, with possible hints of a potential white-mestizo alliance appearing in some areas — especially once the liberal consensus has died off after one too many failures. In Maricopa, Arizona, the fruits of complicity were plain to see. What is especially sad about this case was how promising the candidates in Arizona were.

In instances like this, the Republicans only have themselves to blame, and frankly, I wouldn’t be surprised if the Republican establishment purposefully allowed this to happen. I have heard whispers that good candidates who actually represent the base in some way were suppressed by the party while neocon “Make Israel Great Again” types were showered with money. In my personal experience with my local Republican primaries, I can certainly confirm this to be a visible pattern, so these rumors of Republican shenanigans do not surprise me one bit, and I am inclined to believe them.

There is also whining about demographic replacement. Firstly, it’s about damn time! Secondly, where was this talk when the “mostly peaceful ethnic cleansing” of the white population was actually stoppable, or even reversible, on a national scale? The truth is that the Republican Party is by design accustomed to preventing white people from effectively expressing their interests. The Republicans could easily win national elections simply by winning two-thirds of the white vote. The rest is just icing on the cake involving certain well-assimilated segments of minority populations embracing Western culture, and thus instinctively voting Republican. Pandering does little for, say, the South Vietnamese war veteran or the Tejano. They just see white self-flagellation as effeminate and pathetic.

Another pressing demographic problem for the GOP that is likely to get worse is the problem of single women who voted overwhelmingly (shocker!) for the Democrats. It is easy to make fun of these women. I get secondhand embarrassment just from thinking about them: the archetypical 35-year-old professional-class cat lady in her shoebox apartment in some hive city. But what have Republicans actually done to prevent this demographic from growing large enough to cause a real problem in elections? Republicans are the kings of rewarding their enemies and punishing their friends because they don’t care about their base, whom they have nothing in common with. They would rather make a pathetic attempt to be liked by those who are diametrically opposed to them. As a result, Republican “pro-family policy” is a joke that historically has meant little more than bashing sexual deviants while attempting to breed the dysgenic Kentucky Fried Chicken-eating class like rabbits in some sort of quasi-Christian science experiment, and playing defense on issues that should never have been on the table in the first place, such as the new craze to promote gender theory among children.

But what have Republicans done to help the married white couple with two or more children in the suburbs, which is allegedly the core of the Republican Party’s voter base? To them, subsidies for these families, more incentives relevant to the foundations of a typical middle-class lifestyle, and proper wages are no different than the “gibs” for blacks that Republicans pretend to be against. No, all the GOP offers to these people is that their party isn’t explicitly anti-white, and historically, this has worked . . . until today, apparently, which is surely a step in the right direction.

The last demographic problem is the Zoomers who, as it turns out, are not “Generation Zyklon.” And can we really blame them? A large factor in this is the fact that Gen Z is so brown. Despite this, Republicans have nevertheless purposefully let an opportunity slip through their fingertips. Young people like things that are cool, transgressive, and radical. Thus, they want to identify with a cultural movement that is fast and aggressive. The radical Right of a century ago was willing to capitalize on this impulse, and young people and university students flocked to them.

But what is the one thing that is less cool than a dude who cut off his own frank and beans? Answer: A stuffy Republican in a suit droning on about the free market and political decency. While the online Right is perpetually energized and radical, the GOP is purposefully fake, gay, and dare I say “whack.” Is there anyone who actually likes Mitch McConnell? The obvious play for a serious political movement would be to capitalize on the youth’s virile energy. But unfortunately for the Republican base, and presumably fortunately for someone, the Republican Party is content to remain the whitened teeth in a cheap suit party. That is about as fake and gay as it gets, ladies and gentlemen. Young, intelligent radicals don’t want to vote for Ned Flanders clone #792.

As a result of this “red puddle,” the Alt Lite’s controlled opposition machine, its charge notably being led by the ghoulish Jew Mike Cernovich, has rushed to proclaim that the Trump moment is over and that now it’s time to find a new face for conservatism. What they mean by this, of course, is not just an end to Trump as a political leader, but more importantly an end to the populist revolt, to white identity politics, and quite simply to any genuine political resistance. As we all should be well aware by now, the opposite is actually true.

The Republicans did not fail in the midterms because they were too radical and populist. Rather, they failed because of terrible strategy, a weak ground game, and lazy marketing. The Democrats had nothing to offer, so the GOP did what any certified controlled-opposition party would do, which is have equally little to offer. The Republican Party is like the outer party in an amateur writer’s first dystopian novella, except with worse writing. The result was a predictably low turnout.

This presents a unique opportunity for the Dissident Right. What has been demonstrated by the GOP over the past two years is that they cannot be trusted whatsoever, and that working with them is dangerous given that their and our intentions are in direct conflict. While we are both technically Right-wing, there is very little that we actually agree on that ends up making it into policy.

As far as I can tell, the true Right has two options: first, push for increased state and local rights and greater division between states and localities until federal power is devolved and ultimately ceded, or second, have a populist Caesar figure who has elite backing and the will to take on the federal state apparatus seize power, “clear them out,” and bring about an era of stasis and sanity. Neither of these options can be accomplished with the Republican Party.

What this election has shown is that the opportunity — and indeed, necessity — for pursuing these options is fast approaching.

« Hordes at the Gate, Traitors Within, & a Home Newly Found