The Ten Scariest Things in the World 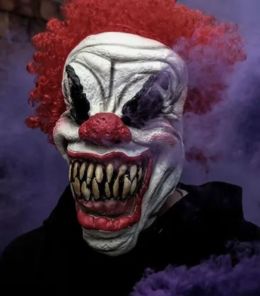 “The [scariest] shortcoming of the human race is our inability to understand the exponential function.” — Albert Allen Bartlett

To procreate, people need to be sociable enough to meet someone and decisive enough to choose them. Similarly, to make money they need to pick a career and shut out all other options. Such people excel in getting into power and then idiotically doing nothing as the world collapses around them.

Other people don’t care about pro-social rigmarole. They look at things for what they truly are. They never have a limited outlook, either. They keep their options open. They suffer for it individually, but they can see so much more than others. The problem is that others are too foolish to listen to them, because they only listen to the ladder-climbers whose sole gift is getting to the top. This is ironic, because so often what helps somebody progress in life is what makes them incompetent in big-picture thinking. It’s a wonder, then, how big picture thinkers come into existence — or, for that matter, why.

Big-picture thinkers know what to fear. They understand that what’s truly scary is not a haunted hayride Halloween event or even a walk through the drug block in a black ghetto — though the latter is unpleasant and risky. What’s truly scary is the big picture — if you’re willing to look at it. Here are ten of the scariest things about it.

Taken from download on country population size from Our World in Data.

1. Sub-Saharan Africans are doubling in population each generation. While Asians, Latin Americans, and North Africans are curbing their fertility, Sub-Saharan Africans are not. During the past 30 years, the lifespan of the average millennial, the number of Sub-Saharan Africans has more than doubled. Because of their prolific growth and hereditary low average IQ, they can’t find drinking water. The white missionaries in Africa would do well to educate them on birth control in addition to well digging. There’s already about a billion of them, and if they keep breeding like they’ve been doing, there will be four billion by 2082. That means four times more trying to cover the Earth, spreading low-IQ thinking wherever they go. The Chinese may get them to follow a one-child policy if they seize global hegemony from the decadent multiracial Western nations, but that may not happen until there’s well over two billion of them. If only whites were sane enough to humanely curb the African birthrate now.

2. Even if immigration to America stops completely, be it legal or illegal, America will become something racially like Puerto Rico or Colombia unless they repatriate non-whites to their places of origin. The way gene flow works is that genes radiate outwards within a geographic boundary until they even out among the population. It may take a long time, and caste systems might slow it down, but it is inevitable. Therefore, even total immigration restrictionists are Puerto Ricanists or Colombianists, because that’s the sort of person Americans will become after they’re done interbreeding racially.

The only whites of the future will be ethno-intentionalists. They intentionally make themselves white by rejecting non-white immigrants. This will help the world, as whites are responsible for most innovations in math and science. The world shouldn’t kill off its innovators.

3. Low birthrates among white people are causing their demographic implosion even in white nations that don’t allow mass immigration. Elon Musk claims population implosion is a problem, but won’t specify of whom. Africans aren’t declining; they’re multiplying. Most Asians are growing slowly or have steady state fertility. Demographic implosion may affect the 180 million Asians who live in Japan, South Korea, and Singapore, but it affects the billion whites in white countries as well, but Musk can’t admit it because the Jews would punish him with a Tesla boycott. Bounded by his business obligations, he is not free to refrain from being vague. He must cooperate with boycott-happy Jews so he can continue to deliver profits and electric vehicles to Boomers in the top 10% of wealth brackets, who are the ones who mostly own his stock.

4.The developed world has a Singles Epidemic. This is largely due to middle-aged men in upper-class wealth percentiles paying young men half as much, thereby making them seem like unattractive losers to women. The correlation between job performance and experience is only 0.27, and probably lower for high cognitive demand jobs, yet the correlation between age and income is 0.61. Meanwhile, non-white Hispanics are out-earning their immigrant fathers and outbreeding whites, whose family wealth they will probably vote to take. A race that refuses to pay its sons may end up having to forfeit its wealth to immigrants replacing them.

5. Judeo-Machiavellians are a consortium of Jewish and Machiavellian white elites who manipulate well-meaning followers (most of them religious) to further enrich the rich and enslave everyone but them. “Judeo-Machiavellian” is a better term than their own preferred one of “Judeo-Christian” because their ideology entails manipulative nostrums meant to increase their power. Judeo-Machiavellians believe in the freedom of the old to economically cannibalize the young, democracy for people dumb enough for them to manipulate, wars to benefit Israel and profiteers, feminism and affirmative action to suppress upstart middle-class white men, cultural alienation of whites via ethnic diversity, and pursuits of happiness for people old enough to afford them but not young enough to fully enjoy them. They aren’t self-sacrificing, honest, or humble like Christ, so they have no business calling themselves Judeo-Christian.

6. The organized Jewish community’s ability to suppress all discussion of Jewish power comes not from Jewish belligerence, intelligence, or money, but from the fact that most whites are either complicit with Jews sitting atop their hierarchies at greater rates or passively submissive to it. Whites no longer seem to possess the necessary instincts to keep these civilizational cuckoo birds from laying their eggs in their nest. Intermarriage rates may slowly weaken Jewish efforts to quash discussion of their power, but by then most white-majority nations may be like the Dominican Republic or South Africa, and the remaining cuckoos can take flight to Israel, their giant desert shtetl.

8. Whites’ genetic deterioration may play a role in their widespread political incompetence. Half of all people died in childhood prior to the twentieth century, but now nearly all live to adulthood, and the survivors may be spreading harmful genetic mutations which, according to Ed Dutton, may give rise to individuals who are physically sick and similarly politically demented. A population increasingly suffering from chronic diseases resulting from their DNA’s shortcomings is not a happy one. The great sorrows of people too sickly to partake in life may cause them to resent their race.

9. Corporations are pushing whites into one-size-fits-all roles for every occupation because they can easily replace a white who refuses to conform or who can’t conform with one of the billion people from India or China. They make no exception for gifted whites — not even geniuses. Regimentation benefits the mediocre because it centers on the average, and mediocre people tend to be average in most ways. This is partly why the correlation between IQ and income dissipates above an IQ of 126. Soon, it may dissipate at lower IQ levels as corporations become more regimented and too mediocre to match Western nations’ declining intelligence levels. 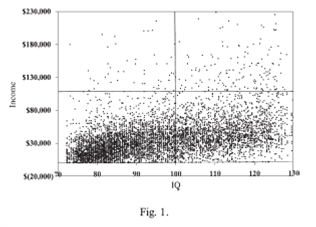 Notice how the clustering of IQ with income dissipates around an IQ of 126 as a continuation of a trend of it deviating more from a mean the higher it goes. Source: Review of Zagorsky. Do you have to be smart to be rich?

Corporations gladly make exceptions for the poorer performance of women, minorities, mentally ill transgenders, and so on as long as they accept paltry pay and all agree to support diversity, act happy despite disliking their jobs, and flatter the egos of the psychopaths and Machiavellians who manage them. Their reasoning isn’t entirely unjustified, as intelligent white men such as Henry Ford find ways to wrest money from shareholders and distribute it to workers.

Corporate shareholders are mostly super-rich Boomer Jews and whites. Growth in the stock market mirrors declining individual wealth for young whites. To some extent, the elites’ gain is young whites’ loss. Some might point out that GDP per capita, a measure of living standards, is going up, but people having fewer children in the West artificially boosts it because the same amount of wealth is divided among fewer people, and most of the growth is not benefiting the common person but a super-rich global geriatric elite. Their fun may soon be over, however, because improvements in technology cannot outpace increasing stupidity in the workforce indefinitely.

10. The inhumane conditions which Chinese factory workers must face may become the global norm for blue-collar workers. Boomers who have been out of the workforce for decades have no idea what it’s like out there, but older people nearing retirement can see how things have decayed. It’s just the same as what George Orwell accused the Soviets of doing in Animal Farm: making things slightly worse over time so that no one ever revolts against it. Now, it’s happening in the supposedly free nations. Companies can’t even get white people to work in blue-collar jobs since the pace is so grueling and the work is so mind-numbing, so they recruit non-whites to work in their stead. Consequently, the majority in a warehouse’s workforce is often an immigrant group.

With the Internet making hiring people easy, workers are replaceable, so companies can treat them badly. Employers can afford to run them into the ground and replace them with a fresh batch — as long as they make the jobs mind-numbing and simplistic enough that they don’t require training. If they run out of people to run into the ground, the Biden Administration will ship in more from Mexico. Meanwhile, the rich sneer at US white middle- and working-class people, calling them lazy and incompetent for not wanting to stoop to the level of immigrants coming from the Third World. Middle-class whites will see their children fall into these prisons despite their college degrees. The global economy is their jailer.

Napoleon said, “A leader is a dealer in hope.” It’s not leader-like to leave people in horror of the big picture with no solutions, so here are some:

» Michael Hoffman’s They Were White & They Were Slaves