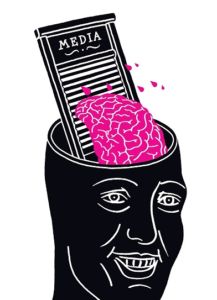 The propaganda is ripe today in my country, though it has been this way all my life. It isn’t until now, however, that it has become so flagrant and out in the open that everyone in their right mind can see it. Unfortunately, the number of insane people seems to be higher than ever, and an ever greater portion of people in the so-called “home of the brave” pretend to be asleep in the hope that, if they don’t see the monster, it won’t see them.

It’s gotten to a point where I have begun to ask myself: Do people actually believe this garbage anymore? Even in North Korea, there are still people who actually believe the insane Juche ideology, so it is unsurprising that there are people who believe our own myths as well. Yet every time the regime tells a lie that is even more obvious than the last one, I have to believe, if only to keep myself sane, that at least some people are waking up and seeing what I see.

But as incompetent as our overlords are, they are masters of propaganda nonetheless. They would not blatantly change the definition of crucial words in our language, in proper Orwellian fashion, if they had not already done a cost-benefit analysis on whether it would trigger too much ridicule to do so. We are seeing this today with “recession,” and earlier saw it with “gender” and “race,” among others.

What has truly injected new life into my pessimism in regard to the human condition is the fact that those English teachers who so vigorously taught us the dangers of dystopias and tyranny through works such as 1984, Brave New World, and Animal Farm now mimic the very pathological behaviors they warned against. They do not look twice as inconvenient facts are memory-holed and words are redefined, as in 1984. They see nothing suspicious in the unsolvable issues — implicit bias, systemic racism, climate change, disease — that are being used to gain more power for the elite, or in the constant fearmongering over supposed terrorists (“white supremacists”) who are scapegoated for any failure in their utopia, as warned of in Animal Farm. And at this point, they probably see Brave New World as a utopian story.

Those teachers and students who loved The Hunger Games now mimic the rainbow decadence exemplified in the series’ city-folk antagonists, ridiculing the hardy rural hunters who oppose them. The series’ climax occurs when the rural, left-behind people of the provinces come together to overthrow the out-of-touch, decadent, degenerate weirdos at — you guessed it — the Capitol. They preach against the book-burnings depicted in Ray Bradbury’s Fahrenheit 451, but attempt to censor any information that could potentially poke holes in their pseudo-religion.

It is no surprise at this point that the regime uses “current things” to distract the populace, and more importantly to provide constant psychological firmware updates. From the Maine, Lusitania, and Pearl Harbor back in the day to 9/11, ISIS, BLM, COVID-19, and now Ukraine, the elite constantly has something new to gin up the public.

Before 2015, this effect was useful for distracting the populace from the actual problems dividing us in order to bring the country together in the service of whatever the elite deemed beneficial for their own interests. Today, it is slightly different. Yes, they whip up the public to distract them from their own dirty dealings, but even more relevant is the fact that now, rather than uniting the country for the sake of their nefarious plans, the elite use these “current things” to divide the country into friend and enemy categories of their own devising. It of course doesn’t help that the Leftist elite are masters of Schmittian political realism (while the Left-proles seem to have an innate knack for it), while the Rightist elite are either delusional and good-willed — or controlled — enough to ignore such an important distinction.

This delusion applies just as greatly to the Right-wing masses. In the Left’s friend-enemy distinction, friends are divided into two main groups: those religious adherents who gladly accept the “wisdom” of the state cult, and those who keep their heads down and are therefore irrelevant to their takeover. The enemies are those who reject the cult outright and are therefore dangerous, as they are not only anti-regime but act as gadflies whoh can potentially increase their numbers by asking simple questions and giving the Left a taste of their own deconstructionist medicine.

The elite are able to constantly update the narrative, continually stacking new micro-narratives onto the cult’s accepted canon. This creates an uphill battle for those wishing to fight back and genuinely speak truth to power. That is to say, the narrative transcends time, and thus history itself is corrupted as the ever-changing current political views affect our understanding of history. We cannot compare the rioting of blacks today that of the 1960s because, to most normal people, including conservatives, the civil rights movement is considered to have been a good thing. Therefore, associating the two and attempting to “red-pill a normie” on the 1960s often results in precisely the opposite of the intended affect. Conversely, we cannot “disprove” the civil rights narrative by showing that, contrary to the “peaceful protest” narrative, it was anything but, because the masses who have eaten up the Cathedral’s bile now believe that there is no problem with violence if it is serves blacks’ interests – those whom they regard in the same way as Hindus do cows. It is not until a firmware update is rejected that the red-pilling process can actually have potential.

Old firmware updates were simply to move the Overton window in one direction by framing blacks and civil rights in the collective subconscious as an ultimate good. Psychological warfare artifacts such as these are the main cause of NPC (non-player character, or normie) short-circuiting, and they demonstrate the importance of keeping your children out of public school. Once this step is taken, the next is convincing them that blacks are incapable of doing evil and that anything done for their sake is permissible. This moralism has certainly internalized by most ordinary people, if not fully adhered to. The list of instances where this effect can be seen is long.

When I see the lies coming out of the media and the academy, I must return to the question I raised at the outset: Do people actually believe this stuff anymore? In the case of the elite, I simply don’t know. When blue checkmarks on Twitter apologize for using the pre-cultural revolution definition of “recession” and then reprogram themselves in real time, this question becomes most pressing. The answer, I suspect, is that they do indeed believe this drivel because to not believe it is to be an apostate. It is relatively clear that anyone who is willing to commit apostasy against the cult already has. Cognitive dissonance is not an abnormal phenomenon, and the ability of people — most especially intelligent people — to hold absolutely insane and contradictory views should not be underestimated.

People who are this far in — who have taken all the sacraments, attended all the sermons, and whose friends are all part of the same cult — have to force themselves to continue believing. Maybe they have spent thousands of hours protesting or volunteering for campaigns. Maybe they have even ruined lives and relationships and foregone raising for the sake of the cult. It is the sunk cost fallacy writ large.

The Polish dissident Andrej Lobaczewski remarked that in every population, there are roughly 6% who will literally believe anything as long as it is a path to power. The population that accepts such a pathological narrative today is somewhat higher than this, especially among the younger generations, however. Let us not forget Yuri Bezmenov’s warning about demoralization as well. Perhaps demoralization creates a new segment of the population, separate from the 6% described by Lobacewski in Poland immediately after the Soviet takeover. This group operates in a nearly identical fashion, though their behavior is the result of nurture rather than a “characterpathic” nature. After all, the United States has been simmering in increasingly insidious propaganda since the beginning of the last century, creating a uniquely demonic — and furthermore uniquely contagious — mind virus in the host population. The effect of 200 years of dysgenics coming to a head in the current year should also be considered.

It should be understood that propaganda firmware updates are not a mark of “doing the research” or “intellectual investigation.” In fact, intellectual laziness would be a compliment in comparison to what we are actually seeing. Since the days of the COVID hysteria, the idea that the population is undergoing a sort of “mass formation psychosis” or “mass hysteria” has gained popularity. This implies that this is not just the natural state of spiritual plebeians — that is, to succumb to the will of elites via a natural inclination to appeal or adhere to authority, and be easily duped by superstition. It is all but a certainty that this is simply the permanent state of the masses. This acceptance of elite narratives, which is hardly investigative or pensive, is but a sacrament for a cult whose membership provides resources that the spiritually bankrupt deem to be valuable. That is, the individual himself does a cost-benefit analysis, even if this analysis is purely Paleolimbic as to whether this truth is useful, not if this truth is the truth.

How many more people can be broken out of this psychosis? I doubt very many. Youngsters can, of course, come into their own if they just so happen to be of the right type. Less and less of them are being born and more and more of them are non-white, however, meaning that there is no incentive to even care about whether the “current thing” is real or not. Whatever the case may be, what I am sure of is that when this cycle of civilization finally comes to a close, our present chapter of history will be cited as Exhibit A as to why the world must once again abandon such naïve notions as democracy, female suffrage, atheism, the habitation of Jewish aliens, and the sovereignty of the bureaucratic, merchant, and plebeian classes.

« Ah, Look at All the Useless People