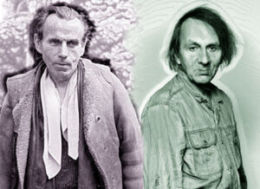 This essay is being published today to commemorate Céline’s 128th birthday. You can find all of Counter-Currents’ resources on Céline here.

You don’t have to dig too deep through the past two decades of reviews to find that the French novelist-critic Michel Houellebecq is often compared to the late Louis-Ferdinand Céline. Some of the reasons are facile and superficial, but we have some reasonable ones, too. Both writers are provocateurs. They’re both anti-Leftist and suspicious of democracy and progressivist cults, though neither slips neatly into any recognizable category of Right-wing. Both have a penchant for getting themselves into trouble with the law — or more precisely, with the political faction in control of government and information channels.

After the Second World War, the exiled Céline was sentenced in absentia to a fine and imprisonment (though later amnestied) for anti-Jewish writings and (rather sullen) collaboration during the German occupation.

In a curious parallel, Houellebecq was accused and tried for racial hatred in 2001, for supposedly expressing anti-Muslim sentiments in a novel and press interview. He was acquitted and, like Céline in the 1950s, went on to greater notoriety and literary success.

At the time of the Charlie Hebdo massacres in January 2015, it was Houellebecq himself who was caricatured on the cover of that fortnightly comic as a sort of Nostradamus. You see him here predicting that he’ll lose his teeth in 2015 . . . and celebrate Ramadan in 2022!

And then the massacre happened — killing all the Charlie cartoonists except this cover artist “Luz” (who soon resigned).

Houellebecq kept his teeth (I believe) but went into hiding, under police protection. 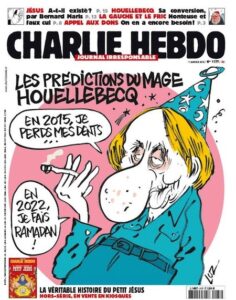 This was an unlikely plot-twist worthy of his novels. His just-published 2015 book, Soumission (Submission, reviewed here), described the eager and willing Islamicization of the French ruling caste. Though set in the distant future of 2022 (!), it cut just a little too close to the political reality of the moment. The story’s target was not Muslims but rather the parties of the French Left, who in this not-too-unlikely dystopic fantasy would rather usher in Sharia Law than endure a nationalist government under Marine Le Pen.

Getting back to Céline, here is another parallel between him and Houellebecq. Both have done a lot of interviews, but they treat them as performance art. Talking to their interviewers, the characters “Céline” and “Houellebecq” are essentially fictive creations, complete with pseudonyms, as though speaking through puppets. The real self isn’t the pen name, it’s the puppeteer behind, who won’t reveal more than he wants to. Céline’s puppeteer was a physician named Louis-Ferdinand Destouches, while Houellebecq’s is a fellow named Michel Thomas, who took his grandmother’s maiden name as a nom-de-plume. They both like to tease and outrage their interlocutors, acting out the more inflammatory aspects of their fiction.[1][2]

And as my montage above suggests, Houellebecq looks more and more like Céline as he gets old and gnarly. I tell myself this can’t be accidental. And yet — now that I’ve dragged you this far — it appears Houellebecq doesn’t have a particularly high regard for Céline at all.

He doesn’t diss him, exactly. But in his recent book of essays, Interventions 2020, Houellebecq makes a penetrating observation about our modern regard of collabo writers of the early 1940s. We cut them slack. He thinks the collabos‘ reputations are overestimated:

Don’t get me wrong. Céline is not without merit, he’s just ridiculously overrated. And Brasillach’s Poemes de Fresnes are very beautiful, surprisingly beautiful even in such a poor author. But all the others . . . Drieu, Morand, Felicien Marceau, Chardonne . . . a rather lamentable raggletaggle of mediocrities, after all. Well, it seems to me that their strange overestimation stems from a perverse emphasis on the aforementioned adage, which could be worded as: “If he’s a bastard, he’s probably a good writer.”[3]

What’s being criticized here is not politics or opinionatedness, but clarity of style. The fact is that Robert Brasillach, Pierre Drieu La Rochelle, and definitely Louis-Ferdinand Céline (I don’t know about the others) can be very hard going to begin with, whether you’re translating them or just trying to read them in the original. Houellebecq doesn’t think they’re good writers, and I’m going to guess this is because they don’t take care to state their case and develop it in simple declarative sentences. This isn’t a 1940 problem, so far as I can see; it afflicts French journalism and criticism to this day. If Houellebecq sees it too, we have to take his word for it.

Meantime, Houellebecq’s own prose is crystal-clear, a breeze to read in French and in English translation — so it is clear that this sort of transparency must a major determinant of his style. Houellebecq doesn’t like evasion or muddy thinking. He comes up with a phrase or observation, and it is often so blunt that it looks like a provocation. But meanwhile, he draws you in.

Interventions 2020, just published in English translation a few months ago, is a mixed bag: mainly interviews, published criticisms and essays, and an awful lot of funny little pensées that Houellebecq scribbled into a notebook and then triple-distilled into something you and I can easily read.

Thus the first essay in the book, a mere three pages, is titled, “Jacques Prévert is a Jerk.” That’s it. That’s the title. Looks the same in French or English. The rest of the text merely develops this theme. It appears that, as with French classes in America, French literature classes in France cram this shallow pop poet/lyricist down kids’ throats. Because he’s sort of . . . non-controversial?

If Jacques Prévert writes, it’s because he has something to say; that’s all to his credit. Unfortunately, what he has to say is boundlessly stupid; sometimes it makes you feel nauseous.[4][5]

Attacking Jacques Prévert, the shallow schoolroom poet, is small potatoes. It’s way down in the book that you realize you’re being trolled. Or somebody’s being trolled. If anyone’s reading this book in 50 years, it’ll be for the premier essay, “Donald Trump is a Good President.”

What does he say? Nothing that a gilet jaune or Charles DeGaulle himself could ever take issue with:

You could say Céline began his writing career as a medical student, doing his required dissertation on Ignaz Semmelweis and the crusade against sepsis in hospitals. Foul, disgusting disease and decay always riveted his attention, as a writer and as a doctor who usually worked among the poor. Reviewing his memoir Castle to Castle a few years ago, I noted how fantastically grotesque was his imagination, describing in detail how a hotel lobby’s toilet was forever overflowing, with rivers of urine and excrement flowing down the stairway. For visceral disgust there’s no one like Celine (except maybe Orwell at times).

Houellebecq started from a different imaginative world entirely, that of the science fiction he enjoyed in his youth. He particularly liked H. P. Lovecraft’s dystopias of multiracial fearfulness. His first published book was H. P. Lovecraft: Contre le monde, contre la vie (1991), published in English in 2005 as H. P. Lovecraft: Against the World, Against Life. And therein lay the template for most of his fiction since.

And non-fiction, too. In Interventions 2020 he recalls the time 20 years ago when he learned he’d won a prize for his first book of poems: the Prix de Flore!

So there he is, down in Saint-Germain-des-Prés . . . sitting in the Café Flore, very revved up . . . waiting for the prize festivities to start . . . and he imagines he might want to give a little speech when he takes the award. Something like: poetry has been asleep — but now it’s “emerged from its brutish slumber.” “Iä Iä Cthulhu fhtagn!” (Cthulhu awakens!)[7]

He accepts the award, but never gives his Cthulhu talk. He goes to the post-awards party and thinks his life will be much calmer from here on in.

[2] Chourrout, above, cites a typical article from The Independent (London) by John Lichfield in 2002: “Michel Houellebecq: Drunken racist or one of the great writers? . . . Prophet; pornographer; fascist; racist; trouble-maker; drunk; nihilist; moralist; self-publicist; misogynist; martyr to freedom of speech; one of the greatest living writers. Which is the real Michel Houellebecq?”

[3] Michel Houellebecq, “Emmanuel Carrière and the Problem of Goodness,” in Interventions 2020. Translated by Andrew Brown. Cambridge, England and Medford, Mass.: 2022.

[5] The Prévert craze began in the latter 1940s, and presumably annoyed Terry Southern, who was then taking a potted course at the Sorbonne in French Culture & Civilization, on the GI Bill. Southern’s Doctor Strangelove script has the Keenan Wynn noncom accusing Peter Sellers’s RAF Group Captain of being a “prevert.”

[6] Houellebecq, “Donald Trump is a Good President,” in Interventions 2020.