Let’s Break Up the USA 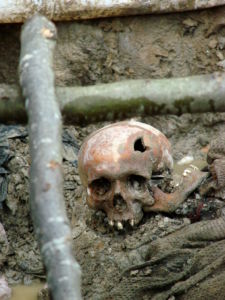 A skull from among the 8,000 ethnic Bosnians killed in Srebrenica in 1995. Is this what the breakup of the US would look like as well?

I can’t understand why Steve Sailer thinks the United States must stay intact just because the breakup of the Soviet Union didn’t go as smoothly as it could have. In his recent essay “Let’s Not Break Up the USA,” Sailer serves up a nice dish of erudition regarding post-Soviet republic woes, but offers little more than a Eurasian cautionary tale for those of us who feel a racial divorce might be the best path forward for the white populations in North America. Despite all the potholes Sailer predicts, this remains, in my mind, the less frightening alternative.

First, Sailer reminds us that a sudden fragmentation of the US would be the causes belli Washington would need to launch a war against the separatist states. Of course, no one wants that. He wrote his article a few days after the Russian invasion of Ukraine, and so wishes to impress upon everyone that something similar could happen here as well. Fair enough; war is always a risk when drastic political change occurs. Sailer brings up the bloody disintegration of Yugoslavia in the 1990s as well as post-Soviet squabbles in Georgia and Azerbaijan as examples of how a national crackup may not be all it’s cracked up to be.

To make Sailer’s argument even stronger, Tajikistan (which he does not mention) descended into a horrific, five-year-long civil war immediately after gaining independence from the Soviet Union in the early 1990s. Up to 100,000 died and 1.2 million became refugees. Also unmentioned is Kyrgyzstan, which suffered bloody ethnic strife between Uzbeks and Kyrgyz around the same time. Neither of these countries have turned out to be paragons of stability, with the pair engaging in low-level warfare with each other since April 2021.

In case anyone is worried that the events in Tajikistan might recur in post-secession America, read this summation from Facts and Details to see how unlike the United States Tajikistan really is:

The Tajikistan civil war was a confused, chaotic, multi-sided affair, characterized primarily as a power struggle between competing clans and regions even though it was cast as a battle between neo-Communists and a coalition of moderate Muslims, democrats and intellectuals. The participants in the civil war included clans and warlords who aligned themselves with the neo-Communists and clans and warlords who aligned themselves with a small Islamic force. The warlords wanted control of the country’s meager assets.

Since this dead horse still might not be dead, I have to ask: Will the European Union invade England over Brexit? Will the Czechs and Slovaks duke it out over the Carpathian Mountains? Will Sweden ever seek to regain Norway after relinquishing it in 1905? Sailer doesn’t mention all the times national breakups actually went well, or well enough to be an improvement to how things were prior to then. And while we’re on the subject of the Soviet collapse, why didn’t Sailer mention all the post-Soviet republics that didn’t succumb to strife and warfare after going their own way? We have Kazakhstan, Turkmenistan, Lithuania, Latvia, Estonia, Moldova, Belarus, and Uzbekistan. If the USSR’s demise can serve as a cautionary tale for the unrest it engendered in places like Ukraine, couldn’t it also be an inspiration for its success in all the other republics that used to fly the hammer and sickle?

Sailer seems to get his logic backwards as well. After asserting that breakups in general do not cure what ails unhappy empires, he writes:

This is especially true in the U.S. where political divisions don’t follow ancient ethnic or feudal lines, but instead reflect the cost of real estate, dividing each city from its boondocks, creating an impossible task for anyone charged with drawing a practical new map.

Wouldn’t an overall lack of ancient precedents make splitting up the United States easier to achieve? For example, what would seriously hold back New England Trump voters from joining a peaceful Red State Secession other than a few lugubrious goodbyes and the price of a U-Haul? Roots for many in America are not terribly deep relative to the primeval ethnic strongholds found in central Asia, and so packing up one’s family in a trek from Massachusetts to Montana may seem quite preferable to life under a Left-wing, multiculturalist tyranny. It’s not as if this country weren’t founded by tough, pioneering people willing to move west and start over anew.

So when Sailer brings up how an Armenian enclave in Azerbaijan was the source of ethnic strife in the early 1990s, you can see how his comparison misses the mark. Armenians have been in that part of the world since at least the second century BC. The United States has nothing on that, thank God, and so we shouldn’t necessarily look for post-Soviet trauma in our tea leaves as Sailer does.

Sailer’s biggest mistake, however, is ignoring the rising tide of color in the US, which grows more menacing by the day. Peter Bradley’s American Renaissance essay “Should Whites Put America First?” recalls my own “White First, American Second,” and provides a nice list of recent anti-white initiatives and events which demonstrate how today’s United States belongs less and less to white people:

Last year, I pointed out that the United States of America is no longer our nation. This is hardly an original insight on the Dissident Right, but millions of ordinary white Americans are learning the hard way that they have no place in the United States today. Here is some of the recent news:

And this is only going to get worse.

I’m a White Nationalist not because I want provoke civil war with the US armed forces today. I’m a White Nationalist because I can see that in a multiracial America, there is no way out for white people. In the worst of all worlds, either we accept our fate and fade into sepia-stained oblivion through oppression and miscegenation, or we wait until our cause is lost before we stand our ground and fight.

But maybe, just maybe, it doesn’t have to be this way. Maybe we can apply enough political pressure today to effect a peaceful and multi-racial (yet white-dominated) Red State Secession movement massive enough to actually work. This is one reason to support Donald Trump in 2024 if he chooses to run again for the presidency. The Left hates him so much that under Trump 2.0, many of them may want to secede as well. And then we’d have a hell of a chance.

It wouldn’t be White Nationalism, but it would be a start. It would also comply with my ISEE theoretical model of white survival, which takes us from Imbalance, which have today, through Struggle, Escape, and ultimately Ethnostate. 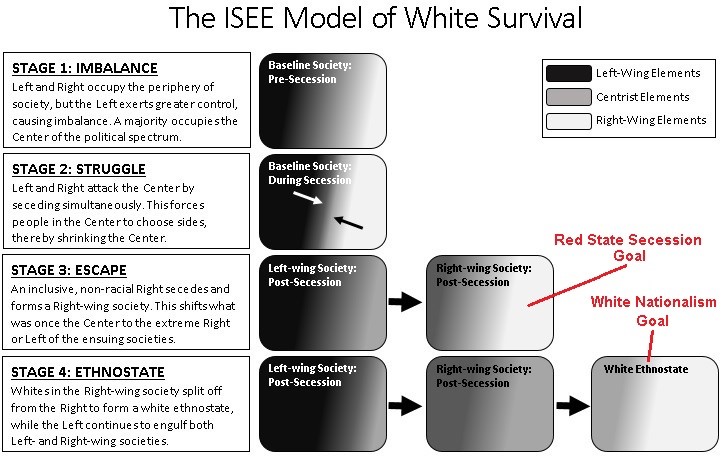 Yes, Steve Sailer’s points about war, nuclear and otherwise, are well taken. This is certainly a risk; he just doesn’t see how necessary such a risk is already becoming in today’s multiracial and anti-white United States. He also defeats himself with his own argument. The Soviet breakup gives more reasons than not to believe a split could be achieved, since most of the former Soviet republics did indeed break away peacefully or with minimal strife. Of those that didn’t, only one, Tajikistan, had to endure a long and bloody civil war — and this was the perfect Central Asian storm of competing ideologies, religions, ethnicities, and clans. Could something like this occur in post-secession America? Possibly, but it’s highly unlikely in my opinion.

So why shouldn’t we start pushing for Red State Secession today?