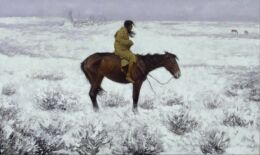 In 18th-century Scotland, civilized people agreed that the tartan-wearing, livestock-thieving denizens of the Highlands were, at best, a nuisance. So, with the help of the odd Englishman and the blessing of their German king, they subjected their ill-mannered neighbors to the fates frequently faced by folk o’ the fringe. This done, they settled down to the business of beating the English at their own game.

This, the Scots did well. (Dr. Hume. . . Dr. David Hume, please call your answering service.) Indeed, the Scots anglicized themselves so thoroughly that the nation began to suffer a crisis of identity. “What if,” they began to fear, “Scotland is nothing more than a suburb of Newcastle?” Happily, canny Bobbie Burns came up with a solution. “Let us celebrate the Highlander,” he said, “and line Princess Street in Edinburgh with wee shops that sell overpriced tartan ties to tourists.” Thus was born Scotland’s “iconic marginal person,” the avatar of a group, once dangerous and despised, that was retrieved from the dustbin of history in order to preserve their erstwhile enemies from the homogenizing effects of modernity.

In the United States of the middle years of the nineteenth century, an idealized Indian did for Americans what the romanticized Highlander had done for trouser-wearing Scots. To be more precise, the young Republic adopted as its trademark an Indian of a type that had already departed the more settled portions of its territory. Thus, in 1858, when the profile of an imaginary Indian replaced the amply-bosomed bust of the goddess of Liberty as the definitive decoration on copper pennies struck by the US Mint, the head in question wore a feather bonnet of a type often seen in contemporary drawings of the kindred of Pocahontas and Powhatan. Similarly, when Henry Wadsworth Longfellow went looking for a name for his aboriginal answer to Rob Roy, he found it in the legends of the Iroquois.

The Scots had the good sense to postpone the embrace of their erstwhile enemies until they, and their cattle, had achieved a considerable degree of safety. The same is true for the Russian celebration of the Cossack and the worship offered to the Maori by New Zealanders. Americans, however, began to idolize Indians long before the West was won. Thus, it is likely that many of the men who fought, and fell, alongside George Armstrong Custer in 1876 had memorized portions of the Song of Hiawatha in school. (Marvelous to say, the archeologists digging up the battlefield at Little Big Horn have found but a few coins among the remains of the American horse soldiers, none of which is Indian head penny.)

The speed with which the American Indian was transformed from menace to mascot is nicely illustrated by the case of Charles Robert Sherman, a prominent Ohio lawyer who, in 1820, had one of his eleven children baptized with the name of “Tecumseh.” (Whether this was the first or middle name of the babe remains a matter of historical controversy.) When this honor was bestowed, the Shawnee namesake of the future arsonist, who had terrorized American settlements for the better part of four decades, had only been dead for seven years.

The Indian served as America’s iconic marginal person for a good hundred years. Sometime in the 1950s, alas, he lost his job to an immigrant. This alteration of avatars began in Europe, where even the most obstreperous opponent of Coca-Colonization might wax rhapsodic on the subject of jazz. (Years ago, I met a woman, who lived her entire life in Iceland, and never managed to make the transition from folk costume to modern clothing, who could name but one citizen of the United States. He was Louis Armstrong.) By the end of the Last Decent Decade, America had a new Iconic Marginal Person, an unavoidably urban, and improbably urbane, figure who owed his existence to the massive migration, from the Deep South to the great industrial cities of the North, East, and West, that had so recently taken place.