Is Russia Trying to Win Over White Americans? 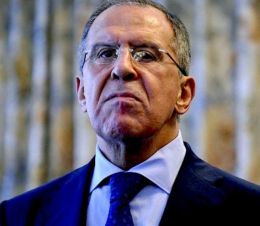 Lavrov also mocked the political correctness of American culture. “Hollywood changes its rules now, too, so that everything reflects the diversity of modern society, which is likewise a form of censorship, which stifles art and imposes various artificial restrictions and demands,” he argued. I saw black people playing in Shakespeare’s comedies. I don’t know when we will have a white Othello. You see, that’s absurdity. Political correctness pushed to such absurdity won’t end well.” How many western politicians would dare question blacks playing white characters?

Lavrov’s purpose was to skewer the United Nations dedicating a day to acknowledging the horrible threat posed by “white supremacy.” The Russian diplomat said that the decision reflects the UN operating as the “the Organization Promoting American concepts, or American trends.”

This position contrasts sharply with that of our own diplomats. Joe Biden’s UN Ambassador, Linda Thomas-Greenfield, went before the international body twice this Spring to denounce white Americans and the Founding Fathers.

Four-hundred-and-two years ago, African slaves were forced onto the shores of the colony of Virginia. Two years ago, the 1619 Project brought attention to this anniversary, and put the consequences of slavery, and the contributions of Black Americans, back at the center of our history and of our national narrative. As the project detailed, slavery is the original sin of America. It’s weaved white supremacy and black inferiority into our founding documents and principles.

She repeated those remarks again a month later. American media outlets praised her comments as a “powerful” rebuttal against racism.

America is fond of calling out Russia’s alleged human rights abuses and disregard for democratic norms. Lavrov responded to these claims with a reminder of America’s own record, particularly its persecution of Trump supporters involved in the Capitol protests.

“We are following with interest the persecution of those persons who are accused of the riots on January 6 this year,” Lavrov said last week, stressing that Vladimir Putin will press Biden on this issue when the two meet this summer. “A lot of really interesting things are happening from the point of view of the rights of the opposition and protecting those rights,” the Russian diplomat added.

It is rich for America to attack other countries that suppress protesters and dissidents when our regime does the same thing. We attack China for denying bail to non-violent election protesters while we deny bail to non-violent election protesters here. We criticize Belarus for diverting a flight to arrest a dissident while we don’t even allow dissidents to fly here. We denounce Russia for firing government workers for their political beliefs while every corporation and institution does the same thing here. This isn’t the Land of the Free anymore.

It’s good that Russia is taking this line in favor of Trump supporters and conservative whites. China and Iran prefer to celebrate Black Lives Matter and condemn America as the Great Racist Satan. China usually botches its attempts at wokeness, but it still sticks to that line. China doesn’t care about anti-white racism or the persecution of Trump supporters. The Red Dragon tries to appeal to the Left, even though the ChiComs do a poor job of it. The Iranians appear to be better at this, and it’s probably impossible for them to ever appeal to ordinary American conservatives. Russia seems to be the only world power to make this play.

Back in the Obama and early Trump years, many right-wingers idolized Putin’s Russia. Too often, they fell for the media’s depiction of Russia. Western outlets shrieked that Putin was a white nationalist, a fascist, and a threat to democracy everywhere. Some right-wingers believed these claims and decided that made Putin based. They liked how Russia seemed to oppose western degeneracy and foreign interventions. Russia was one of the few countries to stand with Bashar al-Assad against the “moderate” jihadis backed by the West. Right-wingers also liked Putin’s swagger and his status as a serious statesman.

Some of these views were more accurate than others. It is true that Putin’s Russia serves as a counterweight to America’s Empire of Nothing on the world stage and stands up for worthy states like Assad’s Syria. Putin also pursues some sensible policies in his home country, such as banning homosexual propaganda to children. (Meanwhile, American children’s cartoons teach kids to march in gay pride parades with their two daddies.) Russia also doesn’t tolerate national hatred or guilt, for better and for worse, and cracks down on traitorous billionaires. Putin also is a serious statesman, an extinct species among our pathetic political elites.

But Putin’s Russia is also far away from the fantasy ethnostate or Orthodox kingdom of right-wing fantasies. It locks up nationalists for hate speech and other dubious charges. Its immigration policy still lets in many foreigners and the regime preaches a form of multiculturalism (albeit, one less insufferable than ours). Very few Russians go to church and the nation is plagued with all types of social ills, from addiction to widespread corruption.

Russia also threatens the sovereignty of many of its neighbors. This, of course, is not a major concern for American nationalists, but it does explain why Eastern European nationalists don’t like Putin. Ukrainians, Balts, and Poles all have memories of what life was like under the bootheel of Russia. It makes sense why they would oppose Russia and their stance does deserve a bit of understanding.

That does not mean we, as American nationalists, should see Russia as the great enemy. Nor does that mean we should fawn over Russia as the SUPER BASED AND REDPILLED EMPIRE. We simply need to recognize it as a necessary counterweight to America’s BLM imperialism. No other nation will denounce anti-white racism or confront Biden about the persecution of ordinary Trump supporters. It’s good for a world player to defend our people and force the American regime to answer for its anti-white racism. Every other foreign power prefers to denounce America for the same reasons leftists do here. Russia is the only one to speak for us.

We shouldn’t turn ourselves into unwitting tools for Russian designs or into some kind of pro-Kremlin fifth column. We merely need to acknowledge that Russian propaganda is more sympathetic to our side than ever before. RT and Sputnik read more like Breitbart, minus the boomerism and zealous Zionism. They seem to no longer care about appealing to the “anti-establishment Left.” In America, there is no more anti-establishment Left. Antifa is sympatico with the FBI and major corporations. Liberals and leftists both want a more authoritarian government that locks up their political enemies. They also hate Russia and want the state to spread our “democratic values” to every part of the globe. Russians may finally realize the Left is hopeless. It makes more sense for the Russians to side with the nationalist Right.

What this realignment will look like is anyone’s guess. But as long as Russia calls out the system’s anti-white racism and abuses, it’s good for us.