Sympathy for the Gorilla Glue Girl 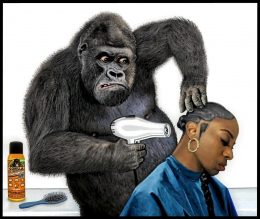 It just had to be Gorilla Glue, didn’t it?

It wasn’t bad enough that this 40-year-old black mother of five was named “Tessica” or that, like 99.9% of black women, she’d obviously spent far more of her life obsessing over her hair, nails, and eyelashes than she had, oh, reading Virgil or Chaucer.

It wasn’t bad enough that this prolific baby machine from Violet, Louisiana had an arrest record for battery or that she managed a troupe of preteen black girls called “Dancing Divaz” who use interpretive dance to protest the fact that massive doses of fentanyl make it harder for black criminals to breathe.

It wasn’t bad enough that this heavy-lidded, slow-thinking woman is such a dimwit, she spray-glued her hair onto her head using an industrial-strength adhesive — and THEN was so attention-starved that she took to TikTok last week to inquire before all the world why her hair hadn’t moved for a month.

It wasn’t even bad enough that she’s a black woman. No, the industrial-strength sprayable adhesive she used to keep her hair in place just HAD to be Gorilla Glue.

Appearing on the February 4 video with her shiny black hair plastered so closely to her head that it resembled an undersized black bowling ball or a bulbous eggplant, a sour-faced Brown griped to the camera:

“My hair has been like this for about a month now. It’s not my choice, no, it’s not my choice. When I do my hair I like to, you know, finish it off with a little Got2B spray, you know, just to keep it in place? Well I didn’t have any more Got2B spray so I used this,” she says, flashing a can of sprayable Gorilla Glue.

In a second video she recorded ostensibly to prove she wasn’t lying — which is an oddly defensive move — Brown squirts a glob of shampoo on her dry scalp, vigorously rubs it in, then wipes it off with a washcloth to demonstrate that her hair is, indeed, glued to her scalp. Before bursting into tears on camera, she says, “Look, you wipe it off and nothing happens. This is the life I’m living at this point. This is the life that I guess I’m-a have to live.”

On February 6, Brown — who apparently doesn’t have health insurance — visited the emergency room at St. Bernard Parish Hospital in Chalmette, Louisiana, where according to reports, medical technicians spent 22 hours trying to remove the Gorilla Glue from her hair using acetone packs. Failing in their noble quest to de-glue Brown’s shellacked noggin, they sent her home with some acetone. The next day, Brown uploaded a video of her sister trying to apply acetone to her scalp while Ms. Tessica winces and writhes in pain.

Brown and a relative started a GoFundMe campaign to assist in her noble journey as an empowered black American woman to scrape off the glue she had so stupidly sprayed onto her head. As of this writing, she has raised nearly $19,000.

As I type this, Brown has apparently been flown to Beverly Hills to receive a professional plastic surgeon’s three-day de-gluing operation. The surgeon, a coal-black man named Michael Obeng, offered his services for free.

There are even rumors — which Brown has denied — that she has sought a lawyer to investigate whether she can sue Gorilla Glue’s makers because the spray can’s verbiage said the product was “multi-purpose” and didn’t specifically mention that you’re not supposed to spray it on your hair.

Using the sort of extremely careful and excessively polite tiptoeing-around-a-moron language that reminds me of the white Navy Admiral calmly explaining to black Georgia Congressman Hank Johnson that he doesn’t have to worry about Guam capsizing if they send more Marines there, the makers of Gorilla Glue tweeted their concern for the newly famous — and, it needs to be said, much richer than she was only a week ago — Tessica Brown:

We are aware of the situation and we are very sorry to hear about the unfortunate incident that Miss Brown experienced using our Spray Adhesive on her hair. This is a unique situation because this product is not intended for use in or on hair as it is considered permanent. Our spray adhesive states in the warning label[,] “do not swallow. Do not get in eyes, on skin or on clothing. . . . It is used for craft, home, auto or office projects to mount things to surfaces such as paper, cardboard, wood, laminate and fabric. . . . We are glad to see in her recent video that Miss Brown has received medical treatment from her local medical facility and wish her the best.

Strangely, I did not find a single article to the effect of, “Wow, black people sure act dumb sometimes.”

Instead, I saw black female writers — who seem congenitally incapable of writing about anything beyond being black and female — rushing to Tessica Brown’s defense because like them, she, too, suffers under the weight of a white-supremacist society that somehow forces black women to nearly kill themselves while fussing over their hair.

The attention that Tessica Brown’s story received is yet another example that for Black women, hair is not simply hair. . . . For Black women, hair is racialized, gendered and classed. It also carries cultural and social meanings. Hairstyles indicated a person’s background, social status and tribe in early African civilizations. . . . Black women seek to challenge or reify aspects of these sexualized, racialized, gendered and classed depictions of themselves through the practice of adornment and hairstyling. Afro-textured hair has been denigrated, politicized, and is now being reclaimed and celebrated. . . . We find that Black women political elites are cognizant that their hair is used as a political heuristic, or shortcut, for voters.

I wonder if Tessica Brown would know what the word “heuristic” means. Or how about “denigrated”? Interesting word, that one — break it down, and you have “de-nig-rate,” which paranoid black-nationalist conspiracy theorists might misinterpret to mean “rating someone lower because they’re a Negro.”

In “Tessica Brown Isn’t The ‘Gorilla Glue Girl,’ She’s A Black Woman Who Deserves Empathy,” Candice Benbow — yet another black woman who apparently eats for an entire village — says we should weep for Tessica Brown, not laugh at her:

If it could talk, my hair would share stories of woe and abuse. My crowning glory would recount the numerous times chemical burns filled my scalp because I believed leaving my relaxer in for just five more minutes would get my hair “bone straight.” If my tresses could talk, they’d tell you how hard I had to work to grow my edges again after years of entirely too tight micro and box braids. My hair could tell the story of a Black girl trying to find her way in a world that said she needed a specific look to be accepted. . . . Why is it so easy to dehumanize Black women when we make mistakes? Why must compassion for us be measured and mediated? How different would the response to Tessica be if she were White?

Good question. If she were white, all white celebrities would be mocking her — unlike the case of Tessica Brown, who got support from Chance the Rapper, Roxane Gay, and an offer of a free wig from Beyoncé’s stylist. She wouldn’t have empathetic essays written about her by white women; instead, she’d be trotted out as yet another example of how Louisiana is a hotbed of inbred mongrels. She’d be shamed as someone who should be taking care of her five kids rather than pining for attention on TikTok.

Apparently, we will not be a cohesive society and will forever be perched upon the brink of chaos until we all accept that we’re going to have to hold black people’s hands and patronize them endlessly and hold our eyes tightly shut and pretend they are not a statistically dumb breed.

It’s sad, too, because their stupidity is a key part of their charm.

« Inventions of a Lesser Kind