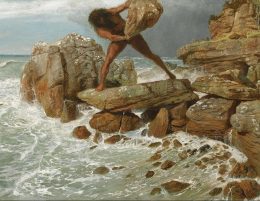 Anyone with a decent education knows that the Iliad and Odyssey concern the fall of Troy and the struggle of Odysseus against a series of eldritch terrors on his voyage homeward. The timeless appeal is clear; the style is quite gripping, which especially comes out if one has a good translation or happens to know Greek. They’ve been studied since antiquity. However, this may change. Leftist academia is starting to put the 2800-year-old author in their crosshairs.

On December 27, the Wall Street Journal published the article “Even Homer Gets Mobbed.” (It’s always a pleasant surprise whenever the MSM writes anything decent.) It begins:

A sustained effort is under way to deny children access to literature. Under the slogan #DisruptTexts, critical-theory ideologues, schoolteachers and Twitter agitators are purging and propagandizing against classic texts — everything from Homer to F. Scott Fitzgerald to Dr. Seuss.

Even Theodor Seuss Geisel’s imaginative rhymes are getting canceled? Ouch! That’s one more example that being liberal just isn’t enough these days. It seems the Cultural Revolution is starting to eat itself.

Other than that, Padma Venkatraman stated that books with outdated language are unsuitable for children, and in particular those including societal bad attitudes — the usual litany of “isms” and the catch-all term “hate.” Moreover, “Absolving Shakespeare of responsibility by mentioning that he lived at a time when hate-ridden sentiments prevailed risks sending a subliminal message that academic excellence outweighs hateful rhetoric.”

Didn’t Shylock from Shakespeare’s The Merchant of Venice also make the point that Jews are people too? I’ll go out on a limb to say that maybe his unpopularity had more to do with being a loan shark than with his religion. Well, just stop doing that, Mr. Shylock!

It always must come as a shock to the Pod People when they realize that some author in the past wasn’t a 21st-century woke Leftist. Did it never occur to them that their own ideology would become unfashionable one day? I used to think that getting “triggered” wasn’t merely a tantrum, but a terrifying meltdown for them. Maybe there’s a little more to it than that; perhaps ideologically-driven indignation is the only passion that illuminates their dreary souls. Either way, shielding students from anything that might not be considered politically correct is a disservice to them. If they don’t learn how to handle differing opinions and disagreement, then they’ll grow up to be liberal wimps too.

The article points out a tweet by Evin Shinn, who teaches in Seattle:

I don’t mind saying it: I’d rather die than teach Scarlet Letter. Unless you are teaching about how to fight against misogyny and slut-[shaming].

As someone who actually read it and understood it, never did I think that Nathaniel Hawthorne was writing with approval about the way the townies treated Hester Prynne. A writer replied with similar sentiments to one of the commenters, though more pointedly. This launched an outrage mob, which lobbied successfully with her publisher to get her contract revoked. Apologizing profusely during the online struggle session didn’t help, true to what Vox Day’s experience in these matters indicates.

Scylla and Charybdis couldn’t stop Odysseus, but finally he met his doom.

The article continues, describing how a couple of Boston-area teachers are glad that The Odyssey has been purged from the curricula. So Odysseus survived all the slaughter at Troy, various attempts by the gods to blow him off course, lotus-eating dope fiends, a one-eyed people eater, a sorceress who invited his sailors to pig out, a trip to Hades and back, a siren song, twin maelstroms, the sacred cow hamburger incident, captivity by a nymphomaniac nymph, and the final battle with a houseful of douchebag suitors. Sadly, at long last, the great mariner of the Argo sank into the Orwellian memory hole.

Legal Insurrection provides the discussion on June 4, 2020, cross-posted to #DisruptTexts:

Shea Martin: I want to remind y’all that this disruption work is a marathon, not a sprint. Be like Odysseus and embrace the long haul to liberation (and then take the Odyssey out of your curriculum because it’s trash).

Heather Levine: Hahaha — very proud to say we got the Odyssey removed from the curriculum this year!

The WSJ author further relates: “When I contacted Ms. Levine to confirm this, she replied that she found the inquiry ‘invasive.'” Further posts covered by Legal Insurrection indicate some backpedaling by Levine.

We don’t know much about Homer; the ancient sources describe him as a blind poet, and little else. There’s been much scholarly speculation about him, including the idea that perhaps he too was a figure of legend. (Again, since the Iron Age, scholars have been studying the Homeric cycle and its background.) However, we do know more about these two teachers who apparently considerably lack enthusiasm for it. Greek City Times also covered the story and helpfully provided some photos. We can see, for one thing, that Shea Martin seems to be a fan of 1980s revival Afro hairstyles. She also has better specs than the common Leftist fashion these days.

Other than that, an interview presents some further insights, and in the beginning describes Shea Martin as “a lit teacher, consultant, and researcher whose work is rooted in antiracist pedagogy, intersectional feminism, and creating liberatory learning structures for BIPOC students.” Surely I would’ve had a blast if I were one of her students! The interview is “about the big impact that small moves can make when it comes to supporting LGBTQ+ students, what it means to be an ally, and more.” For example, coming out at work wasn’t really too difficult:

Yeah, and I think in some ways I think I was blessed, in that I’ve never been able to I think in the classroom pass, in quote on quote, for straight. I think when I came out to my students my first year, I was very nervous about it, and then my students were like, “Of course we know you’re gay.” My girlfriend at the time, my wife now, they’re like, “Is that Caucasian lady your girlfriend?” So, they had picked up really quickly, and it was the cutest thing in the world, but I’ve never had that whole should I come out, should I not come out, and students questioning whether or not I was queer.

My educational experience never was quite as interesting as that. The schools sort of had a “don’t ask, don’t tell” standard for the teachers. I’m still not sure what BIPOC means, or if that even was a thing when I was young. Then again, back in the day, you either were gay, straight, or bi; all those dozens of new genders and sexual identities hadn’t been invented by academia and activists yet. We were learning about things like literature and biology instead of radical gender theory. How times have changed!

Less public information is known about the more photogenic of the two, Heather Levine. (I’m guessing that she does not have two mommies.) What could she have against sea yarns of old? That outstanding nose could be the model for a trireme’s prow, cutting through the waves of the easterly Mediterranean. A brief bio from last year states that she’s been an educator for a decade, currently teaching ninth-grade English to mostly Hispanic students. Personally, I find it difficult to get upset with anyone named Heather, but as for being “very proud” that Odyssey was canceled at school, I wish she’d stop doing that.

Neither of the two explained what their problem was with the Greek poet of 28 centuries ago. However, they didn’t have to, any more than one must explain why water is wet. This isn’t merely about philistine inclinations. If it’s not glaringly obvious, Patriot Post spells it out in great detail, including the following:

For the progressive demagogues who dominate America’s educational system, the elimination of historical references and lasting cultural elements is a feature, not a bug. Nothing threatens an agenda aimed at producing the rigid conformity of thought required by every totalitarian movement more than making students aware of ideas that challenge that conformity.

Thus, this intentional shallowing out and subsequent “reshaping” of students’ thought processes, in all its Year Zero, Orwellian permutations, must be introduced into curriculums as early and often as possible. And so an effort that began with posting “trigger warnings” on “problematic” teaching materials is proceeding seamlessly to outright censorship.

Putting it more bluntly, the cultural Marxist effort at sending classic literature down the memory hole is one front in their anti-white agenda. For nearly two thousand years, there’s been general agreement among scholars about what the great works of literature were — collectively called the Western canon — until fairly recent times. I recall that by 1990, the fad which eventually would culminate in #DisruptTexts reached my toxically Leftist campus. The student newspaper, a playground for the future cogs in the MSM, supported purging the “Dead White European Males” (helpfully abbreviated DWEMs) from the canon. Throughout this campaign, there was much crowing of approval by some characters who really need to stop doing that.

Note well, this wasn’t about adding Confucius and Lao-Tse to the canon in recognition of their contributions to world literature, which would’ve been unobjectionable. No, the old Great Ones of literature had to go, and ours most especially. Although this obviously was an anti-white agenda, we’re not even getting great ancient Chinese luminaries in place of ours. (At least we still have the immortal works of Chimamanda Ngozi Adichie.) Now that this bowdlerization frenzy has caught on in academia, the newer crop of teachers graduating from colleges like mine was instructed by their cultural Marxist professors that getting rid of the classics is some kind of moral imperative.

Now we see the results.

What will students have left to read if this goes on, with one great author after another getting canceled at the whims of perennially offended culture distorters? What will fill the vacuum?

With that in mind, I challenge any of the mental microbes at #DisruptTexts to write an epic better than Homer did.