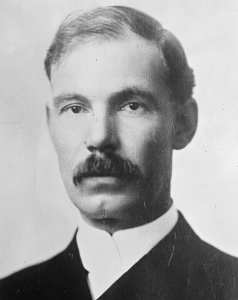 Edward Alsworth Ross (1866-1951) was a prominent professor and eugenicist. He wasn’t a man of the Right in the strictest sense — he argued that the United States should recognize the Soviet Union after the Bolshevik Revolution and he supported Franklin D. Roosevelt’s New Deal. However, one could fairly call him a white advocate. He focused on preserving America’s founding Nordic stock. He eventually became chairman of the American Civil Liberties Union.

Professor Ross was born in Virden, Illinois to William and Rachel (Alsworth) Ross. His family mostly originated in colonial New Jersey, and he also had New England Yankee roots. He was well-traveled, and he published many articles and books on various subjects. His three most important books from a white advocate’s perspective are The Changing Chinese: The Conflict of Oriental and Western Cultures in China (1911), The Old World in the New (1914), and South of Panama (1915).

There is a delicious freshness reading the works of fin de siècle Yankees. These writings are free of the goo of Negro Worship and other forms of political correctness. Ross was even quoted by Lothrop Stoddard in his classic The Rising Tide of Color. [1]

Professor Ross documents several dilemmas that have a decidedly modern ring. He might be the first person to sound the alarm about the areas of the English-speaking world that were falling behind economically. Although he didn’t use the terms Somewheres vs. Anywheres specifically, he did address them as a problem (one mentioned on Counter-Currents elsewhere):

In the rougher parts of New England to-day one finds old towns that touched their zenith eighty years ago. [This would be 1832.] The elite of the young people have regularly migrated, formerly to the West, of late to the rising cities of their own region. Aside from the aliens that here and there have seeped in, the inhabitants are of the blood of those who always stayed behind. In such districts the children are, in general, so listless that they have to be incited to play. Left to themselves, they do nothing but loaf about and play mean tricks on one another. Not half the high-school lads will watch their ball-team play a match game. They shrink from a “hike” of a few miles on a Saturday afternoon, and find the “boy scout” work too strenuous.

In other — less harsh — words, the “Somewheres” in the left-behind areas are compounding upon the problem by a lack of industriousness. It is also the same sorts of problems that Charles Murray pointed out in his book Coming Apart. This problem is nearly a century old and will require hard work on our parts to get things back on track.

In addition to ongoing low-grade civil war, the United States has become sucked into a new cold war with China. This conflict has been a long time coming, and Ross was the first to notice that the seeds for a revived China were sown as early as 1911: “Chinese culture is undergoing a breaking up process which will release powerful individualities from the spell of the past. . .” [2]

Powerful individuals did break free from China’s past. Although Mao was a Leftist and many of his policies ended with starved corpses, the Chairman turned China away from the foreign-dominated, opium-addicted malaise it was at the turn of the century. Meanwhile, Chinese anti-Communists — often educated by Western Christian missionaries — created a dynamic society in Taiwan (but without any starvation).

Ross recognized the problem of future Chinese industrial might, but in his time “. . . the evil day is yet distant when the white man’s product will be driven from the South American or African fields by the handiwork of the yellow man.”

Getting Traditional American Birthrates Back on Track

Professor Ross was a eugenicist, but most of his writing is not about abortion or sterilization laws for the “unfit.” His focus was to get fit, native stock American whites to have large families.

“The right remedy for family suicide,” Ross writes, “is to correct our philosophy of success. We have been glorifying the achievement of the individual rather than that of the family. We ask, ‘What has he done?’ But not, ‘What are his children and grandchildren doing or likely to do?'”

I believe that this effort is where Ross did his best work. Americans — Yankees in particular — had a dearth in reproduction between 1865 and 1910. There were many one-child families and many other children were carried away by diphtheria or consumption. I suspect this was related to the terrible shock of the Civil War. After 1920, however, one sees more survivors and more children born. Two of the recently published obituaries I discovered of descendants of these traditional Americans mentioned 20 or more great-grandchildren. This would mean Yankee families on the verge of extinction between the 1870s and 1890s have living descendants in the hundreds today. The Baby Boom after World War II could very well be related to Ross’s efforts.

Indeed, Professor Ross has living descendants. The problem now is the non-whites in our territory.

The Old World in the New

Probably Ross’s most famous work is The Old World in the New, a study on immigrant groups that arrived in the United States after the Civil War. The book describes the original Anglo settlers, the Scots-Irish, Yankees, and Virginians, and then discusses the Germans, who were first-comers in their own right. Ross argues that the Germans were somewhat clannish initially, but tended to assimilate quickly.

All groups described have sections documenting any issues with alcoholism. The scourge of drink was a big concern for Professor Ross. Prohibition was partially an ethnic conflict between Anglo-Americans and other groups as well as a drive for social improvement in its own right.

to control the immigration policy of the United States. Although theirs is but a seventh of our net immigration, they led the fight on the Immigration Commission’s bill. The power of the million Jews in the metropolis lined up the Congressional delegation from New York in solid opposition to the literacy test. The systematic campaign in newspapers and magazines to break down all arguments for restriction and to calm nativist fears is waged by and for one race. Hebrew money is behind the National Liberal Immigration League and its numerous publications. From the paper before the commercial body or the scientific association to the heavy treatise produced with the aid of the Baron de Hirsch Fund, the literature that proves the blessings of immigration to all classes in America emanates from subtle Hebrew brains. In order to admit their brethren from the Pale the brightest of the Semites are keeping our doors open to the dullest of the Aryans!

South of Panama is an outstanding book about South America. Professor Ross held Argentina and Chile in very high regard. Otherwise, his assessment of the culture of South America is something like a C-minus. Nonetheless, all America First people should support Latin America to such a degree that its ordinary people are content with their lot and not seek to migrate, and cause the white population there to expand.

Professor Ross and the ACLU

Ross became involved in a major academic freedom case at Stanford University — he argued that it was better to sink ships carrying Japanese to American shores than let them land. The University’s administration took a very dim view of the statement. Ross left Stanford and returned to the midwest, eventually becoming chairman of the sociology department at the University of Wisconsin.

Professor Ross also worked at the American Civil Liberties Union (ACLU); remarkable, given his pro-white remarks. Organizations like the ACLU that operate on principle but are unmoored from supporting a particular people are an unguided missile in society. The ACLU can choose which case to take or not regarding free speech. Don’t expect them to help us.

[1] Lothrop Stoddard quotes Ross in The Rising Tide of Color:

The competition of white laborer and yellow is not so simple a test of human worth as some may imagine. Under good conditions the white man can best the yellow man in turning off work. But under bad conditions [Pg 274] the yellow man can best the white man, because he can better endure spoiled food, poor clothing, foul air, noise, heat, dirt, discomfort, and microbes. Reilly can outdo Ah-San, but Ah-San can underlive Reilly. Ah-San cannot take away Reilly’s job as being a better workman; but because he can live and do some work at a wage on which Reilly cannot keep himself fit to work at all, three or four Ah-Sans can take Reilly’s job from him. And they will do it, too, unless they are barred out of the market where Reilly is selling his labor. Reilly’s endeavor to exclude Ah-San from his labor market is not the case of a man dreading to pit himself on equal terms against a better man. Indeed, it is not quite so simple and selfish and narrow-minded as all that. It is a case of a man fitted to get the most out of good conditions refusing to yield his place to a weaker man able to withstand bad conditions.”