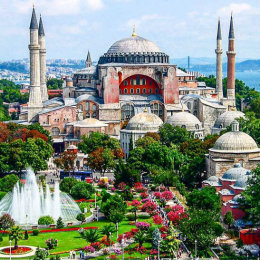 One fascinating conundrum I have been dealing with for years juxtaposes Istanbul/Constantinople the city with “Istanbul (Not Constantinople)” the song. I cannot plumb the depths of this since, on one hand, the fall of Constantinople on May 29th, 1453 (today is the 567th anniversary) was a sheer catastrophe for the West — be it for Christendom or for the white race, however you want to look at it. Thousands were killed in the fighting, and tens of thousands enslaved after three days of rape and plunder. On the other hand, I cannot help but admire the song. It’s clever. It’s catchy. From a lyrical standpoint, it’s highly original. But it, at least indirectly, celebrates the violent capture of a once-great Western city by marauding aliens and its ultimate transfer to the Muslim world.

How can that possibly be something to celebrate?

Imagine an amusing novelty number about 9/11 which employs an inventive rhyming scheme to praise the fact that there is now only one World Trade Center building instead of two. Or maybe a humorous Rip Van Winkle-styled ditty about a Dearborn, Michigan man waking up after a thirty-year sleep and finding a mosque where he expects a church.

It’s kind of like that for those of us taking the long view of history who still view Constantinople, and in fact all of Anatolia, as occupied territory. Now, fair’s fair to the Turks — they acquired the peninsula through military conquest in a manner not terribly different than how, say, Caesar subjugated the Gauls (and certainly less cruel than the manner in which Rome annihilated Carthage). They won the land in battle, the ultimate test of nation and empire. Good for them.

It’s just not good for us. And the song, perhaps through historical illiteracy, kind of pretends that it is.

Why did Constantinople get the works?
That’s nobody’s business by the Turks’

Written by Nat Simon and Jimmy Kennedy, and recorded in 1953 by the Canadian vocal group, The Four Lads, “Istanbul (Not Constantinople)” was a number-ten hit. Whether it was produced deliberately on the 500th anniversary of the fall of Constantinople is anyone’s guess. Supposedly, the song had two main inspirations (but one can suss out a third [1]). First, it was a response to the official renaming of the city to Istanbul in 1930. The lyrics comparing this switch to the equally peaceful New Amsterdam-New York change supports this notion. Second, it was a response to the 1928 song “C-O-N-S-T-A-N-T-I-N-O-P-L-E” recorded by jazz conductor Paul Whiteman. Whiteman’s song seems to be meant for children and uses the word “Constantinople” presumably because it is hard to spell.

So perhaps Kennedy, the song’s lyricist, just wasn’t thinking much beyond current events and the Hit Parade when he wrote this ingenious little song. There’s also no evidence that it had ruffled the feathers of history buffs at the time. (I looked and couldn’t find anything.) So, it seems that contemporary white audiences were either indifferent to the name change of the former Ottoman capital or they had completely gotten over that 500-year-old defeat, devastating as it was.

In a sense, who could blame them? The song is quite good. The original certainly has a languid, Oriental feel to it. The snake-charmer rhythm winds this way and that, while the backing vocals do a decent job of effecting the ululations found in Turkic folk music. And the lyrics! How many times can one cram mouthfuls like “Constantinople” and “Istanbul” into a pop song with hardly any regard for rhyme and still make it work? I find the way the Lads’ bass singer interrupts the music with the line “People just liked it better that way” inexorably charming. And could there be a more emphatic ending? Rhyming “works” with the possessive of “Turks” was pure genius.

There have been several covers of the song over the years, most notably from a group I intensely dislike: They Might Be Giants. I can’t say they are a bad group, because for what they do they’re probably the best. No one can play quirky, optimistic nerd music better than TMBG. They also turned in some perfectly fine children’s music with their Here Comes. . . releases from a few years back. But I was so revolted by their song “Your Racist Friend” from 1990’s Flood that unless they start palling around with Jared Taylor and declare themselves Dissident Rightists, I don’t want to ever give them a second listen. “Your Racist Friend” basically condemns a person for being race-realist and honest without offering any evidence to refute his position. A cowardly song, and about as catchy as a water balloon.

However, their cover of “Istanbul (Not Constantinople),” also from Flood, is brilliant. My preference, though, is for the live version which appears on 1998’s Severe Tire Damage. They speed the song up and give it a punky energy without rinsing it of its Oriental flavor. The back and forth exchanges between the two singers is a twist not found on the Four Lads version. And the trumpet solo intro is sublime.

Grudgingly I say this, but They Might Be Giants deserve credit for improving upon what in all likelihood is one of the finest novelty songs ever written.

And yet. . . the way the song enthusiastically embraces defeat and capitulation must be addressed. I cannot say that Sultan Mohammed II’s treatment of the vanquished Byzantines sank below the standards of conquest at the time. The Sultan gave his soldiers three days to plunder Constantinople, during which time thousands were raped and murdered, and approximately 30,000 were captured for slavery. According to Gibbon:

Amidst the vague exclamations of bigotry and hatred, the Turks are not accused of a wanton or immoderate effusion of Christian blood: but according to their maxims (the maxims of antiquity), the lives of the vanquished were forfeited; and the legitimate reward of the conqueror was derived from the service, the sale, or the ransom of his captives of both sexes.

Despite this, Gibbon reports how Mohammed II was relatively tolerant after conquest had been achieved.

The throne of Mohammed was guarded by the numbers and fidelity of his Moslem subjects; but his rational policy aspired to collect the remnant of the Greeks, and they returned in crowds as soon as they were assured of their lives, their liberties, and the free exercise of their religion.

In fact, by 1586, as Gibbon tells us, both Christians and Jews were more numerous in Constantinople than Muslims.

The price paid for Constantinople’s fall was more in strategic, cultural, and psychological losses than it was in the loss of life during the three-day orgy which started on May 29th, 1453. The Ottomans now could consolidate their power to the point of being able to launch further assaults on Europe (culminating in the failed siege of Vienna in 1693). They also destroyed, scattered, or lost an estimated 120,000 volumes of classic literature from the libraries of Constantinople, which “included the whole works of Aristotle and Homer, the noblest productions of the science and literature of ancient Greece,” according to Gibbon. Finally, Christian (and by extension, white European) influence had been snuffed out in the Middle East. The heights of culture achieved during the time of the Eastern Roman Empire as well as all the great things accomplished by Europeans in the centuries following Constantinople’s fall would be until relatively recently excluded from the nation we know today as Turkey.

And, of course, this says nothing of the centuries of slaving and raiding that the Ottomans inflicted upon Western Europe after 1453 which, according to Robert Davis’ Christian Slaves, Muslim Masters, resulted in the appropriation of approximately 1.2 million white, Christian souls for bondage in the Muslim world. Perhaps this feat would have been less easily achieved with a Christian Constantinople still extant in the East.

At this point, we should also compare the sack of Constantinople to its previous sack in 1204 during the Fourth Crusade. This event also involved the rape and murder of thousands over three days and possibly even greater property damage. But there are key differences. One, no source I have found mentions the Crusaders selling the inhabitants off into slavery, as was the case in 1453. Two, the assault on Constantinople was, in effect, a rogue act by a few unscrupulous Crusaders and Alexius IV, who at that time was the exiled pretender to the Byzantine throne. The attack (and the preceding attack on the Christian city of Zara) was condemned by Pope Innocent III, who had originally called on the Crusaders to retrieve Jerusalem from the Turks. It was also highly controversial in the Christian world. And third, at least according to Gibbon, the Crusaders, on the whole, may have been more restrained than their Ottoman counterparts. Their leaders did, for example, forbid “under pain of death the rape of married woman, or virgins, or nuns; and the proclamation was sometimes invoked by the vanquished and respected by the victors.”

In any event, sixty-odd years after the Fourth Crusade, the Byzantines regained what was left of their empire and held it for another two centuries — an unthinkable turn of events once the city had been placed under the yoke of Islam.

The loss of Constantinople to the Turks was a catastrophe for whites and the civilizations they created. Sure, the city was weak after centuries of infighting and corruption. Yes, it was ripe for the picking in 1453. But this does not make it any less of a catastrophe. So then why does the song end with the exultant “Istanbul!” as if the singers were on their knees thanking the Turks for conquering Constantinople? My 1984 Webster’s II New Riverside University Dictionary does not define the noun “works” as it is employed in the song. However, it does define the expression “work over” as “to inflict severe physical damage on: beat up.” I guess this could just as easily relate to the figurative (i.e., the name “Constantinople” getting the works) as the literal. But the songwriters don’t say, and audiences never seemed interested in asking. I think that any European should recoil at least a little bit at being reminded of how one of their great cities had gotten “the works” from foreign invaders. That this didn’t seem to happen in 1953 saddens me. It saddens me that twentieth-century whites welcomed a song such as “Istanbul (Not Constantinople)” while being so blissfully incurious about why and how Constantinople became Istanbul in the most meaningful sense.

Several years ago, I wrote an article entitled “The Great Forgetting,” which covered this phenomenon. Whites have forgotten that the traditional enemy of Europe had been the Ottoman Empire. But now with the refugee crisis and untrammeled Muslim immigration into Europe and America, they’re being reminded of it every day.

Let’s just hope that moving forward, a great song like “Istanbul (Not Constantinople)” will help us remember this crucial fact rather than forget it.

[1] Mark Steyn, in an article from 2017, pointed out something I had never noticed about “Istanbul (Not Constantinople).” Nat Simon may have plagiarized the music from Irving Berlin. Yes, rhythmically and methodically, “the main phrase of ‘Istanbul (Not Constantinople)’ is more or less identical to the opening bars of ‘Puttin’ On The Ritz.’” Go ahead. Try it. The lyrics remind me of how I feel about this amazing little song anyway. . .