A Mother Fit to be a Queen 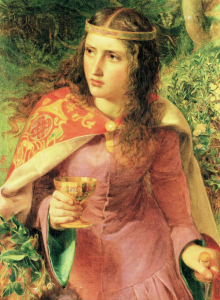 Most of my ex-girlfriends have referred to my mom as a saint. They often said this jokingly in reference to how challenging and difficult I can be at times. While no one is perfect, my mom probably deserves sainthood or the Nobel Peace Prize for putting up with me all these years. After being away for several years, I was finally able to celebrate Mother’s Day with my mom this weekend. Over dinner and a bottle of red wine, my mom and I discussed medieval history, modern society, and the importance of white identity and in-group preference.

Due to the Covid-19 pandemic, I left Eastern Europe two months ago and have been living with my mom. I would have taken my mom to a restaurant for Mother’s Day, but the local restaurants are still closed. For our Mother’s Day dinner my mom prepared steaks and opened a bottle of Chianti. While we were enjoying dinner, I asked my mom which historical figure she thought was an ideal mother. Her answer was Eleanor of Aquitaine.

Eleanor of Aquitaine was one of the wealthiest and most powerful women in Europe during the 12th century. Through two marriages, she became the queen of France and England. She also had nine children (that survived into adulthood), two of which would become future kings of England (Richard I and John). Eleanor’s five daughters were all married to counts, dukes, and kings throughout Europe. This is why Eleanor is often referred to as the “grandmother of Europe.”

When Henry II died, her son Richard took the throne and had his mother released. Eleanor then helped manage the affairs of England when Richard went on the Third Crusade from 1189 to 1192.  On his return, Richard was captured and held for ransom by the Holy Roman Emperor Henry IV. Eleanor was able to raise money for the ransom and organized the release and return of Richard. King Richard died in 1199 and Eleanor was still alive to secure the English throne for her youngest son John. Eleanor died in 1204 with her two surviving children being King John of England and Queen Eleanor of Castile.

Mother’s Day is a holiday that celebrates motherhood and the importance of mothers in society. The origins of the current holiday started in the US in 1858 when Anne Reeves Jarvis created “Mothers’ Day Work Clubs” to help take care of the sick and elderly in Appalachia. During the Civil War, these clubs volunteered to take care of wounded soldiers from both the Union and the Confederacy.

Anne Reeves Jarvis died in 1905. It was that year that her daughter Ann Jarvis decided to honor her mother’s work and memory. Ann Jarvis started a campaign to have a day that would commemorate the importance of mothers around the world. Although the US Congress rejected the proposal for a “Mother’s Day” holiday in 1908, Jarvis’s hometown of West Virginia was the first state to observe the holiday in 1910. By 1911, every state in the US observed and celebrated Mother’s Day.

I would not be the person I am today if it were not for my mom. My mom taught me how to read at an early age and always bought me books, including The Hobbit and The Lord of the Rings when I was nine years old. The next year, my mom got me a Super Nintendo with Final Fantasy II (which is now known as Final Fantasy IV). As a young teen, my mom would take me to see all my favorite bands in concert such as Metallica, Megadeth, and Slayer.

My mom always encouraged me to pursue my talents and follow my goals. When I wanted to be a musician, my mom bought me a guitar. Every time I broke guitar strings, she would stop by the music store and pick up a new set of strings. When I wanted to be a writer, my mom got me the latest version of Microsoft Word and always shared the short stories I wrote with extended family members.

She also taught me how to drive and helped me get my driver’s license. In order to save money for my first car, I started working at various shops at the mall and my mom always drove me to these jobs after school. Even during college, my mom supported me and was always there for me if I needed anything.

As an adult, I traveled, lived, and worked in different areas. Despite my lack of judgment in pursuing careers, my mom was always supportive of my career paths. While there were times that my mom had concerns about certain careers, she understood that sometimes people must experience things for themselves. Looking back, I would have done a lot of things differently in my career choices. Yet hindsight is always 20/20 and with every job or career path I regret, there were many positive experiences and lessons that I gained from them.

In regards to women and dating, my mom simply told me to stick to my own race. This was not a problem for me because I was never attracted to non-white women. Even if I found a non-white woman who liked heavy metal, video games, and fantasy books, I knew that dating a non-white woman would be unacceptable to my parents. Moreover, if I ever procreated with a non-white woman, the children would not look like me. That might seem superficial, but nothing seems more embarrassing than being a white man and having children that don’t look like you.

As we finished dinner, my mom told me about a new TV show called 90 Day Fiancé. For those unaware, 90 Day Fiancé is a reality TV show that follows American citizens dating foreigners in the hopes of getting married within 90 days to receive a K1-Visa for the foreigner. With a few exceptions, most of the couples are white Americans trying to marry non-whites. My mom reminded me that when she was growing up, her parents explicitly told her that she could only date white men of European descent.

For most white people, it might be uncomfortable to tell your children who they can or cannot date, marry, or procreate with. Nevertheless, my mom explained that 90 Day Fiancé openly portrays the non-white families of the show telling their sons and daughters not to date outside their race. The non-white parents have no problem expressing their desire for their sons and daughters to stick to their own kind so that their grandchildren will look like them.

In general, mothers tend to be nurturers, and fathers tend to be disciplinarians. Young kids need the nurture of their mothers while teenagers need the leadership and discipline of their fathers. We need mothers and fathers, in their own way, to instill in our children a positive white identity, a positive in-group preference, and the responsibility of maintaining our demographics. Just as we do not want to see our children destroying their lives with drugs, we also do not want our people to make life-altering mistakes that come with dating, marrying, or procreating outside their race. We are a people that are worth preserving. My grandparents shared this wisdom with my mom and my mom shared this wisdom with me. When I have children, I will also encourage them to date, marry, and procreate with their own kind.

This is not to say that the white women I have dated were perfect. I myself wasn’t perfect in my past relationships and I regret some of the decisions and choices I made with past girlfriends. Nevertheless, I appreciate my parents instilling in me a positive white identity and an in-group preference for dating. For all the mistakes I made, I have had a lot of great achievements and success thanks to the sound advice and wisdom of my mom.

Just like Eleanor of Aquitaine, my mother has made a lot of sacrifices for me throughout my life. The older I get the more I understand and appreciate all the things she has done for me. I know that I am incredibly lucky to have a mom that has been so supportive of me. I would not be the person I am today if it were not for the decisions and paths I took in my life. All of which have been supported in one way or another by my mom. A mother fit to be queen.