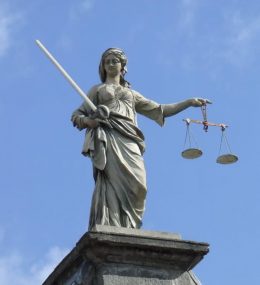 The prevailing conservative legal theory is ripe for a challenge in the nationalist era. Ever since the 1970s, originalism — which mandates a strict interpretation of the Constitution’s original intent — has held sway over the American Right. This mindset has resulted in a deification of the Constitution and the inability to recognize current predicaments as different from the 18th century.

All of our answers lie within the narrow confines of the Constitution’s original “public meaning”; there’s no need for any further inquiry. Originalism is largely responsible for Conservative Inc.’s masturbatory worship of the Constitution.

This theory seems ill-equipped to handle the crises of our current age and incapable of advancing a nationalist agenda. There is now a possible challenger to originalism’s reign on the Right — “common good constitutionalism.” Articulated by Harvard Law professor and integralist Adrian Vermeule, this theory aims to make the common good, not the Constitution’s original public meaning, the focus of jurisprudence. This is an attractive idea, but it can’t escape the insidiousness of its chief proponent. Common good constitutionalism could be far worse than originalism in practice.

Vermeule outlined his legal theory in The Atlantic last week. The Atlantic is not exactly the expected place to publish your argument for an authoritarian and reactionary regime. Liberals were furious that such an austere publication would post a “fascist” manifesto. Liberal critics made common good constitutionalism sound much cooler than it actually is. University of Baltimore law professor Garrett Epps compared Vermeule’s proposal to Falangism and worried it would bring tyranny to America. Many conservatives were also appalled by Vermeule’s idea, primarily for its dispensing with the Constitution and its’ “leftist” overtones.

Vermeule’s idea is worthy of criticism, but not for the reasons liberals shriek about.

The Harvard law professor begins his essay by stating how originalism has lived out its utility. He argues that legal conservatives embraced it to survive in a profession dominated by left-liberal theories. But now this is no longer necessary:

Originalism is now “an obstacle to the development of a robust, substantively conservative approach to constitutional law and interpretation.”

So Vermeule deigns to offer a more robust and more illiberal alternative:

This approach should take as its starting point substantive moral principles that conduce to the common good, principles that officials (including, but by no means limited to, judges) should read into the majestic generalities and ambiguities of the written Constitution. These principles include respect for the authority of rule and of rulers; respect for the hierarchies needed for society to function; solidarity within and among families, social groups, and workers’ unions, trade associations, and professions; appropriate subsidiarity, or respect for the legitimate roles of public bodies and associations at all levels of government and society; and a candid willingness to “legislate morality”—indeed, a recognition that all legislation is necessarily founded on some substantive conception of morality, and that the promotion of morality is a core and legitimate function of authority. Such principles promote the common good and make for a just and well-ordered society.

He adds: “Common-good constitutionalism is also not legal liberalism or libertarianism. Its main aim is certainly not to maximize individual autonomy or to minimize the abuse of power (an incoherent goal in any event), but instead to ensure that the ruler has the power needed to rule well.”

This sounds like music to right-wingers. A legal theory that upholds hierarchies and reorients itself to serving the collective good rather than individual autonomy?! BASED!!

However, one must ponder what judicial rulings we will see under a “common good” regime. Vermeule avoids specifics, but he does imply it would take away gun rights, suppress “dangerous” speech, and force everyone to receive vaccinations. He makes vague claims that abortion and sexual liberties would be treated differently under common good law, but doesn’t say how. If you did not know Vermeule was a self-professed integralist, you would think his essay is a call for liberal elites to have greater control over our lives. Judges and other officials would no longer be shackled by the Constitution or the pretense of objectivity — they would rule on whatever they think is the common good.

Vermeule wants the law to be based on morality and concerns for “human dignity.” An AWFL lawyer would say the same thing.

Even though this idea sounds good upon initial reading, it would be disastrous for it to ever gain power under our present circumstances. Our social morality doesn’t come from the Catholic Church or national tradition; it’s determined by secular liberals who believe the highest goods are diversity, equality, and tolerance. Judges operating under common good assumptions would rule in favor of whichever result upholds these virtues. Unless there is some massive cultural revolution awaiting us in the future, conservative morals will not influence these elites.

The only legal changes we can discern from Vermeule’s essay and past writings is that a common good order would enact gun control, impose hate speech laws, and mandate open borders. This isn’t the Catholic imperium trads envision.

It’s also hard to see how liberal elites would be upset with this framework. Plenty of liberal judges already make decisions based on what they think is morally right. They will protect illegal aliens and find the hidden constitutional amendment allowing the whole world to immigrate here if they think it’s for the “common good.” Vermeule allows liberal elites to dispense with any pretense of objectivity or concern for the Constitution. They only need to worry about the common good — as they define it.

Of course, this is not Vermeule’s intent. He wants judges to base their rulings on Catholic social teaching and to follow church orders. That’s only slightly better than the dictates of liberal elites. Vermeule believes a Catholic state should suppress the Dissident Right and outlaw “racism,” as stated in since-deleted tweets. His state wouldn’t allow whites to be armed or speak out for their interests. We would all have to accept the glory of having our nation invaded by millions of supposedly Catholic Mayans.

Vermeule’s immigration policy should disgust every nationalist and conservative. He demands America favor Catholics, which translates into a policy that would bar nearly all white immigrants.

This principle will disproportionately favor immigrants from Africa, Asia, and Latin America. (Note here that the priority is for actual Catholics, not for applicants from “historically Catholic countries”; relatively few Western Europeans will pass through the eye of the needle, and the Irish will be almost totally excluded). It will disproportionately favor the poor, and will draw no distinction between those seeking asylum based on a fear of persecution, and those fleeing “mere” economic hardship. It will, in effect, require opening the southern border of the United States. . .

The immigration proposal goes on to call for a one-world government ruled by the Catholic Church.

This is the “common good,” according to Vermeule.

Nationalists certainly need a new, more robust legal theory than originalism, but Vermeule is the last person we want to articulate it. This regime would just be a worse version of what we already have. At least current law allows us to have free speech, gun rights, and borders.

Common good sounds, well, good. However, it needs to spell out what is the common good. The common good under a nationalist regime would be that which serves the interests of the historic American people. It would not strive to conform to every single note of Catholic social teaching or see foreign elements as part of the body politic. The common good would not be an abstraction to the people–it would be their interests. Law-abiding Middle Americans would not have to worry about their gun rights or their communities ruined by Somali refugees. The courts would know that these actions go against the common good.

You cannot have a common good when the people share nothing in common. Vermeule hopes we turn into a Catholic nation, which won’t even happen with mass immigration from Latin America. Most American Hispanics leave the Church. What common good can be agreed upon in a multicultural, multiracial, multi-faith state? The unimpeded pursuit of money? Racial grievances against whites? “Liberty”?

Liberal commissars would come up with a more logical and more horrifying “common good” than Vermeule imaginary zealots.

The main legal concerns for nationalists right now are preserving our right to bear arms, our right to speak and associate freely, and our right to have immigration controls. Common good constitutionalism threatens all three; originalism doesn’t.

We certainly need an alternative to the worn-out legal theories of old. But Vermeule’s proposal ain’t it.

« The Silver Lining in the Apocalypse Museum

» The Future of the Past