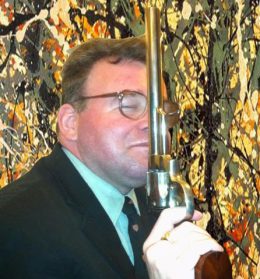 I must start with a confession. There never was a Bowden and I. The term implies an intimacy that I am sorry to say did not exist. And yet, it perfectly reflects a wish on the part of this eulogist that a relationship did indeed take place. The fact is, I never met nor entered into correspondence with the gentleman in question and that is, for me and many like me, a very great loss.

Indeed, the only sense in which there ever was a Bowden and I is that we share the same imprint, Wermod & Wermod, where my own debut novel The Partisan (2014) sits alongside Bowden’s titles like Axe (2014), Blood (2016), Heat (2017), Deadlock (2018), and a rather beautiful edition of Francis Parker Yockey’s Imperium.

So, for me, like many of us in the so-called Far Right, Jonathan Bowden remains only a mesmeric presence on YouTube, extolling the virtues of philosophers, writers, and activists like Savitri Devi, Julius Evola and W.B. Yeats in closed gatherings like the London Forum and at British National Party events, where he once served as the Cultural Officer, speaking to meetings the length and breadth of the land.

Bowden was a stubby, short, wave-haired man, blinking behind Brasillach-like glasses. A tweed-jacketed academic from the University of Life. An eccentric performer and a neo-Nietzschean orator stepping on stage to declaim that “Liberalism is moral syphilis.”

His distinctive voice and unique mannerisms distinguished him from the herd. He was a non-conformist willing to confront the shibboleths of the Left: “We are not equal.”

In all of these respects, Bowden was one of a kind. He was an original thinker expressing thoughts that could blow your mind, someone that could channel truths in the English tongue. He did the same through art, acting, and expositions that explored ways to reverse our decline; a pagan elitist pointing towards a rising sun: “Fire, Energy and Glory!”

He was Johnathan Bowden, a searing flame burning forever brightly in our collective memory.

« Sol Invictus’ In the Rain