The Rangers of the North 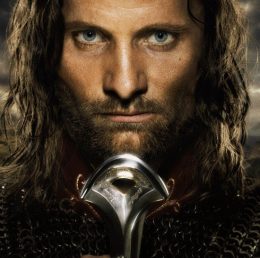 “Few now remember them . . . yet still some go wandering, sons of forgotten kings walking in loneliness, guarding from evil things folks that are heedless.” (Tom Bombadil, “Fog on the Barrow Downs,” The Fellowship of the Ring)

In memory of Christopher Tolkien

The Dúnedain were descended from the seafaring kings of ancient Númenor, who had settled Middle Earth in the Second Age. Befitting their high heritage, the Men of Westernesse possessed wisdom, beauty, and longevity far exceeding that of other men. When their northern wintry kingdom of Arnor was lost to the chaos of civil war and the armies of the Witch King, its survivors might have traveled south, rejoined their brothers in the realm of Gondor, and lived out their days in relative peace and prosperity. Instead, they and their descendants remained amidst the ruined citadels of their ancient kingdom, patrolling the wild forests and mountains and forgotten places of the world. They became the Rangers of the North, and their lives were dedicated to the defense of the Free Peoples of Middle Earth against dangerous beasts and monsters, and particularly against servants of the Enemy – the Necromancer, the Deceiver, the Dark Lord Sauron.

What roads would any dare to tread, what safety would there be in quiet lands, or in the homes of simple men at night, if the Dúnedain were asleep, or were all gone into the grave? [. . . If] simple folk are free from care and fear, simple they will be, and we must be secret to keep them so. That has been the task of my kindred, while the years have lengthened and the grass has grown. (Aragorn, “The Council of Elrond,” The Fellowship of the Ring)

The Rangers were tall, dark-haired, and grey-eyed. Their manner and appearance was grim, as they rarely left the wilderness and were engaged in constant battle against dark forces. Some, owing to their ethereal lineage and long memory, possessed the gift of prophecy. What most distinguished them was their nobility of spirit, which – while not immune to corruption – was nevertheless apparent even beneath the grime and rough habiliment of their wilderness wanderings. Indeed, this cold, magical quality rendered them an object of mystery and fear to the very people whom they defended. Theirs was a thankless task, as none knew their ancestry nor the purpose for their mode of living. From time to time they might go among the towns and villages, but even when among civilization, they were always in some sense apart.

Travelers scowl at us, and countrymen give us scornful names . . . Yet we would not have it otherwise. (Aragorn, “The Council of Elrond,” Fellowship of the Ring)

. . . the Dúnedain of the North . . . a strange people wandering secretly in the wild, and other men knew not their homes nor the purpose of their journeys, and save in Imladris, in the House of Elrond, their ancestry was forgotten. (“Of the Rings of Power and the Third Age,” Silmarillion)

In upholding their sacred duty, the Rangers were necessarily skilled with sword, bow, and spear, being granted fortitude and great ability from their ancient bloodline. Expert trackers, they were believed “to have strange powers of sight and hearing, and to understand the language of beasts and birds” (“At the Sign of the Prancing Pony,” Fellowship of the Ring). Perhaps this was simply a vestigial remnant of their high ancestry; but it may also be attributed to their remarkable powers of concentration and observation, in combination with a heightened empathy for all beings. They were also known to be great healers, possessing an encyclopedic knowledge of natural remedies as well as an uncanny ability to restore to health what had been given up for lost. Living in exile from their ancestral island home as well as their lost northern stronghold, the Rangers’ daily existence was now devoted solely to defending their land and the innocent from the depredations of the Enemy. All of their superior skills were devoted towards this end.

Most importantly, the Rangers of the North preserved the memory of their ancient kingdom. In their dreams they returned to the white marble citadels, towers, statues, and temples of their homeland, where an unbroken line of kings once reigned over a fair and wise people. They sang its songs, honored its gods, and maintained its traditions even as their great cities of Annúminas and Fornost crumbled into the sea, or slowly decayed into forgotten, moss-covered ruins. The heirs of its high king maintained their bloodline better than most and preserved the shards of Narsil – the holy blade that defeated the Enemy at the end of the Second Age, and which would be re-forged when it was needed. And they never forgot who their ancient Enemy was, no matter how fair and tempting his servants and gifts might be, and swore eternal hostility against all who threatened the peace and order of Middle Earth.

But my home, such as I have, is in the North. For here the heirs of Valandil have ever dwelt in long line unbroken from father unto son for many generations. Our days have darkened, and we have dwindled; but ever the Sword has passed to a new keeper. . . . Lonely men we are, Rangers of the wild, hunters – but hunters ever of the servants of the Enemy; for they are found in many places, not in Mordor only. (Aragorn, “The Council of Elrond,” Fellowship of the Ring)

For most of their existence the Rangers of the North, sworn to serve their king, had no king to serve. Their task therefore consisted of protecting those whom the king would defend, upholding order, repulsing the Enemy, and keeping the memory of their kingdom alive. As the world continued its descent into darkness, their numbers diminished and their blood became diluted. In time they dwindled into a small and scattered remnant bound only by heredity and ancient oaths. Despite their solitary existence, when the need arose they knew where their sworn brothers could be found, and despite their small numbers, their valor and superior skill made them a formidable force when united.

Where now are the Dúnedain? Elessar, Elessar?
Why do thy kinsfolk wander afar?
Near is the hour when the Lost should come forth.
And the Grey Company ride from the North.

It may be that our fallen world is lost, beyond all saving, until this age passes and gives way to another. It may be that “the race of the Kings from over the Sea is nearly at an end . . . that this War of the Ring will be their last adventure” (Gandalf, “Many Meetings,” Fellowship of the Ring). Or perhaps the remnants of this noble race will once again unite to defeat the Enemy and restore our lost kingdom. Regardless, let us follow the path of these Rangers of the North. Exiled from our true home, let us walk the earth, doing battle with injustice and untruth where we find it, keeping the noble ways of our ancient kingdom alive in the midst of a fading world. Let us be stern of appearance, laconic of speech, adept in combat with sword and word. Above all, let us not forget that, however solitary we might feel, we are never truly alone: we stand, blessed by our ancestors, with a band of brothers whose strength – when united – would make the earth quake and the forces of evil tremble. This may make us an object of fear and loathing to the men of the farms and villages; but we are the Rangers of the North, and we must play our role until this age passes away, the white tree blooms, and the true king sits upon the Vacant Throne once more.