The Many Faces of the Jewish Elite: Part 3 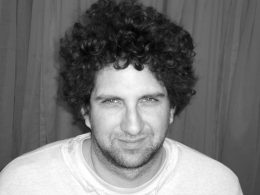 You can always tell an enemy by the way he’ll attack you in the name of peace. He’ll claim he supports freedom, but will try to restrict yours in the name of freedom. He’ll speak loudly of universal standards, but will apply them only in a restricted manner. . . against you. You see, he doesn’t like you. He doesn’t want to share a room with you. Or a house or a town or a city or a country. He just wants you gone. And when he speaks out against you as a violator of some moral system, he’s doing it only to rationalize his irrational hatred for you, and to drum up that same hatred in others. The fact that he himself is violating this same moral system when singling you out goes completely unnoticed.

There is no reasoning with an enemy like this. Noah Berlatsky is one such enemy.

Berlatsky is a male feminist freelance writer with whites-on-the-brain disease. He doesn’t seem to be taken very seriously on the Left. Even feminists don’t take him seriously. According to his byline, he’s a “cultural critic” and he likes to focus on crosshatching disparate aspects of pop culture to come up with some unique spin in his articles. For example, he has written about the dearth of men in the television show Orange is the New Black, the abusive relationship of Miss Piggy and Kermit the Frog, why it is appropriate that kids today appreciate Kanye West more than Paul McCartney, and how Annie Lennox’s anti-twerking stance is both anti-feminist and racist.

Sure, this is pap, and in a just world we could afford to ignore twits like Berlatsky. But this is not a just world, and because Noah Berlatsky hates white people and has a large audience, he must be taken seriously. So let’s hold our noses and dive in to his latest bit of anti-white calumny: In his January 17th article “Trump Voters Motivated by Racism May be Violating the Constitution. Can They be Stopped?” Berlatsky seems to be making the legal argument against voting for Trump. But really, he’s making the legal argument against white people voting in their racial interests.

Like its author, his argument is shallow and tenuous. It goes something like this (try not to laugh):

Berlatsky trots out law professor Terry Smith, whose ideas these are, to substantiate his anti-white bias. I’m suspecting that Smith’s book Whitelash: Unmasking White Grievance at the Ballot Box is so overtly partisan as to not even warrant a review. Anyway, Berlatsky stops short of calling for the arrest of all white Trump voters and instead asks that we end gerrymandering and voter ID. According to Berlatsky:

Smith argues that we could remedy these disparate, racially motivated outcomes by creating Senate districts. Presumably, that would make it at least possible for black voters to elect a senator who would support their interests.

From a hard Left standpoint, this article is a letdown. There are no calls for violence or immediate action. It’s nothing brilliant based on its merit, either. But from a Dissident Right perspective, the article should be noteworthy for two reasons — the first being its attempt to get around the law and the imperative behind it as codified in the Constitution. In the American republic, citizens have a God-given right to vote any way they want for whatever reason they want. That was one of the rules set up by the Founding Fathers, and it should be written in stone as long as the United States exists. Berlatsky wants to change this in the same way that lefties want to get around the First Amendment with hate speech legislation, and the Second Amendment with gun control. It’s a form of cheating, really. And its abject hypocrisy makes it all the more appalling: I’m loading my gloves in the name of fighting fair.

Berlatsky and his ilk are fighting a war of demographics, and their endgame is to strip the enemy — and only the enemy — of his human rights. All in the name of freedom and equality.

The second noteworthy thing about Berlatsky is his racial animus towards whites. He seems perfectly comfortable with criticizing whites qua whites while never daring to do the same with other racial groups. He dismisses whites who vote in their interest as racists before evaluating any of their claims:

Yes, a disproportionate number of Mexican immigrants, especially the illegal ones, are rapists and criminals. Yes, many of the claims that race realists make about race are true and backed up by research. Yes, Trump repudiated David Duke numerous times (not that Duke deserves it any more than the hardline left-wing activists at the SPLC or ADL). This is also more than what the current crop of Democratic candidates had to say about Antifa. And yes, America was greater when it was a white ethnostate. At the very least we had better education and less crime.

And since when is fifty-eight percent considered to be “whopping?” Note how Berlatsky makes sweeping statements about “white people” when he has a problem with only fifty-eight percent of them. This should be a clear tell for anyone who still thinks this truculent fink is telling the truth.

Another tell appears in how he (quite sloppily) accepts black voters voting in their racial interests, but not white ones. He shouldn’t have admitted as much if he wanted to at least appear impartial. But he let the mask fall anyway. If voting according to race is bad, then he should excoriate blacks for doing it as well. But he doesn’t. This brings us back to our opening paragraph — one’s enemy can never be expected to act consistently. He sets up a system of morals in order to demonstrate how you fall short of this system while never applying this same system to himself or his allies. You see, the devil is in the details, and the devil would rather you not investigate the details.

And speaking of devils, let’s talk about the five-hundred pound, gorilla-suited, elephant-shaped one in the room. Noah Berlatsky is a Jew — more specifically a liberal diaspora Jew (or LDJ, as I call them). There is also an excellent chance that the people publishing him and editing his work are LDJs as well, given how it’s an open secret that Jews dominate the media. Okay, well, if LDJs like Berlatsky wish to criticize whites qua whites, then whites should be able criticize Jews qua Jews. And regarding Jews there is a whole host of things to complain about. For instance:

I could go on, of course. And I have in the past.

Of course, the moment an influential or mainstream white goes down this route, he will be labeled anti-Semitic and catch more grief than any one person should be allowed to catch. He could lose his social media presence, his job, his career, his family. Meanwhile, anti-white bigots like Noah Berlatsky are still writing and still working.

So is it wrong to say that these liberal diaspora Jews can dish it out but they can’t take it? Are whites just not supposed to notice such a double standard? Or are we to notice it and accept it meekly, like a defeated people?

If any doubt remains about how Berlatsky hates white people, take a gander at the last two paragraphs of his astoundingly hateful January 2019 article “White Kids, Racism and the Way Privileged Parenting Props Up an Unjust System.” In it, he discusses a book by sociologist Margaret Hagerman and advises white parents to be bad parents thereby ensuring that their children fail [emphasis mine]:

As for white adults, Hagerman says, if they really want a less racist world, they may need to rethink how they approach parenting. “Everyone is trying to do the best for their kid,” she says. “But I actually think that there are times when maybe the best interest of your own kid isn’t actually the best choice. Ultimately, being a good citizen sometimes conflicts with being good parents. And sometimes maybe parents should decide to be good citizens over being good parents.” That could mean voting to raise taxes so to better fund public schools. Maybe in our case it should have meant choosing a public school rather than a private one.

Of course, as a parent, you want the best possible future for your child. But the best possible future should include a society that isn’t organized around racism. Hagerman’s book is a careful, painful and convincing argument that when white people give their children advantages, they are often disadvantaging others. Racism is so hard to overturn, in part, because white people prop it up when they work to make sure their children succeed.

Is Margaret Hagerman Jewish? I have no idea, but I am willing to bet that either she is or she is married to one. Speculating along these lines may seem ugly, I know. And the normie in me, which is still (still!) working from a philo-Semitic baseline, recoils at such ugliness. But given that Hagerman wrote a book entitled White Kids: Growing Up With Privilege In a Racially Divided America, she certainly doesn’t shy away from what’s ugly. And given that the Great Replacement is real and white extinction is a definite possibility in the West in the next century or so, I’d like to know who my enemies are. Is that so unreasonable?

After all, one’s enemies will be anything but reasonable.