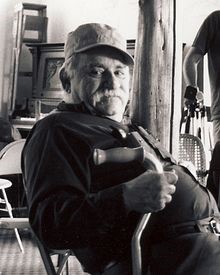 With the early successes of Earth First! came the envious spite typical of the doctrinaire Left — who, despite their constant denunciations of ugly noxious screeds are themselves often quite guilty on that score. The opening salvo was fired by Murray Bookchin, a bloviating Hegelian from Vermont (by way of New York City). This was a man whose vituperative style and all-around prickliness eventually led even his own disciples to concede that he set back the cause of the American ecology movement for decades. He had been laboring for years on a turgid, vaguely Hegelian theory known as “social ecology,” which traced all of the world’s ecological ills to the existence of hierarchy, rank, and differentiation.

Bookchin’s polemic was met with indignation and ridicule from the Earth First! old guard, and had little immediate effect. It would take a few more years before another, far more successful form of leftist entryism fully engulfed Earth First!, marking an end to its brief glory days as a truly ecocentric Männerbund.

Towards the end of the eighties, signs of strain began showing. Dissident voices appeared in the Earth First! Journal, expressing discontent with the old guard’s indifference to leftist social justice, opposition to immigration, and draconian approach to population control. The California EF! group was effectively taken over by Judi Bari, a labor organizer who cut her teeth in anti-war and anti-capitalist activism before seeing the potential manpower to be gained from the limp-wristed acolytes of radical ecology. She was later elevated to the communion of leftist saints after a botched car-bombing — likely the work of anti-environmentalists or FBI agents provocateurs — almost led to her death.

Bari oversaw a complete transformation within California Earth First! that involved a growing emphasis on social justice, women’s issues, alliances with timber workers, a denunciation of tree-spiking, and an attempt to turn what had formerly been a tight-knit radical vanguard into a mass political movement. “Dave Foreman wants Earth First! to remain small, pure and radical,” she was quoted as saying; “I want it to be big, impure and radical” (13). And that about sums it up.

The crowd that gathered around Bari was what one would expect: long-haired dope-smoking hippies, black-clad urban anarchist vegans, budding social justice warriors, and POCs eager to accuse another predominantly white group of implicit racism. The old guard, with their ecofascist, racist, sexist, Neanderthal ways, were minimized within their own movement, leading critics to dub them the “Arizona Junta” and the “Foremanistas.” And since Earth First! was a democratic movement, devoted to anarchic principles and democratic decision-making, there wasn’t a damn thing they could do to stop it. In a short time, the remainder of the old guard had left to found wilderness-preservation organizations of their own.

Despite its founders’ hopes, today EF! is truly nothing more than a handmaiden of the anti-capitalist, anti-oppression Left, its adherents indistinguishable from others of their ilk that can be found in fair trade coffee shops and gender studies departments across the nation. They say that the revolution eats its own children, and this is proving to be the case for the EF! social justice warriors of the 90s, who are now shocked to find themselves accused of “oppressive behaviors” and cisnormativity by the next wave of transgressives. Of course, this is the same treatment they gave Foreman and his Death Squads back in the 80s.

These days the organization is constantly on the verge of civil war. “Male-identifying whit cis hetero” activists are perpetually “called out” by POCs for failing to make EF! a safe space for entryists. Ecofeminists rabidly accuse the submissive manlets in Earth First! of sexism and patriarchal privilege. The most recent kerfuffle centered around the purported discrimination against transgendered activists, who must be swarming into Earth First! in droves judging by the amount of journal space devoted to their plight.

It is almost a microcosm of the New Left as a whole, really: homosexuals attack transgenders, transgenders attack feminists, feminists attack indigenous traditionalists, indigenous traditionalists attack the animal rights crowd, and the animal rights crowd attacks kosher Jews. Their sole adhesive is a hatred for the historic American nation and everything it stands for. 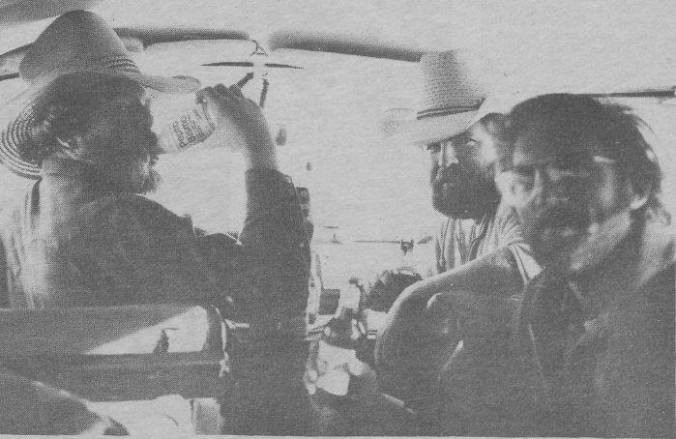 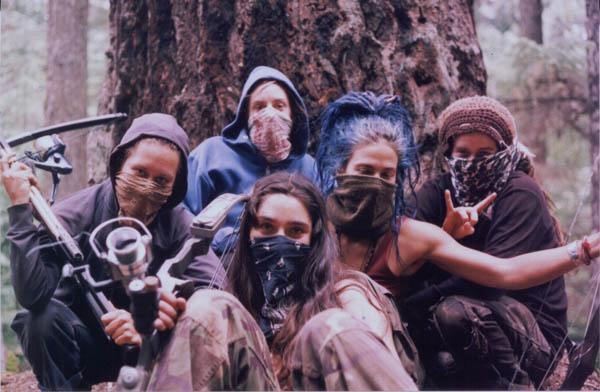 Needless to say, whatever potential Earth First! once had as a revolt against the modern world is gone. It has now been utterly defanged and submerged beneath the usual maelstrom of leftist contradictions and petty infighting. The great irony of this outlook on the part of the leftist environmentalist is that, while he thinks he of himself as a rebel against the evil empire — against the capitalist, the totalitarian, the Nazi forever lurking at the edges of his frenzied imagination — he is in fact nothing more than a useful idiot serving those very forces. In his universalism, secularism, and obsession with a poorly-conceived social justice, he sets himself against the last vestiges of traditional society, thereby destroying the remaining bastions of communitarian values and one of the few things standing against the onslaught of dehumanizing technology and a globalized corporate capitalism.

What are the lessons to be learned from this failure?

The first is that, whatever its historical roots, in the United States the environmental cause is now squarely in the hands of the Left, indelibly tainted by its commitment to diversity, replacement-rate immigration, cultural degeneracy, feigned opposition to global capitalism, and all-around tolerance indistinguishable from nihilism. This is hardly surprising. While the contemporary American Left is only nominally indebted to the land-raping ethos of classical liberalism, the so-called “Right” in America is simply a more orthodox manifestation of this same Enlightenment creed. Both groups regard ecosystemic health, wilderness preservation, and the vestiges of traditional society as a luxury that can be subordinated to short-term material comfort, and many Americans are happy to agree with them.

So one lesson is that, if one should undertake to establish an independent environmental organization in the US, no matter how “beyond left nor right” it claims to be, we can expect it to be inundated by howling leftists in a matter of years. Unless, of course, it is tied to an explicitly rightist social vision from the very beginning.

A related lesson to be learned from the Earth First! travesty is this: inclusiveness and democratic governance will bring death to any group wishing to maintain ideological purity without being subsumed by the leftist juggernaut. Foreman, Wolke, Koehler, and the other knights of that original noble Männerbund believed there was sufficient agreement among themselves to permit a relatively consensual and egalitarian functioning for their organization, and that people would only seek to join the group if they agreed with its basic premises. In this they were mistaken.

Democracy and egalitarianism may very well work in situations of high cohesion and shared worldview, but as the group grew, so did its beautiful diversity of values. In time, the motley assortment that made up Earth First! could barely agree on how to roll a proper spliff, let alone a strategy for saving the old growth forests. The founders were sorely deluded if they believed they would be left alone by those who did not share their fundamental premises. The leftist, given his totalitarian nature, cannot abide the existence of people who are not wholly under his sway, especially those with the gall to encroach upon his territory, who try to “co-opt” the cause of the environment.

One might imagine a different story for Earth First!, in which it retained its initial elitism and opposition to movement building. One of the earliest aims of Earth First! was, in fact, not to become a movement in its own right but to “subvert” the mainstream wilderness conservation movement, carrying out “a friendly infiltration in an effort to strengthen and return an organization to its original principles — a revival, house-cleaning, de-bureaucratization if you will” (14). In addition to wilderness preservation groups that might be open to such influence, one might include anti-pollution, animal welfare, urban renewal, historical preservation, renewable energy, and religious organizations. Had they pursued this more passivist strategy, and aimed to take over specific territories while building their own power, the organization might have been more successful in its aims and less prone to subversion (both by the Left and by the FBI).

There is the question, of course, as to whether this rightist entryism is even viable in today’s climate. Leftist entryism succeeds because the Left is in power, and its core values of inclusivity, equality, individualism, and democracy cannot be questioned without severe consequences. What corresponding values does the Right have that can possibly serve as an effective counter? Hierarchy, purity, elitism, communitarianism; these are unlikely to have much traction among today’s mainstream liberals or conservatives.

For the reactionary entryist (if one should choose to accept such a mission), the rightist values that still seem to have some power in American culture are religion and patriotism. The Left, of course, has made some inroads in commandeering both to its cause, but many people still seem to suspect the disingenuousness of their proclamations. Making wilderness preservation a religious duty and an expression of love for the land may be the most effective approach to appeal to Americans without committing oneself to the dogmas of the Left and opening one’s group to subversion.

Earth First!, needless to say, has become wholly compromised. The purpose of this essay is not to criticize those truly dedicated ecowarriors, both past and present, whose commitment and purpose (if not their strategic bent) is unquestioned.  However, this organization now lacks the one quality most essential for any revolt against the modern world: iron.

Perhaps a genuine concern with ecological integrity can become a key component of the American Restoration, as my previous article suggested. This would entail a retention of radical ecology’s counter-modernism, its holistic metaphysics and commitment to wilderness preservation and rejection of sentimental humanitarianism, while jettisoning its counter-productive attachment to anarchism and simplistic views on technology and economics.

Those of a truly ecological bent, who love the wild places of the world, who believe that the good of the whole is primary to the needs of the individual, and who are willing to do whatever is necessary in order to preserve the integrity and beauty of the Earth, must adopt a politics that is as hierarchical and transcendent as their ideals. Their natural home lies on the Right.