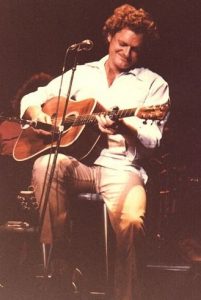 Number nineteen was the folk-rock classic “Cat’s in the Cradle” by Harry Chapin. I remember my father playing that song for me as a kid, and I wasn’t terribly impressed with it even back then. Something about it just seemed too neat and clever. Since then, I’ve learned to appreciate irony, but not when someone beats you over the head with it. The narrative twist at the song’s end is a little too perfect, and once you know it’s coming, the song loses much of its appeal.

For those who don’t know it, “Cat’s in the Cradle” tells the story of a father who’s too busy to spend time with his adoring son. And each time he puts off playing with him, the boy promises to grow up just like his dad. Well, fast forward thirty years, and the old man’s feeling a little lonely and asks if he can visit with his son for a while. But guess what? The kid is now too busy to spend time with his old man. And when he hangs up the phone, the father laments that his boy had indeed grown up like him.

The song is pure hokum. Lyrically, it’s about as impressive as a second-place winner in a high school poetry competition. And as a young man, after reading a couple of rock critics who more or less agreed with my assessment of the song, I put it in a box in my mind labeled “Cornpone” and never opened it again. This conveniently prevented me from having to think about the song. Whenever I heard it, I’d laugh at its unsubtle attempts at audience manipulation and then congratulate myself for being able to separate the corn from the cob.

Well, I’m not laughing now. I’m crying. Now that Rick Beato has forced me to listen to the song beyond the context of its lyrics, I realize to my chagrin that he is absolutely right! “Cat’s in the Cradle” does have a great acoustic guitar intro, which Beato defines as “an identifiable instrumental hook called a signature that begins the song.” Once you hear it, you recognize it and you never forget it. This intro is as good as anything in pop music, and Chapin makes excellent thematic use of it throughout the song. Perhaps this is why it was a number one hit in 1974. It hurts to think of all the years I could have been enjoying this fine piece of music when I was too busy to even listen – just like the father in the story.

Anyway, this is a curious bit of psychology. Our minds are like bookshelves in our bedrooms, and our memories and ideas are like the books themselves. Some people have deeper shelves, taller walls, better lighting, greater square footage. Some of us put our books in closets; others leave them strewn about the floor. Some of us put our books in boxes to make room for other books. When I rediscovered “Cat’s in the Cradle,” I was reminded of how important it is to understand that despite whatever use we get out of these boxes, they do prevent us from thinking about what’s inside. And opening a box much later than you should have may be thrilling, but it can haunt you nonetheless.

This realization struck me at a crucial moment while I was writing my novel White Like You. You see, I had what I thought was a clever idea. Have a villain whom the reader does not recognize as such right away, and then reveal his villainous nature through his hyper-literate anti-Semitism – because anti-Semitism is always and everywhere bad, right? Orson Welles pulled a similar trick in The Stranger in 1946 when a fugitive Nazi (played by Welles) gave himself away simply by pointing out that Karl Marx was a Jew, not a German.

Nine years ago, when I started the book, I was very much the pro-white, judeo-friendly neocon who was quite ardent about his support for Israel, his antipathy for Islam, and his Taylorian race-realism. I had known Jews all my life, and once I was old enough to know better, I stuffed all bad thoughts, information, and memories about them into a box labeled “Do Not Open,” taped it up real good, and stuffed it away somewhere nice and inconvenient. Armed with Paul Johnson’s A History of the Jews and Robert Wistrich’s Antisemitism: The Longest Hatred as well as an appreciation for Jewish conservatives like David Horowitz and Daniel Pipes, I was convinced I had done the right thing.

Writing White Like You forced me to open that box. I was confident that I could master its contents (and not the other way around). In either case, I had no choice. I had to make my villain’s anti-Semitism both formidable and real. And this meant research. I wasn’t afraid of doing research, but at the time all I knew about the Dissident Right (or perhaps “Alternative Right,” as some may have been calling it back then) was American Renaissance and Stormfront, which, frankly, I was too scared to go on. To create a truly anti-Semitic character, I had to essentially start from scratch.

I went on Stormfront and other sites, and as I was poking around the edges of the dextrosphere for information and anecdotes to put in the mouth of my antagonist, I began to realize something: The arguments from these bad-thinkers seemed to hold together pretty well. Unexpectedly well. Sure, there were some unstable and paranoid individuals out there. But for the ones that weren’t – for the ones who were merely angry or resentful, yet still clear-headed – I had nothing. This made sense since they had done their homework on Jews, while I hadn’t even known that any homework had been assigned. People kept mentioning philosophers I had never heard of and historical events I never knew happened. I had never heard of the Holodomor. I hadn’t known about 200 Years Together or For My Legionaries. People kept referring to The Occidental Observer, as well as Counter-Currents, where I found Greg Johnson’s dissertations on Jewish power quite jarring and hard to refute. I couldn’t believe I was actually taking this stuff seriously. To put it all to bed once and for all, I decided to read Kevin MacDonald’s The Culture of Critique, since everyone was talking about it. To say I went in a critic and came out a convert might be overstating it a bit. But as I was reading it, I could feel my philo-Semitic angels dying one by one. I imagined I could hear them scream.

I was a different person when I finished The Culture of Critique, all because I saw a box in my mind and decided to open it. For me, this has been an enlightening experience and began the career I now have as a writer (my anti-Semitic villain became both sympathetic and enigmatic in my novel). But it has also been dangerous, since it has made me into a real dissident. White, Western-chauvinist neocons do get a measure of protection from Jews while still being able to express, if obliquely, their quite natural feelings of tribalism and race-realism. It also allows them to whack the Left like a piñata and not get whacked back so much. This is where you get people like Gavin McInnes and Tommy Robinson and their sixty percent solutions. They’re playing it safe, and so we can barely taste the poison in their brew. Most of us on the Dissident Right, however, have decided to forego this safety for the sake of the Truth, as well for the now-uncertain future of the white race. That’s a little more important than whether or not Jews ultimately approve of our activities.

Opening this box was dangerous for another reason: It could lead to obsession. After all, some boxes are sealed for good reason and should remain that way. Some people, as if to make up for lost time, dive into these boxes and never come out. I’d be lying if I said I wasn’t concerned about becoming obsessed with Jews (I’m not) or hating them (I don’t) as a result of all that research. And, as I am sure many of us know, that temptation is always there. It’s a little like playing with fire.

Anyway, perhaps it’s a good idea to rummage through the boxes in our minds from time to time. It keeps us honest and challenges us to challenge ourselves. This is the best kind of self-improvement, in my opinion. It can lead to life-altering realizations. But it can also lead to delightful moments like rediscovering a song.

» Communist Entropy in the Chilean Miracle